Tahiti: EGIS takes the Papeete airport concession then loses it, for now

France’s Egis is a public sector organisation which, like VINCI and Groupe ADP, invests in and manages airports abroad.

Unlike them, Egis is not so well known, possibly because the airports it gets involved with are often small and remote, even though it does have an interest in a sizeable Brazilian airports by way of consortium concession, and has pitched in for others, there in Brazil and in other countries.

Now it has taken on a lengthy concession for the Papeete Faa’a Airport in Tahiti, one that is still influenced by the effects of the pandemic and one that will test its managerial capabilities to the full. Or at least it had until a judge annulled the contract on the basis of alleged rule breaking.

France’s Egis Airport Operations, together with Caisse des Dépôts et Consignations in a consortium, won the Papeete Faa’a Airport concession in Tahiti, French Polynesia, for a period of 40 years in Sep-2021.

The offer for the concession was launched two years ago, with the concession covering runway works and canal draining works, as well as terminal and car park redevelopments.

Faa'a International Airport is the only airport with international services in French Polynesia, with Papeete having direct connections in normal times to major cities in the South Pacific, New Zealand, Australia, Japan, North America and South America. The airport also has extensive connections to islands and towns across French Polynesia. It is the hub for the national carrier Air Tahiti Nui and regional operator Air Tahiti.

In an official notice Egis Airport Operation said it was the consortium chosen by the state following an award procedure launched in 2019. The consortium formed brings together the Caisse des Dépôts et Consignations and Egis.

There will be a significant degree of investment. More than XPF26 billion (French Pacific Francs) or USD253 million will be invested by the concessionaire company during the 40 years of the concession. The first projects are expected to start in mid 2022.

The High Commissioner studied the investment programme, as well as the quality of service and sustainable development commitments, to ensure that they met high standards of achievement. Tahiti-Faa’a international airport is considered a key factor in the development of the territory, as well as an essential contact point for connecting French Polynesia and the rest of the world.

The concession company will be incorporated next year. A global presentation giving the general public the future format of the airport is being developed with the country.

The airport’s current route map shows that there is a myriad of services within French Polynesia, to more than 40 of the 100 islands on which live 280,000 people in total. But there are no services to other islands in the South Pacific, nor to Australasia.

There is one mid haul route (Honolulu) and three longer routes to Los Angeles, San Francisco and Vancouver, via which many places in the world can be reached with one change. 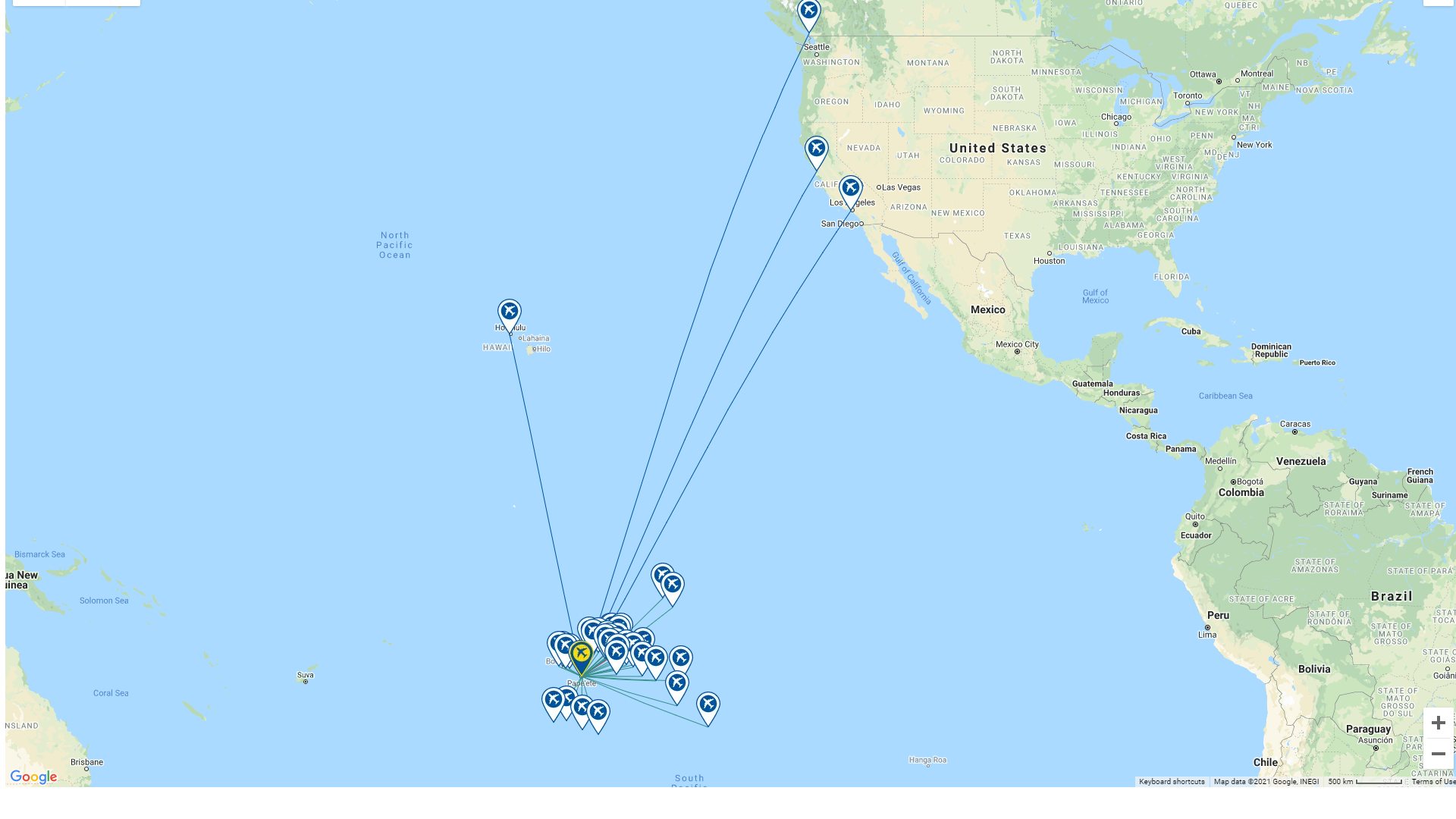 Air France’s and Air Tahiti Nui’s Los Angeles route continues to Paris (not on map). LATAM Airlines Chile has operated Santiago-Easter Island-Papeete, but is not doing so presently.

Air Tahiti is the regional airline which operates the extensive interisland hopping network with a fleet of ATR regional aircraft, and it offers both scheduled and charter services.

Between Air Tahiti and Air Tahiti Nui they account for almost 92% of all seat capacity presently. 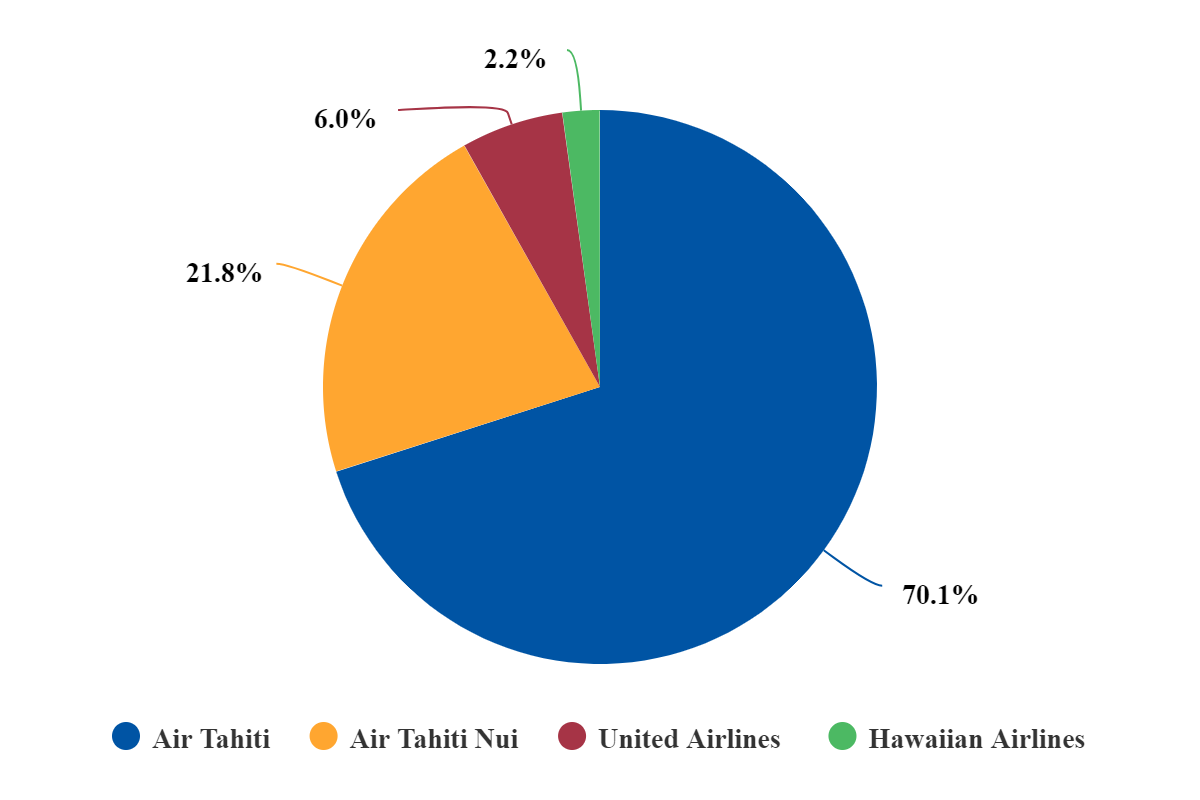 Faa'a airport has not really grown in two decades, and occasional political disturbances cannot be held as a reason.

There are no LCCs operating at Tahiti; the market is not really built for it, with a lack of high volume routes. But it is also the case that the airline alliances are not well represented, with only 6% of capacity on one alliance – namely Star Alliance.

With regard to the coronavirus pandemic, there has been little consistency to the supply of capacity in both the domestic and international segments.

Domestic capacity collapsed in the first few months and then recovered quite strongly through into 2021, but latterly has dipped below 2020 levels. International capacity showed no consistency whatsoever through 2020 but stabilised in 2021, and at the end of Sep-2021 was at its highest level since Mar-2020.

The chart below is an amalgam of domestic and international capacity and as of the week commencing 25-Oct-2021 that total capacity stands at 59% of what it was in the same week of 2019 (international at 45%),   and with the anticipation that it will remain at that level well into 2022. 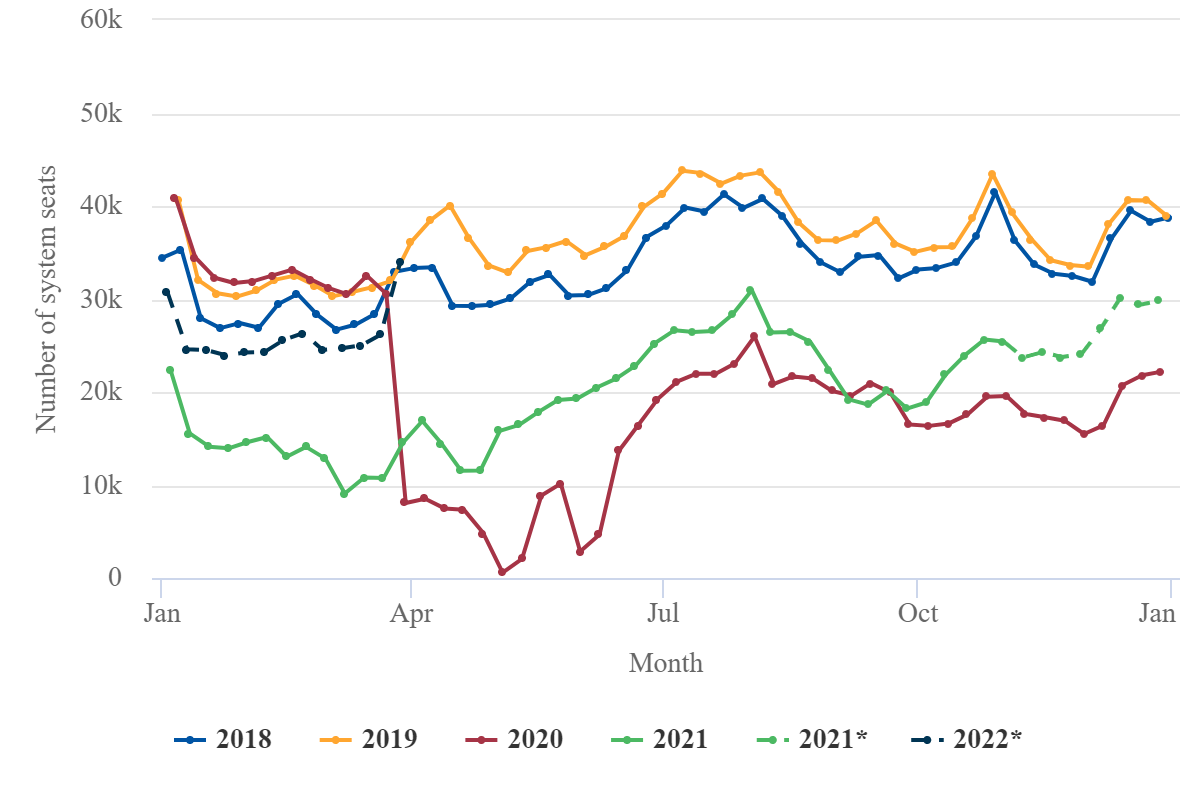 Tourism limited to a small group of countries

Tourism, which grew smartly in 2018 and 2019, is an important industry for the whole of French Polynesia. As with so many other places, it reduced enormously in 2020, and there has been no recovery this year either. 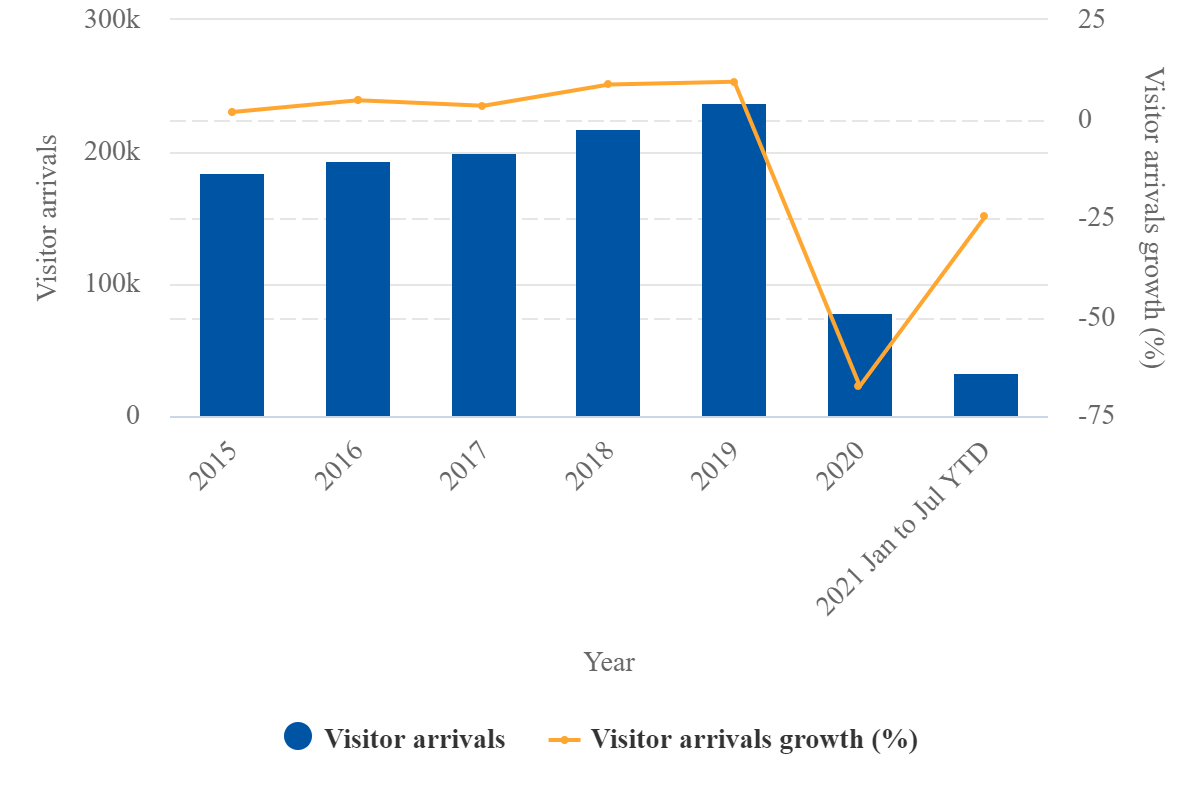 In 2019, and again in 2020 during the pandemic, the majority of foreign visitors were from France, of which French Polynesia counts as an overseas country (territory), and from the US, where there are flights from Hawaii and the West Coast, as detailed previously.

The chart below is for 2019 and reveals the relative paucity of visitors from other countries, with Italy, Australia, Japan, New Zealand and Canada all on 3.4%-3.5% of the total, and European countries where the population has a high propensity to travel, such as the UK and Germany, not to mention China, barely figuring at all.

Visitor arrivals by market for 2019 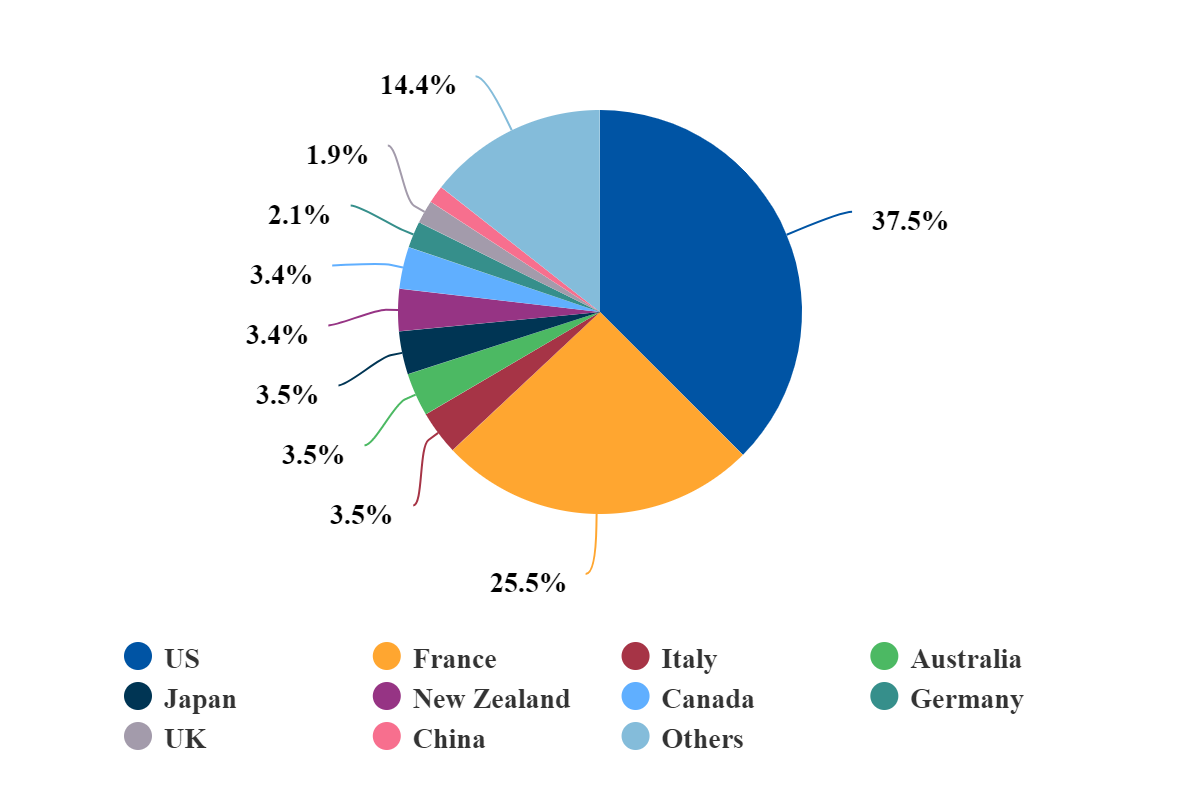 One of the first jobs to challenge Egis and Caisse des Dépôts will be to enhance the route network to the point where French Polynesia and Tahiti can be considered vacation destinations in their own right, rather than as brief stopover points on a round-the-world trip, which is mainly what the route network caters for now.

So there are numerous issues facing this consortium: a slow recovery from the pandemic; tourism in decline; an insufficient network even for the times; traffic that hasn’t increased in 20 years; and a bill for infrastructure.

According to the CAPA Airport Construction Database, there is currently no active infrastructure construction, the last works having been completed four years ago.

So why would Egis in particular take on this challenge? Fundamentally, because it has experience in the ‘Third World’ and in remote locations. 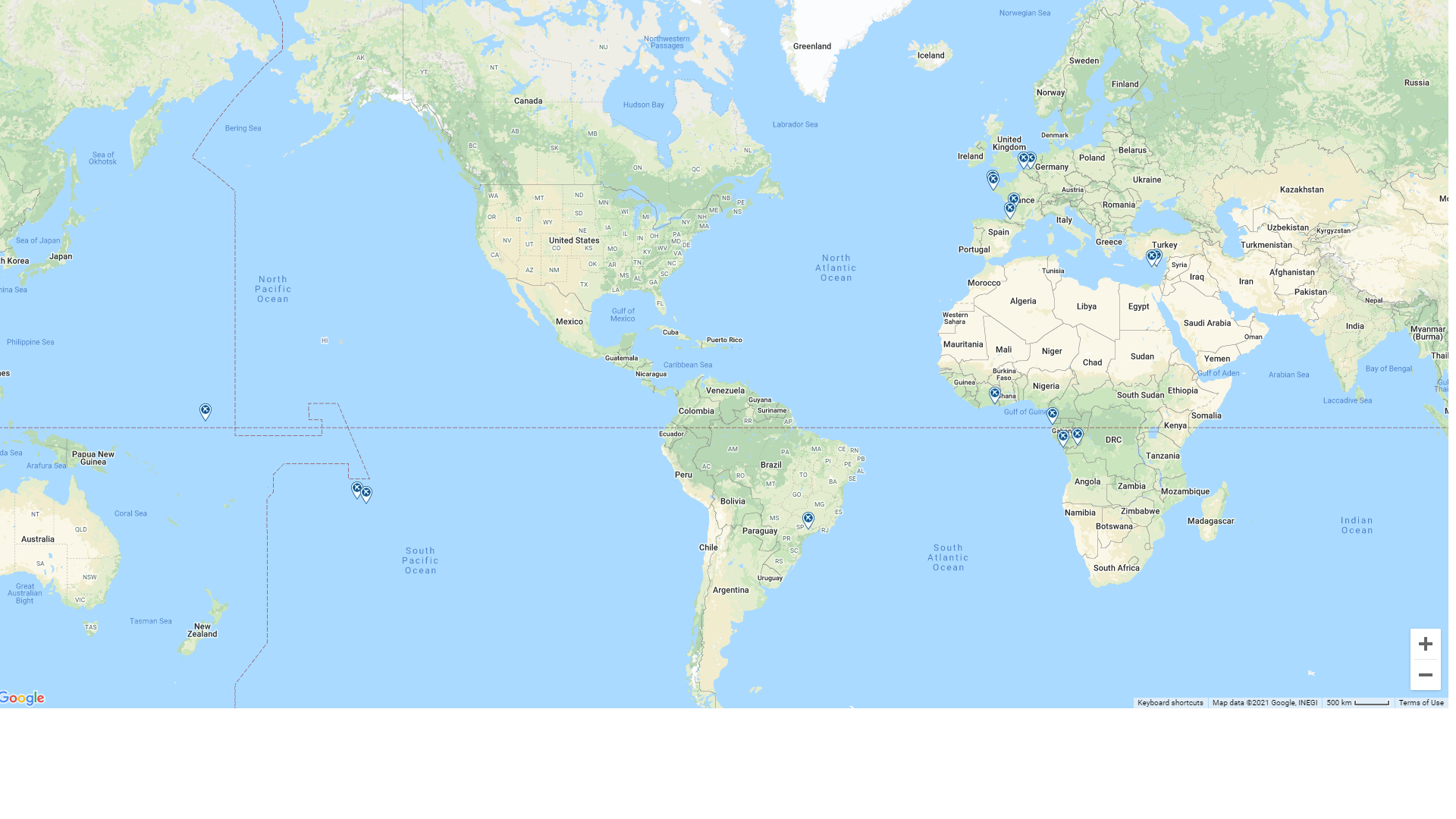 Similar in its organisation to the better-known French firm VINCI, Egis is concerned with road concessions, toll services, ports, tramways etc.; but for about 15 years has been keeping an eye open for PPP airport investment opportunities such as the Hermes project in Cyprus (Larnaca and Paphos airports), where it is a 20% shareholder and where it believes it can “add value”. Egis has a subsidiary, Egis Investment Partners, which is supported by the Caisse des Dépôts.

Managing a small number of French airports, it has had – and retains – a number of airport investment and operations in Africa, although it did exit the Libreville Airport in 2018 alongside its partner there, Marseille Provence Airport.

Egis also has interests in two airports in Belgium (Ostend-Bruges and Antwerp), but its main focus at one time was on Brazil, where it took a stake in the concession on Campinas Viracopos airport (near São Paulo), one which has proven difficult, and sought to participate in the concessions of Rio de Janeiro Galeăo International Airport and Belo Horizonte Tancredo Neves International Airport. Also Fortaleza, Salvador, Florianopolis and Porto Alegre airports.

In Mar-2021 Egis said it was interested in acquiring a stake in Warsaw Modlin Airport – which would be a brave move while the new Central Poland Airport is being finalised.

But most important was the Mar-2017 transaction by which the Kiribati Government awarded a JV by Egis Avia and Egis Airport Operation the contract to manage and operate Tarawa Bonriki Airport for 24 months.

Caisse des Dépôts has its eye on Groupe ADP

Caisse des Dépôts et Consignations (to give it its full name and not to be confused with the Canadian pension fund Caisse de dépôt et placement du Québec) is a French financial organisation created in 1816, and part of the government institutions under the control of the French parliament. It is a long term investor serving general interest and the economic development of the country and is the ‘parent’ of Egis Projects.

CDC is only involved in the management of Lyon’s St Exupéry Airport (with VINCI) and Pau Pyrenees Airport (via Egis), but it has expressed an interest in acquiring a stake in Groupe ADP if France's Government opts to divest its stake in the company (that process is on hold). CDC has previously bid for the concessions of Nice Airport and Toulouse Blagnac Airport, unsuccessfully.

CDC is also involved in the financing of the first phase of the Paris CDG Airport's ‘CDG Express’ project, with a commitment of EUR400 million.

Egis has stated that it will rely on its international, national and local expertise to carry out this Tahiti project and it certainly has plenty of that.

But most of it came before the pandemic, which has added another obstacle to the successful and profitable operation of an airport that is isolated in the Pacific Ocean, and requiring a major deployment of any airline’s resources to service fully.

Since this report was written the concession for Tahiti-Faa’a international airport that was awarded to the Egis group was cancelled by the country’s administrative court.

A group formed around the Chamber of Commerce, Industry, Services and Trades (CCISM), a previously unsuccessful candidate, remains in the race to contest the concession having previously lost out, having come third in the original tender.

The CCISM group is also believed to include the French/Luxembourg fund Meridiam and Marseille Provence Airport as a temporary grouping of companies called Groupement TI'A.

The CCISM had asked the pre-contractual summary judge to annul the decision awarding this concession and the one rejecting the offer presented by the TI’A group, and the judge concurred.

The rules of the consultation required the candidates to indicate the identity of the co-contracting parties to whom they intended to entrust the execution of services, including the design-realisation of the renovation of the terminal, and that this rule was disregarded by the candidate declared beneficiary.

The decision to call for new tenders rests with the state and the Directorate General of Civil Aviation.