Angola has spent hundreds of millions of dollars in recent years renovating, upgrading and building new airports throughout the country which were damaged during the nation’s destructive 27 year civil war following independence from Portugal in 1975.

The investment is beginning to pay dividends with flag carrier TAAG Angola Airlines increasing capacity by nearly 40% in the past year. But competitor Fly540 Angola is struggling to make headway in a market beset by bureaucratic red tape and corruption.

And despite Angola being one of the world’s strongest performing economies, owing to its vast oil reserves and diamond mining industry, the benefits of the nation’s wealth are yet to flow through to the general population.

Angola refurbishes and upgrades about a dozen airports in 2012

Soyo’s runway was also extended by 100m to 2090m. Catumbela Airport opened in Aug-2012 with a capacity of 2.2 million passengers per year, as did Gove Airport.

The USD60 million conversion of Cuito Cuanavale Airport from a military airfield was completed in Jun-2012 after about four years of construction. And in the capital, Luanda International Airport opened a new USD31.5 million domestic terminal in Sep-2012 with a capacity of 2 million passengers per year. 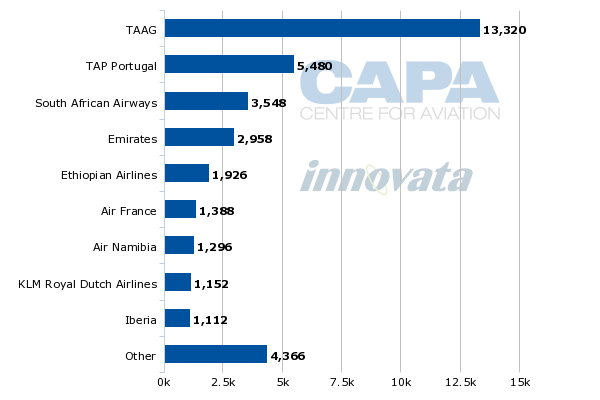 The government has stated the investment in the country’s airports will be on-going. The first phase of Namibe Yuri Gagarin Airport is due for completion Aug-2013, including taxiways and passenger handling areas. Cabinda Airport will also under go redevelopment in 2014 and 2015 to improve capacity and supporting infrastructure. Cabinda is the capital of Cabinda Province which is an exclave to the north of the country surrounded by the Democratic Republic of Congo. Cabinda is a large oil and hardwoods producer.

The isolated Kuando-Kubango province will be opened up with the construction of five airports capable of handling medium sized aircraft over an unspecified period. The province in the southeastern corner of the country, also known as “The Land at the End of the World” is Angola’s second largest, but least densely populated.

Its location bordering Zambia and Namibia makes the province Angola’s main gateway into the rest of southern Africa, offering the potential for the region to become a cross border trading hub and tourism destination as home to one of Africa’s great elephant reserves.

Angola also reportedly plans to build an airport 35km southeast of M'banza-Kongo in the north of the country near the border with the Democratic Republic of the Congo.

All this development should point the way to a period of expansion for airline services in Angola. Angola’s minister of transport Augusto da Silva Tomas stated in Jun-2013 that the government plans to expand TAAG’s domestic network to cover all of the country’s provinces, in addition to increasing the number of regional and intercontinental destinations. 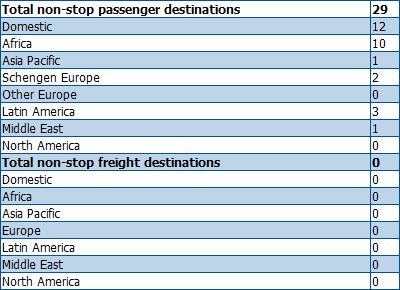 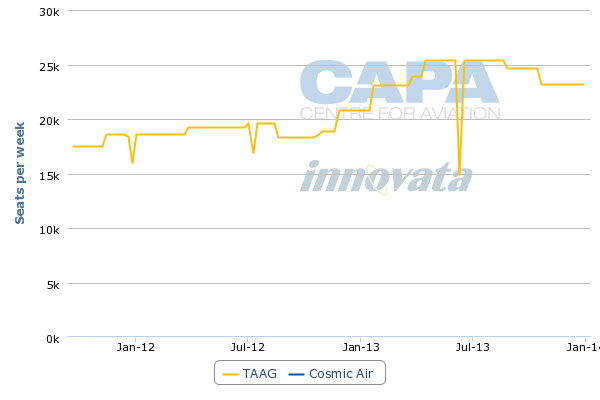 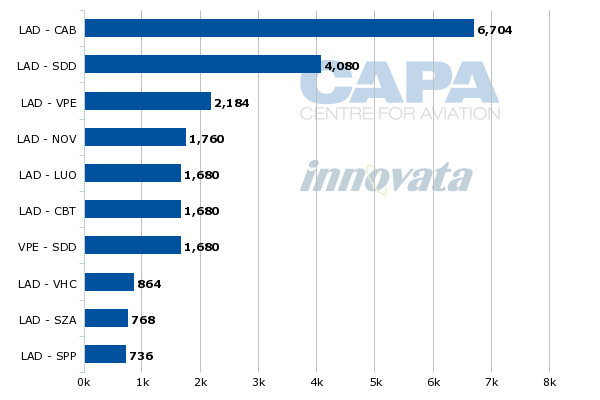 TAAG has a monopoly on most of its domestic network and faces only limited competition on other routes.

Fly540 Angola has been beset with bureaucratic hurdles since it launched in the country in Jan-2011. But fastjet, which eventually aims to confer its brand and business model on the carrier, is confident that the operation can be profitable and sustainable after passenger numbers increased by 63% in the first five months of 2013.

The Angola Government has selected at least four private airlines to commence domestic services after a bidding process in early 2012, but the successful carriers, reportedly Air Two, Trans-World, Amin Aviation and SJL, have yet to emerge from the lengthy certification process.

Angola's fast growing economy is based on oil and diamond exports

Angola’s economy is one of the fastest growing economies in the world, averaging 11% GDP growth between 2001 and 2010 driven by oil production and diamond mining. The oil industry, largely built with United States investment, contributes about 85% of Angola’s estimated USD130 billion GDP in 2012, with the country’s other major commodity, diamonds, contributing another 5%.

Angola was hit hard by the Global Financial Crisis (GFC) that started in 2008 which slowed economic growth from double digit to 2.5% in 2009 as oil and diamond prices fell. Many construction projects were halted as government income fell and debt to foreign construction companies ballooned.

A recovery in oil prices saw Angola turn a budget deficit of 8.6% of GDP in 2009 into a surplus of 12% of GDP in 2012. But GDP growth has not returned to pre-GFC levels and is forecast by the International Monetary Fund to stabilise at a little above 5% for the next five years. 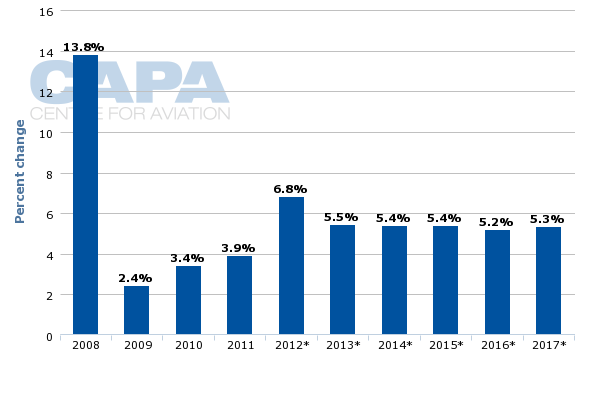 But despite its extensive oil and gas reserves and rich agricultural lands, widespread corruption means the benefits of the nation’s wealth are not flowing through to the majority of the population and Angola remains a poor country with about a third of its estimated 18.6 million population reliant on subsistence agriculture.

China is Angola's biggest trading partner, taking about 46% of the country’s exports, including about 40% of the country’s crude oil exports and accounting for about 21% of imports. Other major export partners include the United States, 13.7%, India 11%, and South Africa 4.1%, according to the CIA World Handbook. The booming relationship with China began in 2004 when it became the first nation to provide funding for public investment projects in Angola, initially in the form of oil-backed loans.

The relationship was reaffirmed in Jan-2011 when China stated it would help Angola, by now its largest African trading partner, diversify its exports away from being focused on crude oil.

See related report: TAAG to take B777-300ERs to the world

TAAG offers a twice-weekly 777-200ER direct flight between Luanda and Beijing to cater for the growing number of Chinese investors ranging from large corporates to SME entrepreneurs seeking opportunities in Angola.

But TAAG has struggled to grow capacity on the route. The carrier competes against services from foreign carriers that operate Luanda-Beijing via their own hubs, including Ethiopian via Addis Ababa and Emirates via Dubai.

TAAG operates daily from Luanda to Brazil with four flights to Sao Paul and three to Rio de Janeiro, making it the carrier's biggest market, accounting for 23% of capacity by seats. 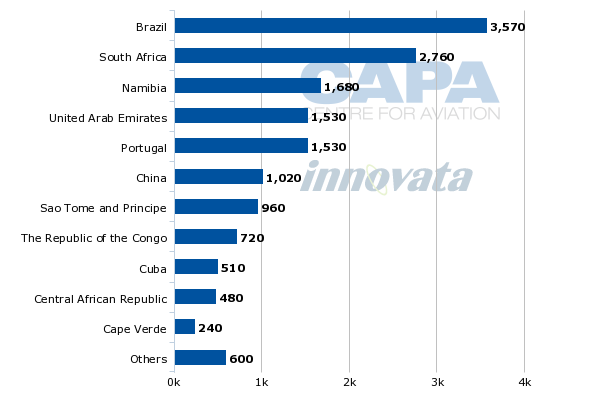 But the carrier does not maximise its ability to link South America with Beijing via Luanda with none of the flights offering same-day connections in either direction.

Several African and Brazilian airlines have either launched or are exploring the potential to leverage African routings to China to link the world’s three biggest growth markets.

Kenya Airways has identified Luanda as a possible transit point to operate its own South America-Africa-China route via Nairobi after Kenya and Angola signed a bilateral air services agreement in 2011. The agreement also allowed Kenya Airways to add a third frequency to Luanda.

But despite claiming that the lack of a bilateral partnership between Kenya and Angola had “greatly hampered” Kenya Airways’ efforts to develop in central and southern Africa, the carrier is yet to add any more capacity since the agreement was concluded.

Former colonial master, Portugal accounts for about 20% of Angola’s imports, mainly machinery and industrial equipment as well as food, beverages and metals. Angola, in turn has become Portugal’s largest export market outside Europe.

In a stunning reversal of colonial migration, Portuguese graduates unable to find work in their economically depressed home land are heading for Angola in droves to work for an increasing number of Portuguese companies that have moved their operations to the country attracted by investment-friendly plans including the opening of a stock exchange. In 2012 between 25,000 and 30,000 Portuguese left for Angola, compared to just 156 in 2006.

TAP Portugal has reported strong demand from the corporate sector on its African routes to Luanda and Maputo in Mozambique. TAP Portugal stated in Apr-2013 that both markets have “immense potential” with demand growth on the Luanda route of 12% in the 1Q2013, as well as 15% growth in corporate traffic. Luanda accounts for 20% of the airline’s revenue, despite the route not appearing in its top 10 international destinations by capacity.

This high demand and restricted capacity allows TAP to charge a minimum of USD1,524 for a one way “classic” fare between Lisbon and Luanda year round, according to its online booking engine. TAAG’s fares start at an even higher USD1,643 for the flight of 7h30m.

TAP currently operates 10 services per week during the peak Jun-Oct-2013 high season from its Lisbon base to Luanda using A340-300 equipment. But this will reduce to a daily service from 30-Sep-2013 against TAAG’s 11 services per week operated with a mix of 777-200ER and 777-300 aircraft, including one via Porto. TAP claims that Angola’s refusal to expand traffic rights has created a bottleneck.

TAAG has another three 777-300ERs on order for delivery between 2014 and 2016 as part of its medium to long term growth strategy that includes adding more points in Europe with its own metal that are currently served through code shares, as well as gaining permission to operate to the United States. The new aircraft will replace the existing 777-200ERs.

Angola’s concerted investment in its airport infrastructure will eventually allow aviation to play a greater role in the economic development of the country and the much needed diversification away from the oil industry. Tourism is an area of focus, with the government expecting to attract 4.6 million visitors per year by 2020, generating USD4.7 billion in revenue and creating one million direct jobs.

Already TAAG is responding to the investment by growing its domestic capacity as competitors begin to make headway and start-ups go through the laborious process of gaining their air operators certificates.