Sydney Airport’s redevelopment plans remain largely unchanged in its revised draft master plan issued on 05-Aug-2012 looking out to 2033. By then total passenger numbers are forecast to have doubled to more than 74 million per year. The airport has also retained plans to establish two separate international and domestic terminal precincts located on opposite sides of the main runway by 2019.

The existing T2 and T3 domestic terminals on the eastern side of the airport will be redeveloped and expanded to also cater for international services including the addition of more A380-capable gates. The T1 international terminal on the western side of the main runway will also be extended to create about four more gates. Both precincts will be equipped with swing gates able to serve domestic and international traffic from the same gate at different times.

The dual terminal concept is designed to spread the daily traffic peaks across to facilities while also allowing passengers to more easily transfer between international and domestic services on allied airlines without the need to change terminals.

In addition roads serving the airport will be reconfigured with a new ring road serving the eastern precinct and a new thoroughfare to T1 to ease heavy congestion.

Master plan is designed to cater for 74.3 million passengers a year by 2033

The airport says the draft master plan will allow it to meet the forecast 74.3 million passengers that will use the facility per year by 2033 without any changes to the existing regulatory environment, including no change to curfews or the aircraft movement cap, no changes to the noise sharing arrangements, access for regional airlines or flight paths and there would be no new runway.

The passenger forecasts have reduced to reflect the effects of the global financial crisis. Passenger numbers in 2029 are now projected to be 67 million, about 15% below the 78.9 million forecast in the 2009 master plan. Correspondingly the number of passenger aircraft movements has also been revised down from 402,000 in 2029 to 379,600, 6% below the previous plan. Traffic forecasts in 2033 remain about 5% below the traffic forecast for 2029 in the 2009 master plan.

Dual use terminals will spread the load across Sydney Airport's infrastructure

The dual use terminal concept will allow a greater and more even spread of use across all areas of the airport, including the terminals, aprons, taxiways and access roads. There is currently no overlap between the three busiest international hours (06:00, 09:00 and 10:00) and the four busiest domestic hours (07:00, 08:00, 17:00 and 18:00), according to the airport.

Grouping airlines allied to the two Australian international carriers, Qantas and Virgin Australia, in the same terminal will also significantly reduce the number of passengers transferring between terminals for connecting flights.

However, earlier plans to group carriers according to marketing alliances have been abandoned, in part because Virgin Australia has strongly indicated it will not move its entire operation to T1 as previously suggested by the airport. But also further research by Sydney Airport indicates that connecting traffic between airlines that are not necessarily allied could play a greater part in which terminal a carrier will prefer to be based. 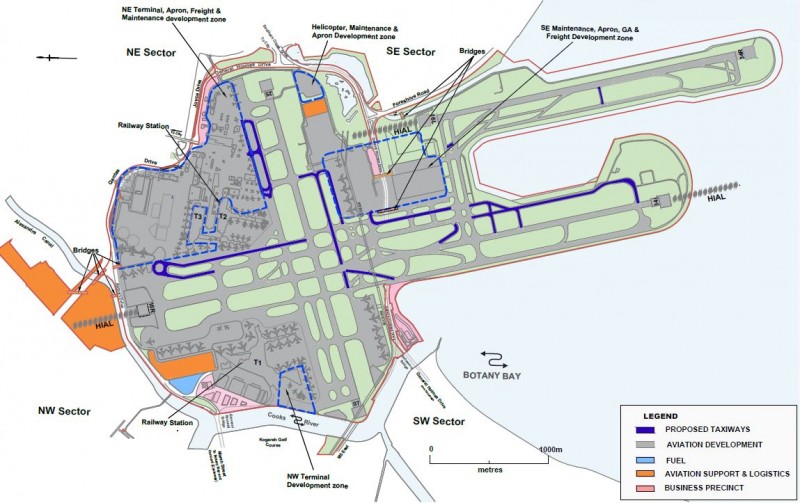 Construction of the development will be phased in accordance with demand and will start after the master plan is approved by the government and building consents have been granted.

Sydney has not yet put a cost on the project, but in 2011 said it would be in line with previous projections of other terminal works, which it estimated at AUD2.5 billion (USD2.4 billion) from 2010-2029. Sydney is majority owned by MAp (formerly Macquarie Airports) while Melbourne Tullamarine is owned by Asia Pacific Airports Corporation.

Qantas is likely to relocate all operations to the eastern precinct

The bigger eastern precinct is currently the only realistic option for Qantas and its partner Emirates along with other oneworld carriers. That would leave Virgin Australia and its alliance partners, Singapore Airlines, Etihad, Air NZ and Tiger Australia to take up residence in T1.

Qantas says it sees benefits for it and its partners to operate all domestic and international flights from T2 and T3.

Virgin Australia, however, is resisting, saying that moving to T1 would place it at a significant competitive disadvantage to Qantas to attract connecting passengers arriving or departing at the rival terminal.

The Qantas and Virgin Australia groupings account for about 81% on all movement at Sydney. Of the remaining movements, the majority are from regional carriers Regional Express (Rex) and Aeropelican.

Sydney Airport says no decisions have been made on how the terminals will be allocated and points out that other permutations are also possible, including Qantas and Virgin Australia both being housed in the eastern terminal precinct with a small number of partners while LCC subsidiaries Jetstar and Tiger Australia are based in T1 along with a mix of foreign carriers.

The airport argues that even before Qantas formed its alliance with Emirates and Virgin Australia’s alliances with SIA and Etihad, there were large transfer flows between some Star Alliance carriers and Qantas, as well as from oneworld airlines to Virgin Australia. However, the significantly stronger bonds of the new alliances, which include revenue sharing and in the case of Virgin Australia, equity investments by its partners, are likely to curtail such cross over flows in the future. 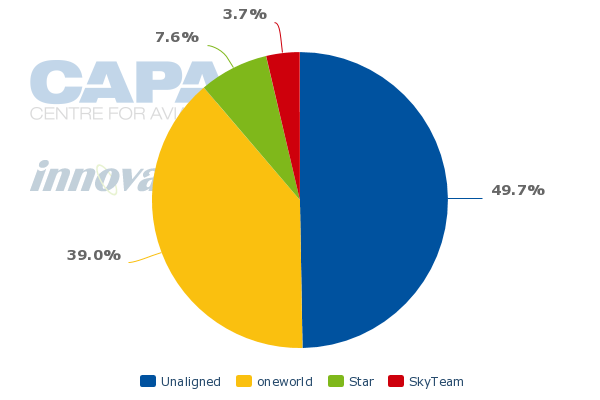 Transfer passengers account for about 20% of Sydney Airport’s traffic and their number is forecast to reach six million by 2033 divided equally between arrivals and departures. That number will be reduced to about two million under the dual terminal development.

Co-locating the domestic and international flights also reduces the cumbersome terminal transfer many passengers currently have to go through. But it does reduce the ease and convenience for passengers to choose a connecting service they may prefer.

If Qantas does ultimately consolidate all its services to the eastern precinct it opens the opportunity for Sydney Airport to take over the carrier's dedicated airside terminal transit shuttle bus service as a common use service. This is currently the most efficient shuttle service available. Non-Qantas travellers are limited to a more time consuming landside bus or train service.

Basing all operations at a single terminal could also allow Qantas and Virgin Australia to make more efficient use of their widebody fleets by being able to deploy them on international services outside of the daily domestic morning and evening peaks.

Virgin Australia and Qantas are both in the process of reconfiguring their domestic A330 fleets with international standard cabins, including lie-flat business class seats. While this is aimed at increasing their market share on trans-Australia routes to Perth, it does open the possibility of rotating the aircraft on international services at times when there is insufficient domestic demand for widebody aircraft.

Currently redeploying the A330 between domestic and international operations in Sydney requires them to be towed between terminals across a live runway, which can lead to lengthy delays.

Such flights, however, are likely to be a minority of traffic. Qantas tends to segregate its fleet by product type and it is rare for aircraft to regularly cross between domestic and international operations. While Qantas has an extensive B737 fleet for its domestic and trans-Tasman operations, its trans-Tasman services are operated by a dedicated fleet of New Zealand-based B737s. In the long term Qantas expects its domestic fleet to be flown by B737s and A330s while its international fleet is flown by A380s and B787s, reducing potential overlap between domestic and international operations.

Virgin Australia is harmonising the product on its A330 fleet so the aircraft can be interchanged between domestic trunk routes and international flights, but the number of such A330 transfers at Sydney would be small.

Sydney airport will have to negotiate an early end to Qantas’ leases on the airline’s T3 terminal and its jet base which are not due to expire until 2019 and 2020 respectively. The existing jet base footprint is required for the planned T3 expansion.

This does not look to be a significant hurdle given the efficiency benefits Qantas stands to gain from the proposed redevelopment.

The expiry of the Qantas building leases which occupy large areas of land, provided Sydney Airport with the opportunity to take a holistic view of how the airport could be redeveloped to maximise the use of the space constraint site. That in turn led to the integrated terminal concept.

A new engineering complex will be constructed on the eastern side south of the cross runway for both Qantas and Virgin Australia.

Sydney Airport says the new concept addresses many of the requirements identified by the 2012 Australian and New South Wales governments’ joint study on aviation capacity in the Sydney region.

That study found that Sydney Airport would run out of capacity by 2035 even allowing for the dual precinct plan and taxiway developments as well as an increase in the hourly movement cap from 80 to 85 at peak times. An additional airport would be needed to supplement capacity of Sydney Airport by 2030 and work should commence immediately to bring a second airport online the study found.

Sydney Airport however aims to demonstrate through its latest five-yearly master plan review that it is able to cope with the huge increase in demand until 2045 before a second airport will be required to be built in the Sydney basin.

The joint study, however, found that the integrated terminals may offer improved efficiency, but do not provide long term solutions for capacity. The physical capacity of the runway system and airspace could support an increase in the movement cap from 80 to 85 movements per hour, provided adequate gate and taxiway capacity is available. While this could allow the airport to cope with growth for an extra few years, the study found this would not address the underlying constraints on long term capacity.

The difference in outlook between the airport and the joint study is largely in their respective forecasts of how much of domestic flying will be transferred to widebody jets like the A330 between the main centres, including Sydney, Melbourne, Brisbane, Gold Coast, Cairns and Canberra over the next 20 years.

The airport can point to history to support its case. Advances in aircraft technology have had a profound effect on the way Sydney Airport’s capacity is used. Between 2000 and 2011 passenger numbers increased 41% while aircraft movements increased just 1%. The airport expects the trend to larger aircraft to continue to increase, albeit at a slower rate than has been case historically.

Nevertheless, the debate over the need for a second airport has dragged on for more than 30 years and as Sydney expands westward, the catchment for an airport at Badgerys Creek – the most logical and economically beneficial site – becomes increasingly compelling.

The master plan is now open for public submissions which must be made by 30-Aug-2013. The plan will then be redrafted and submitted to the federal government for approval.

CAPA will host its Asia Pacific Aviation Summit in Sydney on 7-9 August. The final session of this event is a major debate among key interested parties, entitled "The GREAT DEBATE - Sydney's second airport (or not)?" For details and to register please go to the Events drop down menu on this site.