An unsolicited non-binding bid for Sydney’s Kingsford Smith Airport back at the beginning of Jul-2021 has eventually – after two offer revisions and scrutiny by the airport’s boards – become a binding one, valuing the airport at USD1 billion more than the original.

Australia’s aviation sector is just starting to see the tide turning in its favour but there is a long way to go until normality is restored, and the responsibility for getting the airport back on track within whatever constraints that continue to exist will fall on the new owners, which are, at least, very experienced in operating them.

There is still the regulatory approval to gain, but that should be achievable. The new airport in the west of Sydney, due to open in five years' time, should be taken into everyone’s calculations, but public commentary on it is lacking.

One thing this transaction might do is to kick-start dormant transactions elsewhere in the world, or even prompt new ones. There are as yet precious few of them.

Sydney Airport sale all but agreed at AUD8.75 per stapled security (share)

Elon Musk might need help from Twitter to decide whether or not he should sell shares in Tesla, but at the end of the day Sydney Airport’s board did not need much encouragement to recommend the conclusion of a sale of the airport to a consortium led by the Australian firm IFM Investors.

Following an initial approach on Friday, 02-Jul-2021, and subsequent second offer and re-evaluation of a non-binding indicative proposal to acquire all of the stapled securities in Sydney Airport Limited and Sydney Airport Trust 1, on 08-Nov-2021 the publicly floated Sydney Kingsford Smith Airport entered into a Scheme Implementation Deed (SID) with Sydney Aviation Alliance Pty Limited (SAA).

UniSuper’s existing interest transferred into equivalent interest in the consortium

The airport's board has unanimously recommended that shareholders vote in favour of accepting the offer at meetings likely to be held early in 2022.

The proposal had been conditional on Sydney Airport's largest security holder (i.e. shareholder in other jurisdictions), UniSuper, agreeing to reinvest its holding into an equivalent unlisted and illiquid interest in the privatised Sydney Airport.

The rationale was that this “would serve to maximise the participation of Australian superannuation funds in the ongoing ownership of Sydney Airport.” There has been a strongly stated desire from the start that the organisation carrying the airport forward should be fundamentally Australian in nature.

GIM is an arm of Global Infrastructure Partners (GIP), the US/UK funds manager that was once a major player in the airport sector but has been selling off assets in London during the past few years.

The Scheme Consideration values Sydney Airport's equity at approximately AUD23.6 billion (USD17.5 billion) and represents an uplift in equity value (i.e. it revalues it) of approximately AUD1.3 billion (USD961.6 million) to the price of AUD8.25 (USD6.1) initially offered by the consortium in Jul-2021, and a AUD7.9 billion (USD5.8 billion) uplift to the closing price on the business day before Sydney Airport's announcement of the receipt of the Indicative Proposal.

The announcement was greeted by a hike of almost three percent in the value of Sydney Airport’s shares on the Australian Stock Exchange, to AUD8.46, although it stayed there, and that figure still falls short of the valuation and is more in line with the original one.

The all-time record high share price for the airport of AUD8.97 was recorded on 26-Dec-2019, just in advance of the coronavirus pandemic.

The lowest ever recorded (AUD5.48) also came during the past year. 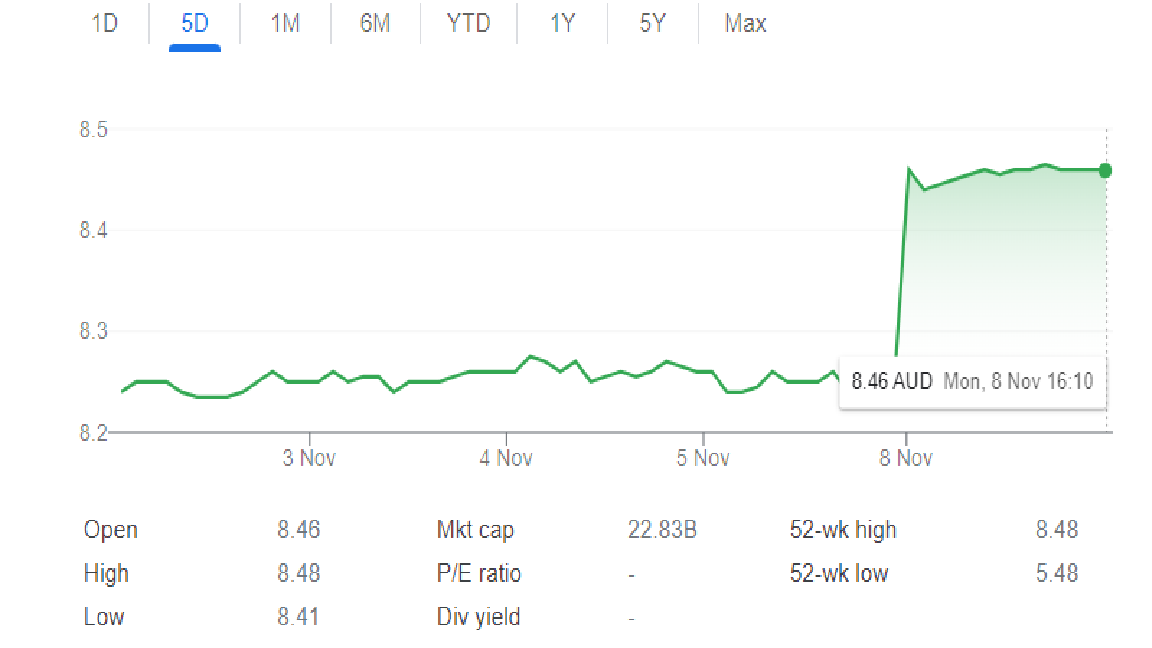 But the fact that the share price did not immediately rise more substantially on this latest news is perhaps indicative of the tensions that still exist in Australia. A country where, even though the international border has reopened and Qantas has resumed international services, and while domestic borders may reopen before the end of 2021, ‘back to normality’ in the air transport sector remains a dream in some states.

Lockdowns in Australia can be reimposed on account of a single person being infected, and some important travel markets in Asia Pacific will likely remain severely constrained for some time to come. That does not engender confidence in airlines.

Those markets include China, a country with which Australia's political relations are tense, and one that is succumbing again to the virus; this time the ‘Delta variant’, with the likelihood that travel may be restricted for a further year.

Seat capacity stuck in a rut

As the chart below shows, Sydney has one of the worst seat capacity charts compared to 2019 to be found anywhere, and it applies equally to both domestic and international capacity.

Since the middle of Jul-2021 capacity on a weekly basis at Sydney Airport has been running as low as it was in 2020 – or even below that level.

There has been a slight upward variation since the beginning of November, and the projection is for a continuation of that trend into the emerging summer period. But there have been false dawns before, and concerns about the next winter period will not go away quickly. 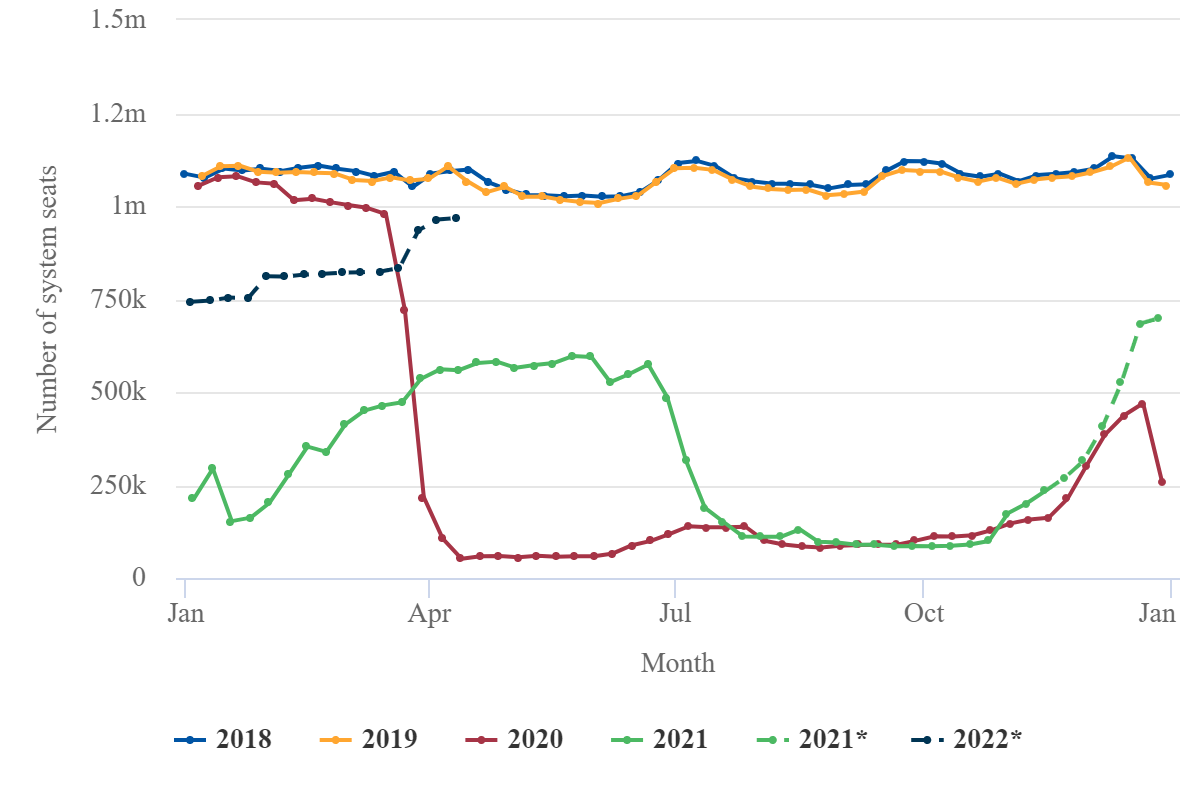 The bid still requires regulatory approval and that revolves around the degree of influence that consortium members wield over other Australian airports, where ownership is becoming compacted.

The ACCC must weigh up whether both airlines and consumers could be disadvantaged by the consortium acquiring the airport in full.

IFM already owns 25% of Melbourne’s Tullamarine Airport, 20% of Brisbane Airport, 13% of Adelaide Airport and 77% of Darwin Airport – eight airports in all in Australia – as well as stakes in others in Europe and Latin America.

QIC is now the third largest institutional investment manager in Australia and controls 25% of that airport.

The Australian Competition and Consumer Commission (ACCC) will have concerns over this. Airlines have themselves raised concerns about common airport ownership in a country where there is already an ownership concentration, together with one of the most ‘light-handed’ regulatory approaches to be found anywhere; meaning that airports are not constrained in the charges they can levy on airlines to use their facilities, as they are in Europe for example.

For example, that laxity of regulation helped the Sydney Airport Group to achieve an EBITDA of USD394 million in the financial year ended 31-Dec-2020, which was a 62% reduction on the previous year but still generated an EBITDA margin (roughly an operating profits-to-revenue calculation) of 63% – well in excess of what was achieved in other regions.

However, the CAPA view on the potential intervention of the ACCC is that it is unlikely to have much of an impact, and the ACCC may even take a relaxed view about what are in most cases only minority ownerships of other Australian airports. Ditto the Foreign Investment Review Board as most of the investment will probably emanate from the Australian partners.

As for due diligence, the consortium has been undertaking due diligence on the airport since mid-Sep-2021, to enable it to put forward a binding proposal.

Surprisingly, no counter bids have emerged, including from Australia’s Macquarie Group (although it was reported at least to have “explored” one), or the usually aggressive Canadian pension funds, although the due diligence granted to the consortium is on a non-exclusive basis, meaning another suitor could still come to the table even at this late stage.

In the long term, Macquarie might be more interested in the new airport being built to the west of Sydney (see below).

The outcome “reflects appropriate long-term value for the airport”.

That appears to make the case quite clearly.

A Sydney Airport Alliance spokesperson said the finalisation of the deed was the culmination of months of engagement between all parties, a "significant step forward", and that the consortium looked forward to security holders voting on the proposed deal. It pointed to the alliance "representing many millions of Australians”, and that it “intends to work hard to bring more flights and passengers back to the airport as the aviation industry emerges from COVID-19."

Western Sydney Airport completion still five years off, but it hangs over this transaction all the same

As mentioned in previous CAPA reports, the Western Sydney area will have a new second airport at Badgerys Creek, and that is due to open in 2026.

Four years ago Sydney Airport, having been given first option to do so, declined to invest in and build the new facility, which is about 50 kilometres (30 miles) west of the Sydney CBD, citing "risks" on monetary returns for their investors as its main reason behind its decision.

It is not yet known how Sydney Aviation Alliance regards the new airport; as a competitor, an irritant, or something potentially to be invested in further down the line. Because although the government is building it, it will not want to manage it, and it has not ruled out future whole or partial private ownership.

The same private consortium owning both Sydney airports would set alarm bells ringing at the ACCC, but having two separate ones owned by competing consortiums, while it might be good for the consumer (or not, as the case may be), would test the mettle of both the operators.

Previous CAPA reports on this matter: