In 2016 SWISS has rapidly added capacity to Southeast Asia and some of its other long haul markets as it has replaced A340-300s with 777-300ERs. The new 777s have 55% more seats than the A340s, pressuring yields as SWISS pursues more sixth freedom traffic in a highly competitive marketplace.

SWISS has taken delivery of six 777-300ERs in 2016, enabling it to increase capacity on four of its long haul routes – Bangkok, Hong Kong, Los Angeles and Singapore. It has three more 777-300ERs on order, which will be delivered in 2017 and drive further capacity increases in Singapore and San Francisco.

SWISS is now assessing whether it should acquire another six 777s to replace its last six A340s, with a decision expected by the end of 2016. Six additional 777s would result in another round of significant capacity increases, impacting Beijing, Johannesburg, Sao Paulo, Shanghai and Tokyo.

In recent years SWISS has maintained a widebody fleet of 29 aircraft (15 A340s and 14 A330s) and a long haul network of 18 destinations. It currently serves eight destinations in Asia, eight in North America, one in Latin America and one in Southern Africa.

It has since taken another five 777-300ERs, enabling it to upgauge four of its long haul routes – Zurich to Bangkok, Hong Kong, Los Angeles and Singapore. SWISS does not intend to pursue any expansion of its long haul network, but its strategy is purely to use the new 777-300ER fleet to increase capacity in existing markets.

In Aug-2016 SWISS recorded a 12.4% increase in ASKs. This represents the first month of double-digit ASK increases in more than five years. 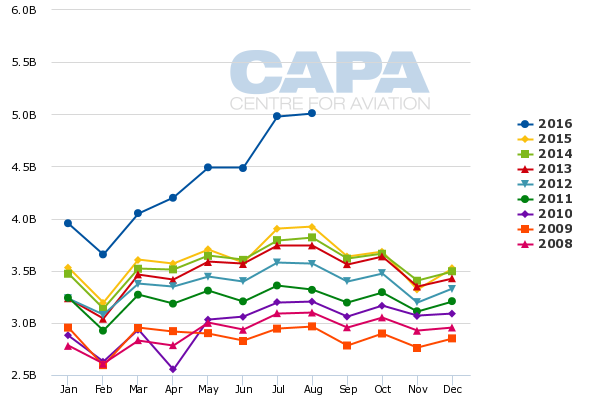 Each month in 2016 the level of ASK growth has increased as more 777-300ERs have been delivered and more flights have been upgauged. In Jan-2016 – the last full month without any 777s in the fleet – SWISS had a 1.1% ASK increase, equalling the full-year increase from 2015. 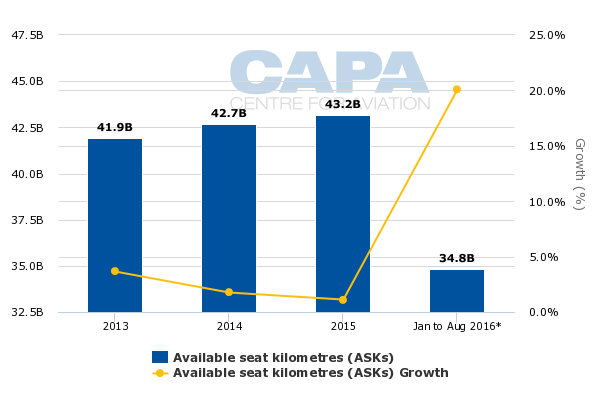 SWISS’ sixth 777-300ER was deployed on the Zurich-Singapore route on 3-Sep-2016. Swiss has only partially upgauged Singapore and will continue to operate four weekly A340-300 flights until Mar-2017, when it takes its seventh 777-300ER and starts operating all seven weekly Singapore frequencies with the 777.

SWISS is now taking a brief hiatus from 777 deliveries after taking six aircraft in a span of less than six months. The last three 777-300ERs that it has on firm order are slated to be delivered in a staggered schedule throughout 2017.

In addition to upgauging the remaining Singapore flights, SWISS plans to deploy the 777-300ERs slated for 2017 on the Zurich-San Francisco route. Beside Los Angeles, San Francisco is Swiss’ only North American destination on the west coast. Its other five North American destinations (Boston, Chicago, Miami, Montreal, Newark and New York JFK) are all on the east coast and are within range of its A330-300 fleet. (Swiss is currently operating some Montreal flights with the 777-300ER and will operate some Miami flights with the 777-000ER for the northern winter season beginning at the end of Oct-2016, at which point all the Montreal flights will revert to the A340-300.)

Following the San Francisco upgrade SWISS will have increased seat capacity by 55% in the US west coast market, as well as to Southeast Asia and Hong Kong. The transition from the A340-300 to 777-300ER also generates approximately a 60% increase in cargo capacity, according to SWISS.

Not surprisingly profitability has been on the decline, with SWISS’ operating profit (EBIT) lower by 31% in 1H2016, to EUR31 million. As CAPA has previously observed, in 2016 SWISS has lost the distinction of being the most profitable airline in the Lufthansa Group. From 2009 to 2015 SWISS accounted for 47% of the operating profits produced by all the airlines in the Lufthansa Passenger Airline Group.

SWISS has also been impacted by foreign currency declines and increasing competition. Nevertheless, the capacity increase generated by the 777-300ER has been a contributor to the recent negative trends.

Capacity increases have come at a challenging time

The capacity increase has come at a time when yields overall have been under pressure, including in the markets where SWISS has deployed the 777. In the Southeast Asia-Europe market yields have particularly been impacted by aggressive competition from the Gulf airlines.

With the 10 weekly 777-300ER flights, SWISS has increased capacity to Southeast Asia by 39%. Once the four additional Singapore flights are upgauged in Mar-2016, the increase will be 55%.

The capacity increases in Southeast Asia – and elsewhere – have forced SWISS to rely more on sixth freedom traffic, which typically comes with a yield penalty compared with local Singapore/Thailand-Switzerland traffic.

SWISS to increase regional capacity as CSeries aircraft are delivered

SWISS has started competing in the Bangkok/Singapore-US market and is now heavily promoting connections to European destinations beyond Zurich.

SWISS is planning to add capacity in several European markets over the next two years as it takes delivery of new Bombardier CSeries aircraft, which are operated by the Swiss Global Air Lines subsidiary. The higher capacity on feeder routes is intended to help support the higher capacity on long haul routes.

At the same time the SWISS A320 and A321 fleet will be renewed with A320neos and A321neos over the next few years. But in this case capacity will remain relatively flat (with a small two seat increase on the A321). 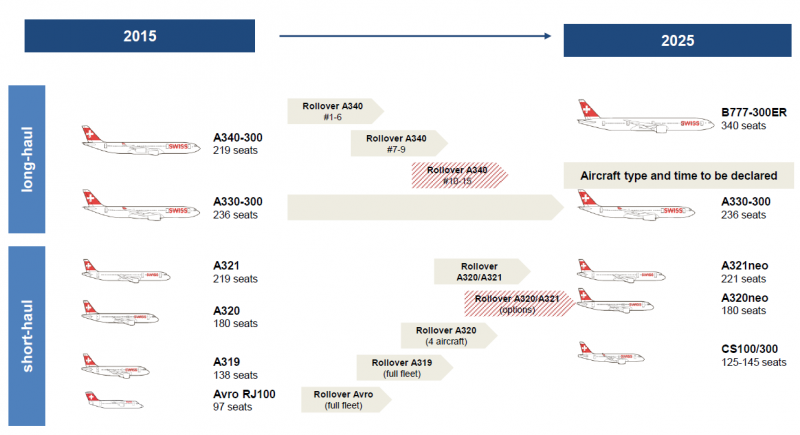 SWISS to rely more heavily on connections beyond Singapore and Zurich

SWISS is no stranger to the sixth freedom market as system-wide transit traffic already accounted for approximately 60% of total SWISS traffic. However the local/transit mix varies by market and SWISS generally has a much stronger local traffic portion in the premium cabin.

Obviously in those markets (both short haul and long haul) with large capacity increases the local/transit mix will change, resulting in increases to the total sixth freedom figures.

SWISS believes it will be able to increase local traffic – including in the long haul markets where it has added capacity. Switzerland is becoming an increasingly popular tourist destination for Asians. In the outbound market from Switzerland SWISS expects an increase in traffic to offline destinations in Southeast Asia and the South Pacific, as a new joint venture is implemented with Singapore Airlines.

As CAPA has previously highlighted, the Lufthansa Group-SIA JV is expected to be implemented in early 2017 covering Australia, Malaysia and Indonesia, as well as Singapore and the four home markets of the Lufthansa Group (Austria, Belgium, Germany and Switzerland). Already – in Apr-2016 – SWISS has begun new codeshares with SIA from Singapore to Kuala Lumpur, Jakarta, and seven destinations in Australia/New Zealand. 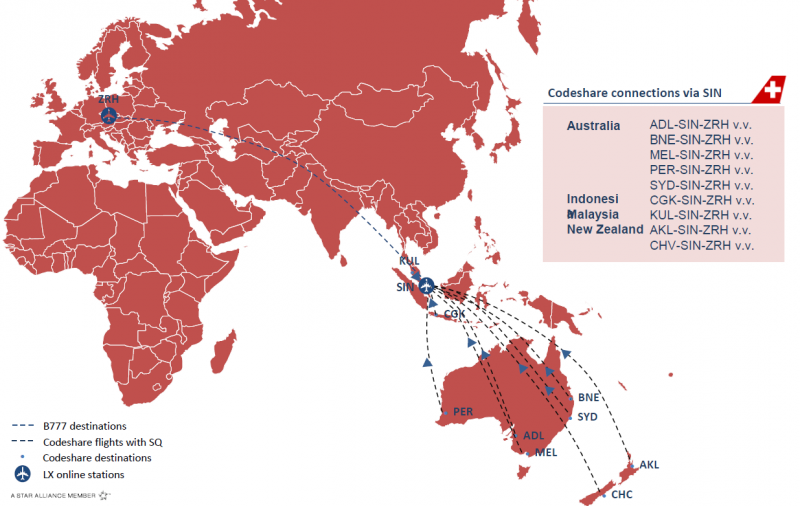 The new codeshares enable SWISS to increase its share in the Australia/New Zealand-Switzerland and Southeast Asia-Switzerland market. However, these increases will not be able to support all of the 55% capacity increase on the Singapore-Zurich route. SWISS will also need to rely more on connections beyond Zurich.

As SWISS starts to experience the impact from the additional capacity created by addition of the initial six 777-300ERs it faces a tough decision on its remaining A340s. SWISS is now looking at two options: expand the 777-300ER fleet to 15 aircraft and phase out the A340-300s entirely – or keep five A340-300s. With the latter option it will still acquire one additional 777-300ER as SWISS does not want to stop at nine 777s, an odd figure making aircraft rotations more difficult.

“The question is do we have enough investment from the Lufthansa Group to do a full rollover to the 15 or do we leave it at 10 and keep five A340s”, SWISS CCO Markus Binkert told CAPA at a recent event in Singapore. “That is a decision that will be taken by the end of the year.”

Mr Binkert added that if SWISS keeps the five A340s it will retrofit the aircraft to give SWISS a standard long haul product.

Replacing all the A340s with 777-300ERs initially seemed like a foregone conclusion. However, given the current market conditions and the lower fuel prices the acquisition of six more 777s is less obvious.

Ultimately SWISS needs to decide whether its last remaining A340 routes – Beijing, Johannesburg, São Paulo, Shanghai and Tokyo – can support a 55% increase in capacity. These are all highly competitive markets; but so were the routes that have already been upgauged.

Given the growth in China, including outbound to Switzerland, Beijing and Shanghai should be able to support more capacity. Higher-gauge aircraft would also enable SWISS to maximise precious slots at these two key Chinese destinations.

However, if it downgauges some of the routes that now use 777s SWISS also has the option of upgauging Beijing and/or Shanghai in future, while maintaining five A340s. In fact keeping both the A340 and 777 in its fleet gives SWISS more flexibility, since it can respond to fluctuations in demand (seasonal or permanent) across the nine routes that require longer-range aircraft.

SWISS’ other eight long haul destinations do not require the A340 or 777 and are currently served with the A330-300 fleet, which is only three years old on average. In addition to the six destinations on the east coast of North America, SWISS also currently uses the A330 to serve Delhi and Tokyo. 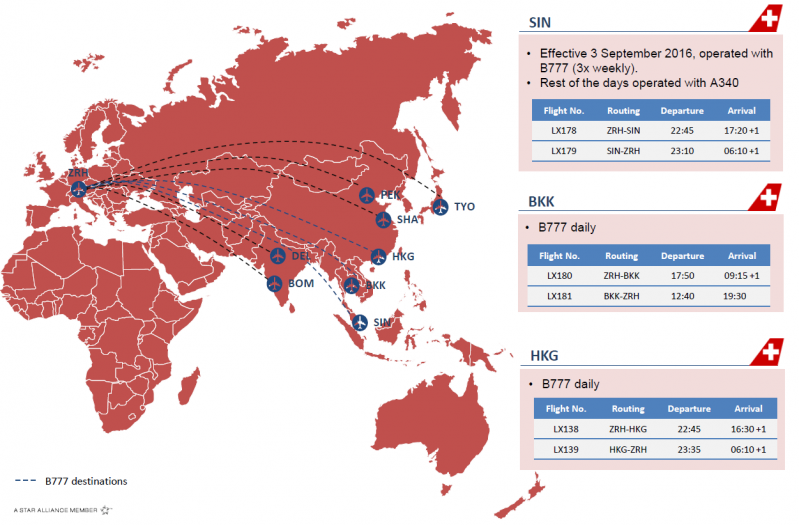 SWISS to keep A340s at Edelweiss, regardless

As SWISS plans to keep operating A330s for at least the next several years, maintaining a small fleet of A340s would not be overly inefficient. The A330 and A340 enjoy significant commonality, including a common cockpit.

The SWISS leisure subsidiary Edelweiss is also planning to start operating A340s in 2017. So far the group has decided to transfer three Swiss A340-300s to Edelweiss, which will operate the aircraft on 14 low-frequency long haul routes in summer 2017. Handing over the entire Swiss A340 fleet to Edelweiss is not an option, given Edelweiss’ relatively small niche.

For now, the A340 fleet still generates 22% of SWISS’ ASKs. The 777 fleet currently generates 20% of the airline’s ASKs, although should overtake the A340 after the three aircraft on outstanding order are delivered in 2017. 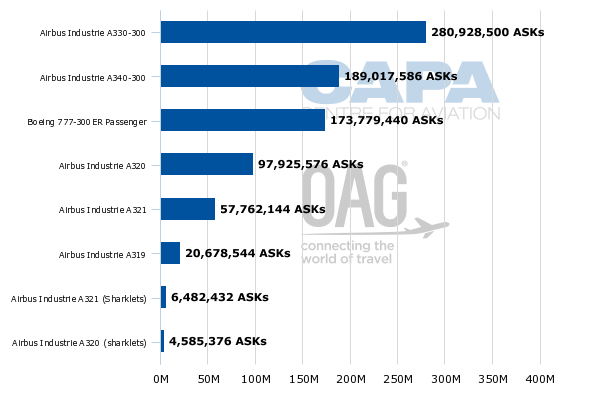 Replacing the last five A340s with 777-300ERs would result in another surge in ASKs, similar to the double-digit increase SWISS is now experiencing following the introduction of the initial six 777s.

For an airline with a small, relatively mature, home market this would be a significant amount of additional capacity. SWISS needs to think carefully as it makes a decision on the last component of its long-term fleet plan.