Fuel surcharges in China and Japan are set to rise, as carriers look to protect revenue in relatively protected North Asian markets.

Japan’s two major carriers, All Nippon Airways and Japan Airlines, announced in late August that they intend to reinstate fuel surcharges on all international flights from 01-Oct-2009. After doing away with most of their surcharges from the end of May-2009, the carriers have brought them back after the price of Singapore kerosene averaged over USD71 per barrel between May and June.

The move by the Japanese carriers follows announcements by Cathay Pacific and Singapore Airlines in early August that they would increase fuel surcharges from Hong Kong after receiving approval by the Hong Kong Civil Aviation Department. Cathay Pacific stated that the USD20 per barrel leap in fuel prices over May had outstripped fuel surcharges.

Meanwhile, the Chinese Government raised jet fuel prices by 6.29% to USD742 per ton on 02-Sep-2009. The increase has renewed speculation that the National Development and Reform Commission will permit carriers to reapply fuel surcharges, after ending them in Jan-2009.

Air China and China Southern Airlines have already applied to resume fuel surcharges, but have not yet received an answer. Air China expects the increasing fuel price to add approximately USD30 million to its fuel costs over the rest of the year.

Indian airlines could follow Japanese carriers as domestic aviation fuel consumption increased for the first time last month since Sep-2008 and Indian fuel prices rose 11% between July and August. The increase in consumption was due to higher aircraft utilisation and increasing levels of international capacity, although the Indian domestic market continues to be depressed.

Fuel down, but waiting on US economic indicators 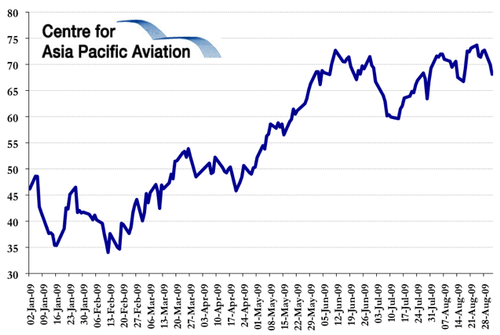 Major oil markets reported declining prices, with New York Harbor down 5.6%, US Gulf Coast down 5.2%, and Los Angeles prices declining 5.4%. Prices were down 3.3% in Amsterdam-Rotterdam-Antwerp, and Singapore prices fell by a similar amount. 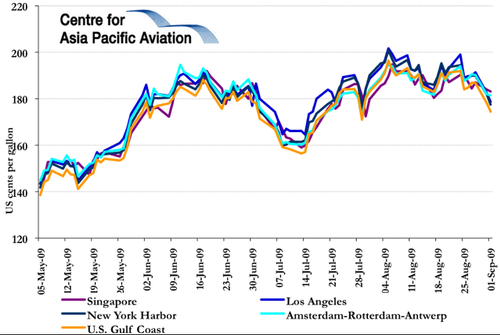 Markets are waiting on the US August jobs report, due out today, for indicators of US economic health and any changes in a tepid stock market. Last week’s US Department of Energy's oil report indicated that although there is a stabilisation in demand, oil and gasoline reserves are declining.