India was the only major domestic market worldwide that failed to show an expansion in demand (RPKs) in Jun-2012 compared with the previous year. This was preceded by almost three years – or 35 consecutive months – of uninterrupted growth, most of it at double-digit rates (all but six of these months witnessed double-digit growth). Up until Feb-2012, India's growth rate was among the highest in the world with double-digit increases in passenger carriage, supported by strong domestic demand and economic growth. 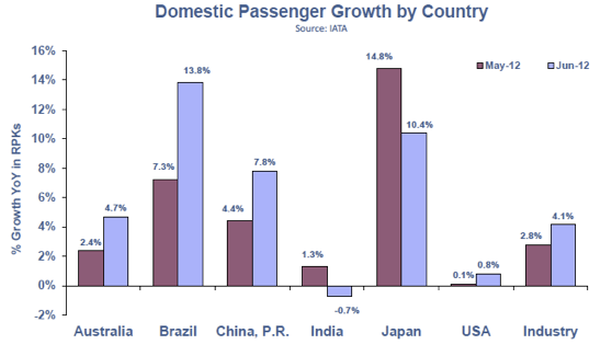 The severe cutbacks by Kingfisher Airlines in particular have put a brake on growth in the domestic market, with the 9.9% contraction in passenger numbers in Jul-2012 marking the slowest month of domestic passenger growth since Apr-2009 when passenger levels declined 15.2%. 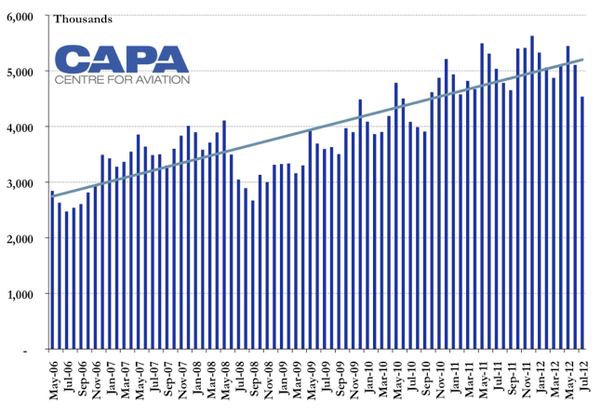 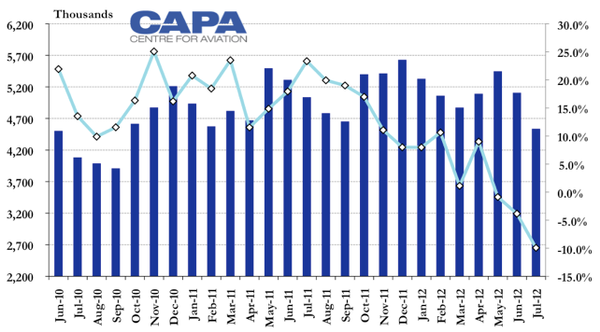 The nation’s airlines in recent months have left capacity virtually unchanged but on a positive note, yields have been stronger in recent months. Increased fare levels, of up to 30% on some sectors, have however had a negative impact on demand. 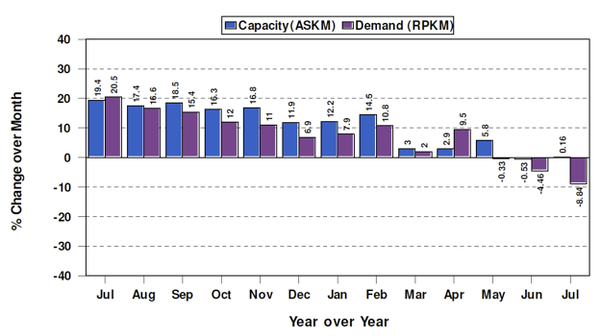 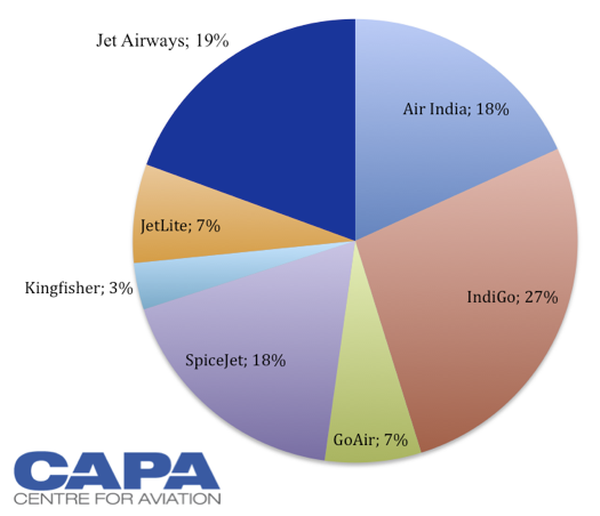 IndiGo has increased weekly capacity by over 30% in the past 12 months, while Jet Airways has been moderating its domestic capacity growth over the last few years with capacity growth coming largely from changes in aircraft configuration related to the transfer of services to its low-cost subsidiary Jet Konnect. 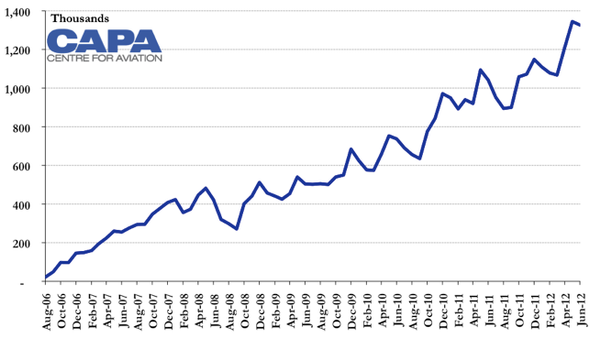 The combined market share of IndiGo, JetLite, SpiceJet and GoAir, reached 59% in Jul-2012. Unsurprisingly, Kingfisher’s market share was the weakest, at just 4.2%, as the carrier sharply cut capacity, operating only 12 to 13 aircraft and 90-100 daily services in its summer schedule, compared with 66 aircraft in 2011, resulting in a sharp slump in passenger carriage. 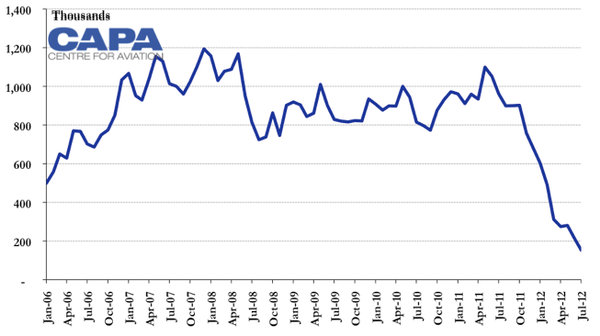 Kingfisher Airlines, in a remarkable turn of events, slipped from being India’s largest domestic carrier to its smallest in the space of only six months amid significant network cuts by the struggling carrier.

Kingfisher Airlines will likely remain as the nation’s smallest carrier in the coming months, as it continues its much-curtailed schedule and amid a "holding plan" put in place pending recapitalisation and a return to full utilisation of the aircraft fleet.

Jul-2012 load factors data shows that in addition to transporting the largest number of passengers in the month, IndiGo, as usual, reported the strongest load factor at 75.5%, although this was down significantly from 86.5% in Jun-2012, reflecting seasonal trends as the peak summer season ends and the domestic market enters its lean season. No airline reported month-on-month load factor gains in Jul-2012, while IndiGo and Air India were the only two airlines which reported marginal increases in load factors in Jun-2012. The sharpest decline, as expected, was seen at Kingfisher, reporting load factors of only 53% despite operating a quarter of the number of aircraft it did a year earlier. 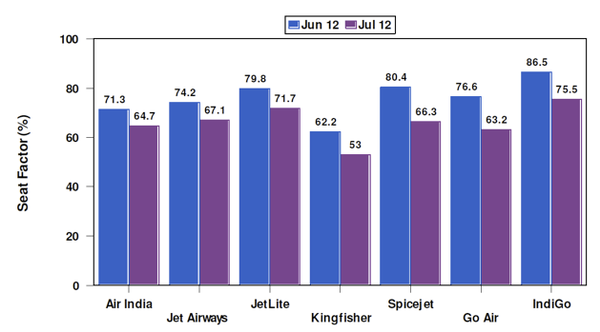 Domestic traffic in India has been flat in 2012 amid exceptional circumstances in the market, with Kingfisher Airlines and Air India both severely curtailing capacity amid strike action and financial woes. CAPA estimates that domestic passenger traffic will grow by 8-10% in FY2012/13 and more likely towards the lower end of the range. Much will depend upon the impact of oil prices and other input costs on airfares. The short-term cost and regulatory environment remains very hostile. CAPA will present its analysis on the 1Q financial performance of Indian carriers later this week.

While the Indian aviation sector is now in a low-growth phase, long-term fundamentals remain positive. India is poised to emerge as the world’s third largest aviation market before 2020 with CAPA forecasting airport traffic to reach 450 million passengers (360 million domestic and 90 million international) along with 6.5 million tonnes of cargo by 2020.