The growth prospects are impressive, but for now Spirit’s revenues from fares on a flight segment basis continue to trend downward.

That may not be an issue as long as the airline continues to push non-ticket revenue up to grow its top-line revenues. However, the airline is also facing some cost creep and is currently projecting a rise in unit costs excluding fuel of 1% to 2% in 2020.

For FY2019, its non-ticket revenue should range between USD56 and USD57 – a sizeable increase from the airline’s 2016 performance. 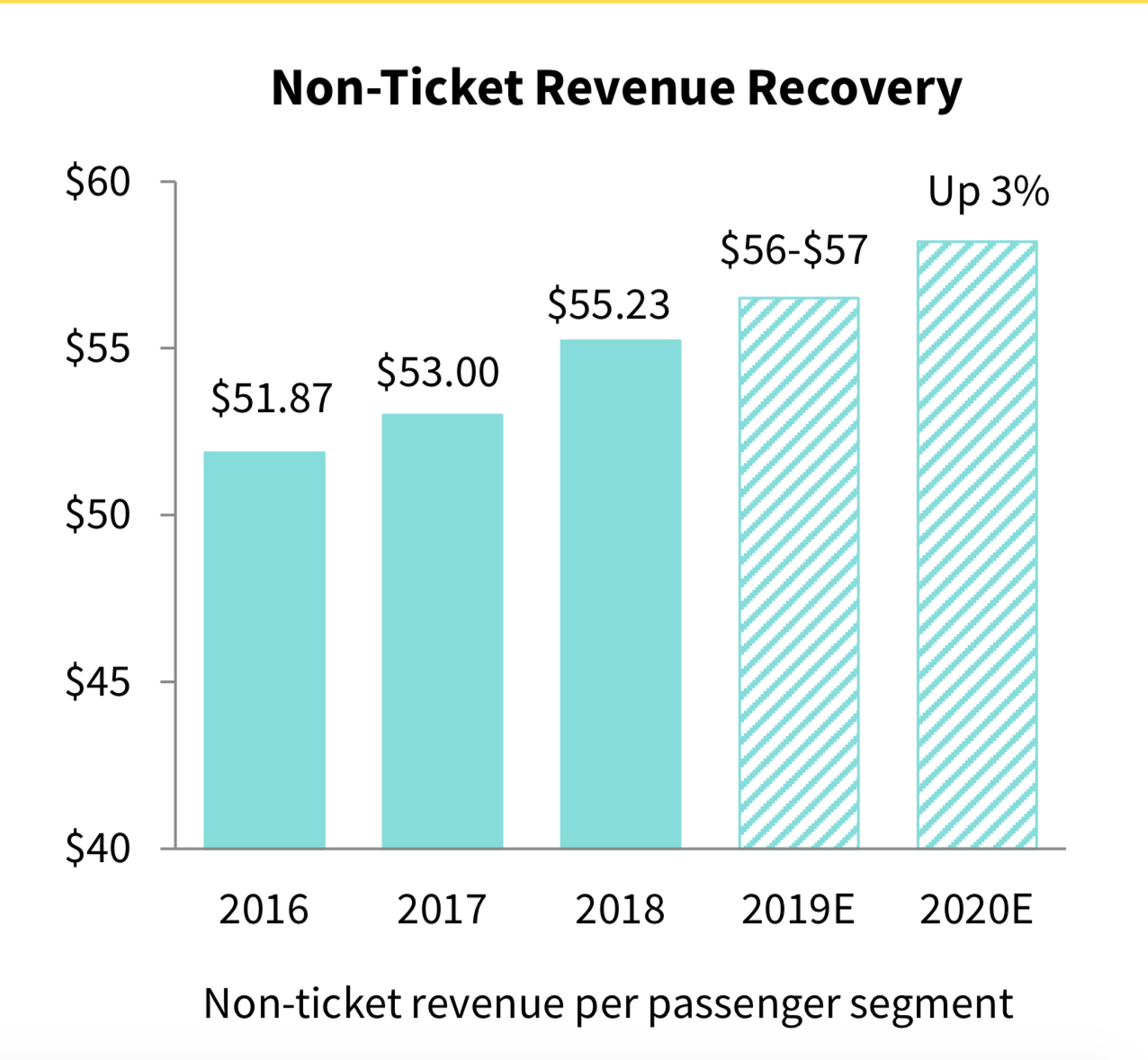 The airline has recently revamped its website and released a new version of its app. Spirit now has push notifications live on its app and expects to improve take rates on sales of its Big Front Seat extra legroom product soon, company chief commercial officer Matt Klein recently stated.

“…We finally got to a place where we feel like we’ve modernised a lot of where we are, and that gives us the ability to really start getting into the merchandising, and from an analytics perspective, what’s going on on the site”, Mr Klein said.

The improvements to Spirit’s website and app have been more than a year in the making as part of the airline’s goal of improving its merchandising and becoming more of an e-commerce company.

Unsurprisingly, Spirit’s goal is to drive as high a conversion rate as it can from the revamped website. The airline is also in the final stages of placing new hotel and car content on its website, which has itself also been a focus for the airline for most of 2019.

Previously, Spirit executives have explained that the airline was making technology changes to its vacation packaging business as well as altering its content providers.

Once the new content is firmly in place, Spirit can focus on better merchandising its vacation packages. However, the airline has remarked that it would take some time to determine when different customers shop for various destinations, and how to create the proper offer at the right time for a shopper.

Spirit has also been engaged in dynamically pricing its ancillary product offerings, which is a strategy that has taken hold in the US industry. But just how dynamic pricing works can be open to interpretation.

For example, he explained that a leisure customer planning a seven-day trip purchasing a ticket three months out might have a different price point for bags from someone travelling on a quick weekend trip to Las Vegas.

“We may have different price points and how we think about take rates on that”, said Mr Klein.

He remarked that Spirit was “getting into the weeds” with respect to the way it refines its analytics. “There are a lot of new ways to analyse our data and bring in new thoughts around matching learning that can really help how we move forward”, Mr Klein said.

Its top line revenues for those time frames increased 9.7% and 16.3%, respectively, pushed by double digit increases in “other” revenues.

Spirit could possibly be attempting to drive passenger volume and reap the benefits of ancillary strategy from pushing up passenger numbers. It expects to transport 35 million passengers in 2019, which would be a nearly 21% increase year-on-year.

The company’s executives have noted that there is a trend in the industry to push some volume to offpeak periods, which are typically lower yielding. However, the airline believes bolstering its non-ticket revenue is impressive, even as yields have degraded.

But those dynamics are occurring against a backdrop of rising unit costs excluding fuel for Spirit. It posted a 5.2% rise in that metric year-on-year for the 9M ending Sep-2019 but expects its unit cost excluding fuel and special items for 2019 to reach USD5.55 cents, which is below the USD6 cent benchmark for a ULCC but still above the USD5.30 cents it posted for 2018.

The airline expects a 1% to 2% increase in unit costs excluding fuel and special items for 2020. That costs guidance could trigger some concern for investors, but a lot of Spirit’s cost challenges have been short term.

Management has acknowledged that that plan was ineffective, leaving Spirit with less buffer in its system and negatively affecting the airline’s ability to recover from adverse weather conditions. The result was higher unit costs excluding fuel, and Spirit has been working to correct the issues that have driven up its unit costs.

Spirit pushes non-ticket sales up as other headwinds emerge

It is not surprising that Spirit is using new technology to grow its non-ticket revenue. Pushing up ancillary revenue is a key pillar of the airline’s business strategy.

The company is facing some cost headwinds and pricing traction on regular airfares, but is likely banking on non-ticket revenue to offset some of those challenges and is making the investments to maximise its ancillary sales.