Spirit Airlines is turning its attention to Minneapolis in late 2013 with a seasonal push to four new destinations to complement its existing service to some of the largest markets from Delta’s fortress where the legacy carrier offers 456 daily departures.

The new links Spirit plans to introduce from Minneapolis in Nov-2013 reflects its stated goal for 2013 of connecting the dots in its network after making a huge domestic push beginning in 2010 into a number of major US metropolitan areas including Chicago, Dallas, Denver, Houston and Minneapolis, a market Spirit entered in Jun-2012. Just prior to that push the carrier plans to transition its Phoenix operations from Mesa Gateway to larger Sky Harbor, joining Frontier Airlines in jumping from Mesa to the larger and more well-known airport.

Spirit is forging ahead with its business model against the backdrop of the recent resignation of board chair William Franke and the sale of Spirit stock owned by his investment firm Indigo. The moves have fuelled speculation that Mr Franke is pursuing Frontier in order to fully transition that airline into a true ultra low-cost carrier.

See related report: Speculation over sale of Frontier Airlines triggers questions over the ULCC evolution in the US

As of 20-Aug-3013 Frontier’s owner Republic Airways Holdings had not announced a buyer for Frontier, but the speculation over Mr Franke’s move has depressed Spirit’s stock price to roughly USD30.72 from its opening price of USD35.65 on 29-Jul-2013, the day Spirit announced Mr Franke’s resignation and the sale of Indigo’s shares.

But as Spirit is in the midst of its seventh year as an ultra low-cost carrier, Mr Franke likely saw his work with the carrier as largely complete, and has opted to pursue other opportunities, the success of which is highly unknown.

In the meantime Spirit is focusing on building breadth in its network after rapid fire growth in large markets most notably Dallas/Fort Worth, whose market dynamics for the foreseeable future will remain status quo given the efforts by the US Department of Justice to legally prohibit the merger of American and US Airways.

Spirit will continue to enjoy the benefits of deploying its ultra low-cost model in a market dominated by a full-service network carrier that charges a premium. Data from the US Department of Transportation show that average fares from DFW fell from USD449 to USD415 year-on-year (not adjusted for inflation) for 1Q2013. Some of that decrease is likely a by-product of American taking advantage of certain cost efficiencies that only Chapter 11 can deliver, but at least a portion could be attributable to Spirit’s aggressive expansion from Dallas, which is now the carrier’s second largest base. 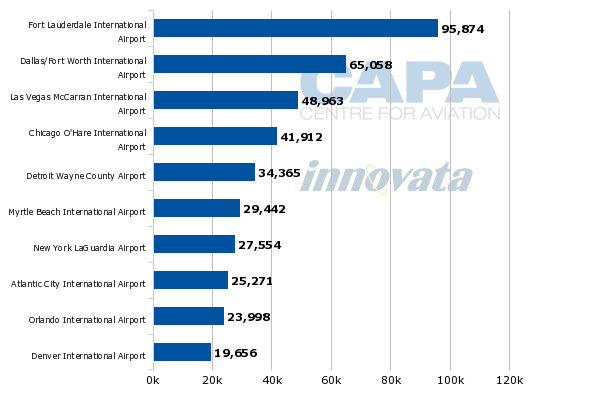 Spirit’s growth in DFW was reflected in data released by the airport for Jun-2013 that showed year-to-date Spirit has transported about one million passengers in Dallas, compared with nearly 476,000 passengers the year prior.

Spirit during the last year has also made a push from United’s stronghold Houston, but not nearly to the extent of its expansion from DFW. Presently Spirit serves Chicago O’Hare, DFW, Detroit, Orlando and Las Vegas from Houston, but plans to eliminate fights to Dallas in Sep-2013.

Following the elimination of its Houston-Dallas service Spirit is also moving its operations in Phoenix from smaller Mesa Gateway to Sky Harbor. Starting in Oct-2012 and continuing through 7-Nov-2013 Spirit will launch service from Sky Harbor to Chicago O’Hare, Dallas and Denver.

Spirit’s flights to Chicago and Denver from Sky Harbor are on a seasonal basis. As is typical of Spirit’s market strategy, it is offering low frequencies – a single daily flight – in the markets from Phoenix, accounting for roughly 7% of the approximately 15,200 seats on offer to Dallas in mid-Nov-2013 (according to schedules from Innovata), 8% of the approximately 15,726 seats available from Chicago and 4% of the nearly 25,300 seats to Denver, which will be served by US Airways, United, Southwest and Frontier. US Airways and American operate service to Dallas while United, American and US Airways operate service to Chicago.

The move by Spirit to Sky Harbor leaves Allegiant as the sole carrier serving Phoenix Mesa. Allegiant established a base at Mesa Gateway in 2007, but the smaller airport is a bit more suited to Allegiant’s two-to-three weekly flights from small US cities to leisure areas.

Sprit’s time at the airport was brief as it launched service in Feb-2012. Frontier also tried its hand at Phoenix Mesa with flights to Denver that began in Nov-2012 and plans to end its service in Nov-2013, citing poor performance on the route. While Phoenix is only a single market and does not constitute a trend, it is interesting that one ultra low-cost carrier (ULCC) and another airline aspiring to that business model have opted to abandon a secondary airport – a classic move from the low-cost carrier playbook.

Spirit told local news outlet azcentral.com that Sky Harbor was better known among the larger markets the carrier serves, while officials from Gateway claimed that Spirit’s load factors from the airport were above 90%. Ultimately, Sky Harbor is more befitting of Spirit’s strategy – to capture lower-hanging fruit at airports dominated by legacy carriers. However, Phoenix is somewhat different in that it serves as a hub for US Airways and Southwest’s sixth largest airport in terms of daily departures (as of Aug-2013).

But Southwest has experienced cost inflation during the last few years, which has resulted in the carrier resting in the middle of higher-cost legacy carriers and the ultra low-cost airlines Spirit and Allegiant. Phoenix typically has a higher leisure traveller mix than many US legacy hubs, but its average fares grew from USD326 to USD334 year-on-year during 1Q2013 (based on DoT data and not including inflation), which might create some inroads for Spirit’s ultra low fares and bare bones product in the market. As is often the case, the seasonal markets could be test vehicles for permanent service.

Phoenix is also serving as a seasonal route for Spirit from Minneapolis beginning in Nov-2013 joining new seasonal offerings between Minneapolis and Tampa, Orlando and Los Angeles.

Spirit entered Delta’s Minneapolis stronghold in Jun-2012 and presently serves Chicago, Denver, Dallas and Las Vegas. Based on current schedules in Innovata (19-Aug-2013 to 25-Aug-2013), Minneapolis-Chicago is Spirit’s third largest domestic market in terms of seats on offer. But overall Spirit only accounts for 15% of the nearly 22,000 seats on offer in the market, which is served by United, American and Delta. On current routes from Minneapolis, Spirit does not account for 15% seat share in any of the markets, with its lowest penetration at 6% in the crowded Denver market served by Delta, Frontier, United and Southwest. Chicago is also served by Delta, Southwest and Sun Country from Midway. 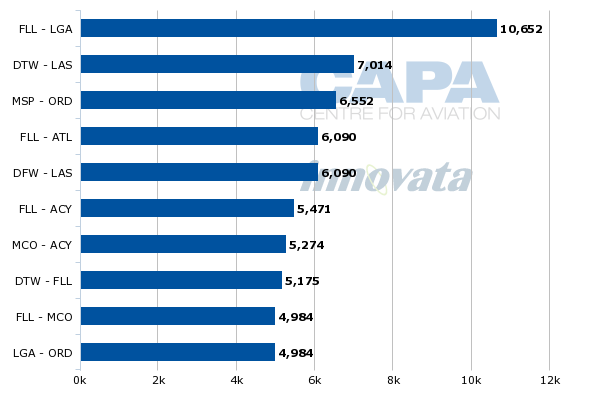 Interestingly, Spirit competes (or will compete) with small carrier Sun Country from Minneapolis to Dallas, Las Vegas, Phoenix, Tampa and Orlando. Sun Country is a privately-owned leisure and charter carrier based in Minneapolis with a loyal following that offers some frills on its roughly 17 Boeing 737-700/800s with a first class section featured on the -800 variant. The price range for upgrades to first class on US domestic flights ranges from USD45 to USD145. Sun Country is somewhat of a hybrid offering frills but at the same time striving to be a low-fare carrier. Minneapolis is a slightly different model for Spirit as it supports service from a hybrid and Southwest, but together those carriers only account for about 9% of the seats on offer while Delta represents 75% of the seats deployed from Minneapolis. 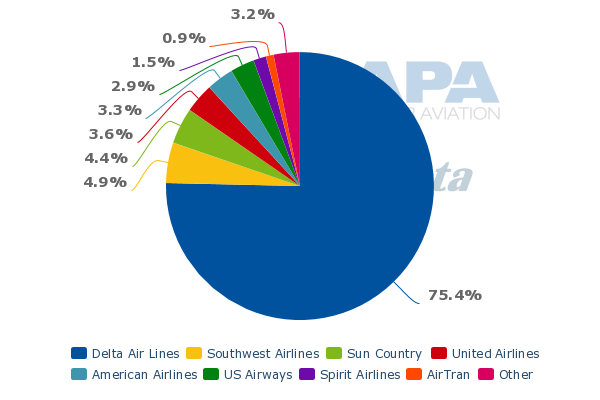 Spirit and Delta are somewhat familiar competitors as the Detroit metropolitan area served as Spirit’s headquarters prior to its 1999 move to Fort Lauderdale and before the Delta-Northwest merger in 2008. Detroit still remains Spirit’s fifth largest base with respect to seats deployed, and is Detroit’s second largest carrier in that metric. But it only holds a 4% share as Delta’s share in Detroit is a dominating 80%.

So far Delta has been the only carrier to slightly respond to Spirit’s entry into some legacy markets. Largely Spirit’s calculus that it is targeting low-yielding passengers legacy carriers no longer wish to pursue has proven viable. During 2012 Delta introduced so-called basic economy fares from Detroit to the sun destinations of Fort Lauderdale, Tampa, Fort Myers and Orlando. But a look at available options for travel during late Sept-2013 from Detroit to Fort Lauderdale indicates a basic economy fare is not available.

Spirit’s business execution seems to be sound, although it is not clear it will keep an ULCC hold in the US

Spirit has made certain network refinements during the last couple of years including cancelling its short-lived Boston-Dallas service, eliminating service between Las Vegas and Philadelphia and Chicago to Detroit.

But its strategy so far of targeting the customers other carriers are abandoning in high fare markets appears to be somewhat successful, as year-to-date for Jul-2013 Spirit grew its traffic by 22% on a capacity increase of nearly 21%. Load factor grew 1ppt to 86%. While Spirit has encountered some operational challenges its profitability growth remains solid, increasing its net income for 1H2013 by 25% to USD73 million.

Spirit often touts that at least 400 markets are ripe for its ultra low fare, bare-bones, pay for most add-ons, service, and its 46% planned fleet growth from 54 Airbus narrowbodies to 79 between YE2013 and YE2015 reflect the bullishness the carrier holds in its business model. Obviously the big unknown is Mr Franke’s next move and if he plans to target some of the same markets Spirit believes are prime for the taking. The next few years could be interesting if Frontier can successfully transform itself to the ultra low-cost carrier it aspires to be.

Spirit Airlines route map as of May-2013 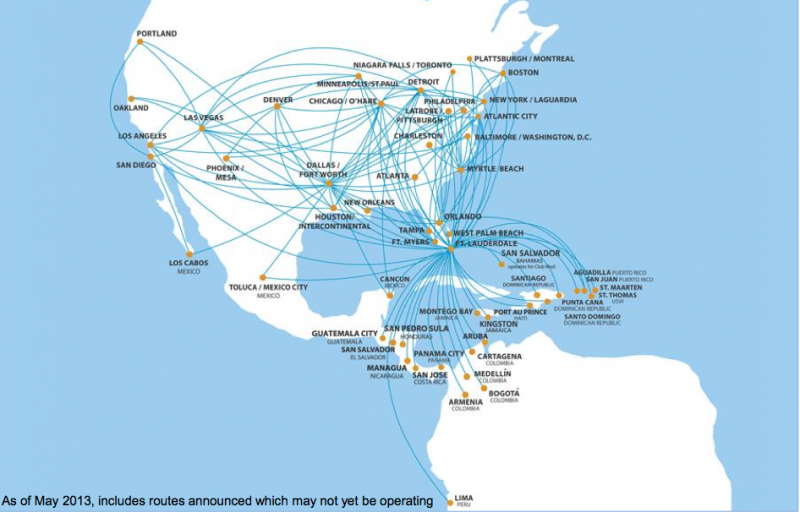