Shares in SpiceJet climbed 6% to INR88.15 yesterday, the highest closing level since 17-Jan-2008, prior to the carrier announcing its financial results for the three months ended Sep-2010 and an order for up to 30 Bombardier Q400 turboprops. The carrier’s shares have gained 55% in 2010 compared with a 17% rise in the benchmark Bombay Stock Exchange Sensitive index.

The carrier reported an operating profit of USD312,413 in the three-month period compared with USD25.4 million loss in the previous corresponding period with a net profit of USD2.3 million, a notable improvement from a USD23 million loss in the Sep-2009 quarter. Revenues strengthened 40%. SpiceJet has reported four consecutive quarterly profits as faster economic expansion and rising disposable incomes stimulates travel demand in the recovery Indian market.

The carrier reported double-digit growth in revenues, which increased 35% to USD111 million with ancillary revenues soaring 41% to USD23 million, and passenger numbers which increased 25% to 1.4 million. The carrier also witnessed 7% growth in average passenger fare to USD61.7 with RASK up 6.8% and ancillary revenue per passenger strengthening 11% to USD15.99. CASK declined 3.1% to USD 4.44 cents but increased 3.1% excluding fuel and forex to USD 2.80 cents.

China’s stocks fell from a six-month high on concern recent gains were excessive given the prospect the government may join India and Australia in tightening monetary policy to curb inflation. The Shanghai Composite Index declined for the fifth time in six days. 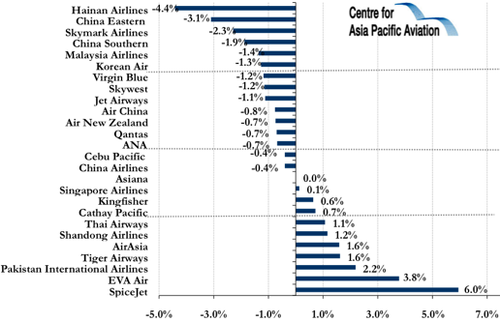