The deal between WestJet and Southwest has unsurprisingly fallen apart with an official announcement on Friday from the Dallas-based carrier. It had been Southwest’s ticket into the Canadian market without having to make the investment in flying its own metal across the border. WestJet is now negotiating a codeshare deal with Delta.

See related report: Where’s the Luv, WestJet? Southwest Airlines kept in the dark on codeshare, as Delta moves in

Southwest notified WestJet on Friday it was terminating the agreement citing the “significant changes” requested by WestJet. The agreement has been in place since 2008 and was set to take effect this year. Southwest said it could not agree to the changes which probably included accommodating the Delta codeshare at LaGuardia which resulted from Delta’s slot-swap deal with US Airways in which it proposed giving five slot pairs at LGA to WestJet. The agreement would otherwise not allow it.

"We prefer the existing terms of our agreement with WestJet,” said Southwest's Executive Vice President of Strategy and Planning Bob Jordan. “Upon reviewing the number of changes that WestJet has requested, we have decided that it is in the best interest of both parties to move forward independently. We remain interested in exploring the possibility of one day offering service to Canada if it makes sense for Southwest and for our customers. That would not rule out future codeshare relationships with Canadian carriers, or flying north of the border ourselves."

Last year, WestJet transitioned to the SabreSonic system in order to accommodate codeshare activity. Meanwhile, Southwest is still working on its technology upgrade to be able do international flights, considered the next wave in low-cost carrier development. WestJet earlier stated that Southwest would not be ready for the planned November implementation of their code-share. It had already been delayed into an unknown date in 2011.

Southwest CEO Gary Kelly, speaking to CNBC, talked about the technology upgrade. "At this point, we are so hard-wired and constructed for domestic that it's just a retooling that underway for us to have the capability,” he said. “Right now, international for us, we have to think of it as a strategy. I want to change that so that it simply becomes a tactic. We'd like to think about flying to Canada if that makes sense for Southwest Airlines and not have to build that. We're in the midst of that transformation process.” 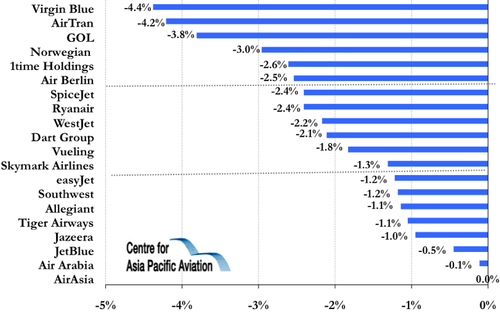