Southwest to buy AirTran; JetBlue shares to rise with profits

Southwest agreed to pay USD7.69/share for AirTran’s common stock, 69% more than the 24-Sep-2010 closing price of USD4.55. Under the agreement, each share of AirTran common stock will be exchanged for USD3.75 in cash and 0.321 shares of Southwest Airlines' common stock, subject to certain adjustments, based on Southwest Airlines' share price prior to closing. Including the existing AirTran net indebtedness and capitalised aircraft operating leases, the transaction value is approximately USD3.4 billion.

Completion of the transaction, which will require both regulatory and shareholder approvals, is expected to close by 1H2011. Commercial and operating integration is slated to culminate in 2012, with both carriers operating under Southwest Airlines' Federal Aviation Administration operating certificate in Dallas. Until the acquisition is approved and finalised, both carriers will continue to operate independently.

Meanwhile, Fitch Ratings affirmed Southwest’s debt ratings following the announcement, with a "stable" outlook. The affirmation of the LCC's ratings reflects Fitch's view that the acquisition represents a “good strategic fit, opening up new and  attractive revenue and margin expansion opportunities for LUV without  driving a significant deterioration of credit metrics”.

Meanwhile, Standard & Poor's Ratings Services placed Southwest Airlines’ ratings on CreditWatch with negative implications in response to its announcement, commenting: "In our view, the combination will weaken Southwest's financial profile, which we characterize as intermediate--the strongest among rated US airlines."

Meanwhile, shares in JetBlue gained 7.1% yesterday, after gains of approximately 10% in premarket trading, as Barron’s described JetBlue as a diamond in the rough and commented that the carrier’s shares could rise as the airline’s profit gains over the next few years.

Barrons stated the carrier is turning its "profits around" and is expected to earn USD1/ share in 2012, up from an estimated USD 0.45 cents/share in 2010 and USD0.60 cents in 2011, for a more than doubling in price.  Barron's stated Deutsche Bank analyst Michael Linenberg has a USD8 price target for the stock while Glenn Engel of Bank of America/Merrill Lynch has a target of USD12.

Barrons commented that that carrier may benefit from its strategy of targeting more premium-paying business travellers, as the New York JKF-based carrier expands alliances with foreign and domestic carriers. 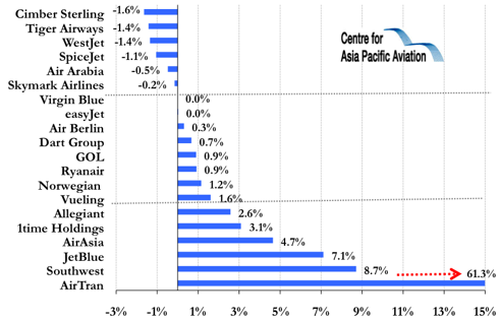