Southwest Airlines’ shares fell 2.8% yesterday to USD13.57, as investors weigh up the outlook for the US LCC sector midway through reporting season.

TradersHuddle.com stated Southwest’s shares have defined support at USD13.22 and resistance at USD13.95. The carrier’s stock has surged around 80% over the past year.

Southwest reported an USD11 million first quarter profit – a significant turnaround from a USD91 million loss in the same period last year, as revenues rose 11.6% to USD2.63 billion. The airline’s fuel costs however surged 17.6% year-on-year and Southwest incurred a USD13 million non-cash loss based on fuel hedging in the first three months of the year.

AirTran reported a USD12 million loss for 1Q2010 but expects surging demand to help it return to profitability. The loss was a better than analysts’ expectations. AirTran advanced 2.8%. The other top performer was JetBlue Airways, which closed yesterday at USD6.65, up 2.0% from the previous trading session. JetBlue will report its 1Q2010 earnings on Friday. 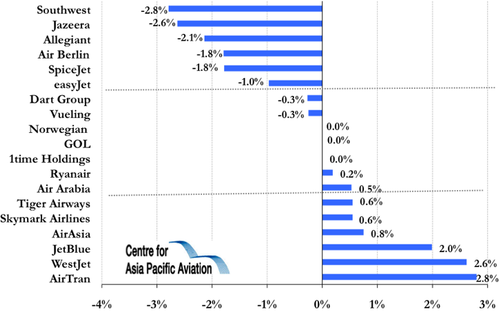