US airline shares rose again on Monday on the back of positive US economic data, raising hopes of demand improvements and future growth, as the world’s largest economy shows evidence of a steady recovery.

Specifically, Institute for Supply Management data showed the US manufacturing sector grew in Feb-2010, while the Commerce Data stated US consumer spending increased slightly faster than expected in Jan-2010, up 0.5%, following upwardly revised growth of 0.3% in Dec-2009, and for four consecutive months of growth. The US economy, meanwhile, grew by 5.9% in the three months to Dec-2009.

Shares in Southwest Airlines set a new 52-week high at USD12.89 yesterday, up 1.0% from the previous day’s close. AirTran's shares soared 5.6%, while JetBlue and Allegiant were also stronger, up 0.6% and 1.7%, respectively.

US airline stocks have been stronger so far in 2010, due to improved balance sheets and passenger demand. With signs of the economy improving further, investors are optimistic that some of the large carriers will report profitable results in 2010. 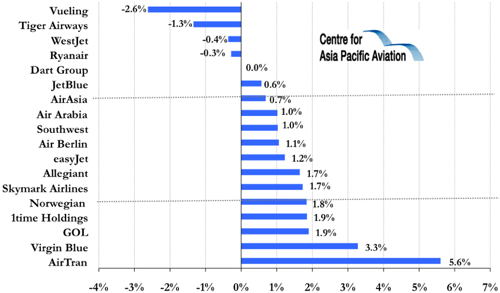