Southwest Airlines’ shares gained 3.1% yesterday, as the carrier reported a 4Q2009 profit and its 37th consecutive year of profitability in 2009, in a year that CEO, Gary Kelly, described as “perhaps, the most difficult revenue environment the airline industry has ever faced”.

On the outlook for 2010, Mr Kelly commented, “there is no doubt 2010 will be another challenging year.  Thus far, the economic recovery is tepid, and we expect record high hedged jet fuel prices for the company."

However, with “strong revenue and booking trends” so far in 2010, the carrier expects another year-on-year increase in unit revenues in 1Q2010 (in 4Q2009, operating revenue yield per ASM increased 7.4%, although passenger revenue yield per ASM declined 6.4%, on a 4.7% reduction in average fares to USD120.21). The LCC added that it has no plans to grow capacity in 2010, although it estimates it increased domestic market share by at least 1% in 2009, despite a capacity reduction in the year (the carrier reduced systemwide capacity by 7.7% in 4Q2009).

In Europe, easyJet’s shares jumped 5.2%, after Europe’s second largest LCC reported a solid set of financial results for the three months ended Dec-2009 and stated it expects to deliver “substantial profit improvement during 2010”.

CEO, Andy Harrison, commented that while conditions remain “challenging” and the LCC expects a continued “tough trading environment”, the “underlying performance of the business in the first quarter has been encouraging.” He added that the “strength” of customer demand in the period enabled the carrier to grow passenger numbers by 9.1% to 11.0 million passengers “with virtually no yield deterioration”, ahead of initial expectations. 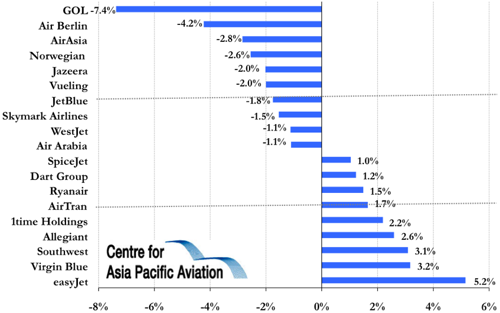