Southwest misses out on Frontier, GOL's shares continue to soar

Frontier Airlines announced that Republic Airways was the winning bidder in the auction to acquire the Denver-based LCC (see Southwest below).

According to Frontier, Republic submitted the “highest and best bid”, which included substantial improvements from its original investment proposal. Southwest's shares closed up 2.6%, ahead of the Frontier disclosure.

In Europe, Ryanair’s shares fell 2.4%, the largest reduction among the major LCCs and one of only a few European airlines to see a share price reduction yesterday. easyJet gained 2.4%. 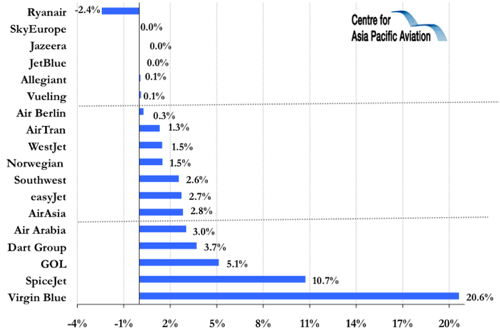 Southwest Airlines confirmed today that its bid to acquire Frontier Airlines was not selected. Southwest submitted a bid of more than USD170 million to Frontier Airlines on Monday, 10-Aug-2009, in accordance with the procedures established in the US Bankruptcy Court for the Southern District of New York.

"We said all along that we would only move forward on this deal if it proved to be the right decision for our Employees and financially prudent for our Company," said Gary Kelly, Southwest's Chairman of the Board, President, and CEO. "We have a mission to preserve and protect our Culture and the best interests of our Employees, Customers, and Shareholders. This was a great opportunity that required us to act fast. A lot of people worked very hard with every intention of making this work. We were fortunate to be in a position to examine the acquisition to see if it was the right decision for Southwest Airlines. We chose not to amend our bid to remove the labor requirement, a key reason our bid was not selected. Our congratulations to Republic Airways and Frontier Airlines."

As stated in its initial statement of interest on 30-Jul-2009, Southwest said there would be several contingencies to be resolved for a deal to go through. Key in its position, Southwest was not willing to remove the need for the two Pilot Unions to reach agreement. Southwest says its Culture and relationships with its Employees are too important to compromise.

"Southwest remains committed to serving the Denver market with our low fares and excellent Customer Service," Kelly said. "We began serving Denver in 2006 with just 13 flights and have grown to offer 112 nonstop daily flights today. We are very pleased with the response we have seen to our service and growth in Denver, and we will continue to compete vigorously in the market."

One of the contingencies in Southwest's proposal was that labor groups from the two airlines would need to reach an agreement on how the two Pilot Unions (SWAPA and FAPA) would work together. Despite a good faith and diligent effort by all involved, including the top leadership of the Southwest Airlines Pilots Association (SWAPA) and the Frontier Airlines Pilots Association (FAPA), who labored long into the night, the two unions were not able to come to an agreement before the auction deadline. As a result, Southwest's bid was deemed unacceptable.

Frontier filed for bankruptcy court protection in April 2008. Southwest submitted its initial indication of interest to acquire Frontier Airlines on 30-Jul-2009, which gave the carrier an opportunity to engage with Frontier in the due diligence required to determine the scope of a binding proposal.