Southwest Airlines, the US industry leader in on-time arrivals since record keeping commenced in 1987, has slipped to eighth in the 12 months to Oct-2010 as it expands at congested airports such as New York LaGuardia and operates with record load factors. As a result, the carrier’s turnaround time has also reportedly increased from 20 minutes to 30 minutes.

The 2010 slump in on-time performance marks a blow for the carrier that was alone among the major airlines in posting a drop in on-time performance in the 12 months. Southwest spokesman Chris Mainz said: “It is a priority for us to make improvements. We have actually added more complexity to our network, along with record loads, and have not seen a dramatic decrease in performance.”

Southwest also attributed its worsened on-time performance to the increase in passenger numbers with CEO Gary Kelly stating that the carrier has seen added traffic due to its policy of being the only US carrier that does not charge for a first or second checked baggage.

Overall percentage of reported flight operations arriving on time and carrier rank, by month, quarter and database to date

While Southwest has maintained an on-time arrivals level at more than 80% for nine consecutive years, rivals’ gains have helped put the industry on course for its most punctual year since 2003.

Another Southwest Airlines spokesperson Ashley Dillon added: "Record load factors during the month contributed to our decisions to delay aircraft and hold for customers who we wouldn't have been able to accommodate if we had cancelled flights. We also know they want us to complete their flight so they can get to their destination, even if delayed. It's a delicate balance we are always mindful of and seek to improve."

Weather played the biggest role in the delays: 33.06% of late flights were delayed by weather in Oct-2010, down from 41.14% in Oct-2009. Weather has again played havoc in Nov-2010 and Dec-2010 with flooding, heavy wind and snow falls all creating flight delays and cancellations in the US. 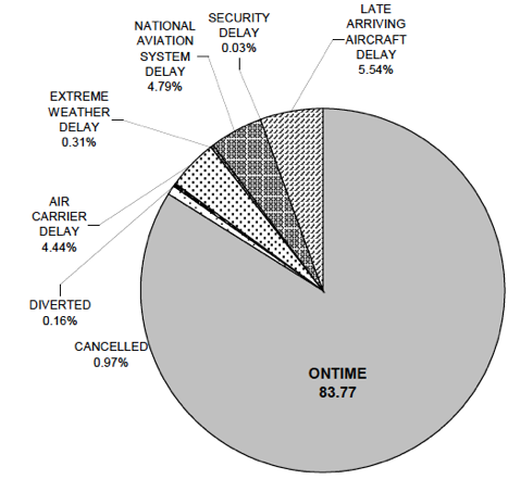 No tarmac delays of more than three hours

There were only 12 tarmac delays of more than three hours reported in the May-2010 to Oct-2010 period by the 18 airlines that file on-time performance data with DoT, compared with 546 during the same five-month period of 2009. The new tarmac delay rule prohibits US airlines operating domestic flights from permitting an aircraft to remain on the tarmac for more than three hours without deplaning passengers, with exceptions allowed only for safety or security or if air traffic

Passengers also complained less about airline service in Oct-2010, filing 749 complaints with the DoT, which is 16.5% fewer than in Oct-2009.

As Southwest evolves its strategy to place a greater emphasis on the business segment, the carrier’s customer service ethic becomes increasing important. While the LCC benefits from being the only US major carrier not to charge for first or second baggage, its recent OTP performance is concerning. With load factors remaining at all-time highs and a continued expansion into key and delay-prone hub airports, the carrier needs to make improvements to ensure its uncharacteristically poor performance does not continue.