Southwest largest US domestic carrier, weighs into B737 debate

In other news, Southwest joined the debate into the reengineering of the B787, with COO Mike Van de Ven commenting: “We certainly recognize the need for new economics. We are indifferent to whether that’s a new airplane or a re- engined airplane. One thing is for sure, waiting until 2025 to make a change is not an option”. Ryanair CFO Howard Millar similarly stated Europe’s largest LCC is "very interested" in a re-engined B737.

Ryanair and Southwest both operate exclusively Boeing fleets with Ryanair having 250 B737-800s in service with plans to increase its fleet to 299 by Mar-2013 while Southwest has 544 B737s in service with 116 on order. In Jul-2010, Boeing commenced that Southwest would be “very involved” in Boeing’s single-aisle decision commenting: “Whatever we do, it’s going to be something that Gary Kelly likes.” 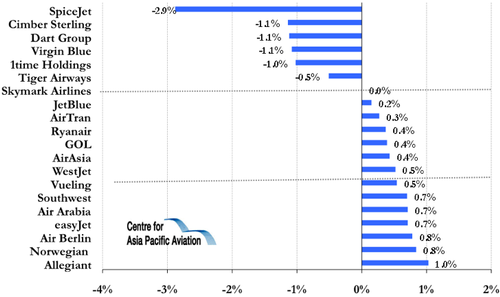