Southwest has 90% of grounded fleet inspected

US Federal Aviation Administration announced it issued an emergency directive on 05-Apr-2011 requiring operators of specific early B737 models to conduct initial and repetitive electromagnetic inspections for fatigue damage. This action will initially apply to approximately 175 aircraft worldwide, 80 of which are US registered. Most of the aircraft in the US are operated by Southwest Airlines. Shares in the carrier were down 1.7%, in a mixed day for LCC shares.

Southwest expects to have nearly all of its grounded aircraft back in the air by late 05-Apr-2011 and to be running a full schedule. Some 90% of the carrier's grounded B737-300s had been inspected.

Virgin Blue announced it has reached a "mutually satisfactory" agreement with Navitaire, the operator of the airline's booking and ticketing systems. Virgin Blue claimed that an 11-day outage of its systems last year cost it up to AUD20 million pre-tax.

SpiceJet stated KAL Airways Pvt Ltd, the controlling shareholder in the Indian airline, has pledged 38.43% of its holding in the LCC . KAL Airways has pledged 60.15 million of its shares, which accounts for 14.84% of the total outstanding share capital in the company. Of this, 31.2 million shares were pledged on 01-Apr-2011. As of 31-Dec-2011, KAL Airways held 38.61% of SpiceJet. KAL Airways is owned by media baron and Sun TV Network Ltd founder Kalanithi Maran. In Jun-2010, Mr Maran and KAL Airways acquired almost 38% in the carrier.

Dart Group, Jet2.com's parent company, stated it is not expecting the cancellation of its services and holidays to Egypt and Tunisia to impact its profits. Dart Group stated profits for the financial year ending 31-Mar-2011 would be “in line with current market expectations”. Jet2 has replaced its Egypt programme with extra services and holidays to Spain and Portugal with the company adding 70,000 seats to these destinations across a number of its bases. 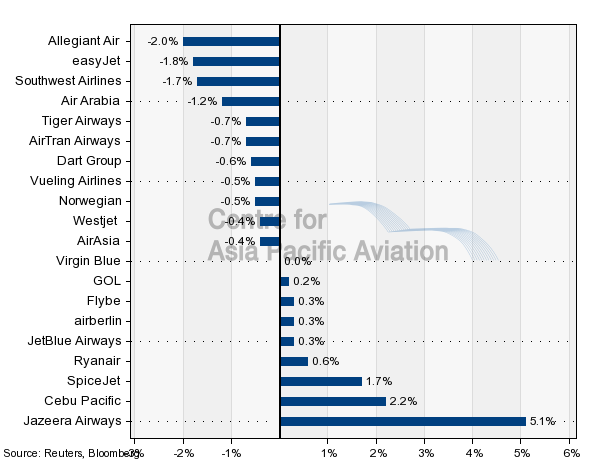