Memphis International Airport is getting a small boost during 2H2013 when Southwest, through its AirTran subsidiary, adds service to Baltimore, Chicago Midway and Orlando in Aug-2013. The new service being introduced by AirTran could possibly help combat the airport’s declining traffic stemming from Delta’s ongoing pull-down of its Memphis hub. AirTran is not directly replacing service to the smaller markets Delta is pulling down in Memphis, but Southwest appears ready to make a larger commitment to the airport as it works to usher in its own branded flights from Memphis later in 2013.

At the same time, Southwest appears to be eliminating some marginal markets from its network as the busy travel season in the US winds down, including the first route cut from Greenville/Spartanburg, South Carolina, a market Southwest inaugurated in Mar-2011. One of the initial markets from Greenville – Orlando, Florida – is being cut during 2H2013. Southwest is also taking over service operated by AirTran in Grand Rapids, Michigan, and adding its own branded flights to some of its larger markets.

Beginning in Aug-2013 AirTran, which currently serves Memphis from its top hub in Atlanta, plans to inaugurate service from Memphis to Baltimore, Chicago Midway and Orlando. Memphis is welcoming the service as significant cuts by Delta during the last couple of years has resulted in the airport’s annual passenger numbers falling 32% between 2010 and 2012. Delta presently has about 94 daily departures from Memphis, a sharp drop from the more than 300 peak day departures from Memphis in 2000 when the airport was a hub for Northwest prior to its merger with Delta. 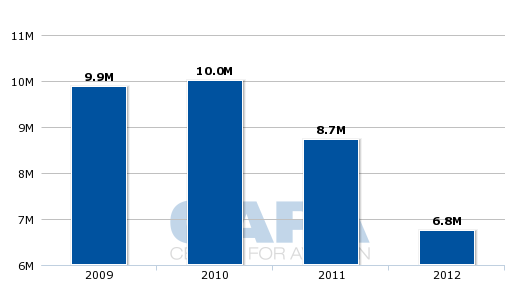 Delta has cut numerous small markets from Memphis as it whittles away its uneconomical 50-seat regional jet fleet and replaces those aircraft with larger 70-plus seat regional jets and prepares to add 100-plus seat Boeing 717s (being acquired from Southwest) to its fleet. Markets Delta has eliminated from Memphis during the last couple of years include Pensacola, Florida; Fort Smith, Arkansas; Birmingham, Alabama; and Jacksonville, Florida. Larger markets cut from Memphis include Seattle, Washington and Fort Lauderdale, Florida. Delta throughout the last 24 months has also instituted significant frequency reductions in small markets from Memphis. Those markets could be at risk for elimination in the future as Delta continues to shrink its 50-seat jet fleet to roughly 125 aircraft in 2014 from a peak of more than 200 in 2008.

AirTran’s planned new service will not significantly restore passenger levels at Memphis, or replace any of the small market cuts, but it does provide the airport operator with some hope that it can attract service from other carriers.

Through its new service from Memphis, AirTran will serve two of its top hubs based on departures – Baltimore and Orlando – and Southwest’s top market of Chicago Midway.

AirTran top markets based on daily departures as of Feb-2013

Southwest top markets based on daily departures as of Feb-2013

The Memphis-Chicago market is already quite populated as American, Delta and United all offer service between Memphis and Chicago O’Hare. Presently current schedules (10-Feb-2013 to 16-Feb-2013) in Innovata show that United accounts for 40% of the approximately 3,349 seats on offer in the market, followed by Delta at 31% and American at 29%. The seating capacity between Memphis and O’Hare rises to roughly 4,250 weekly seats just prior to AirTran’s Memphis-Midway launch in Aug-2013. 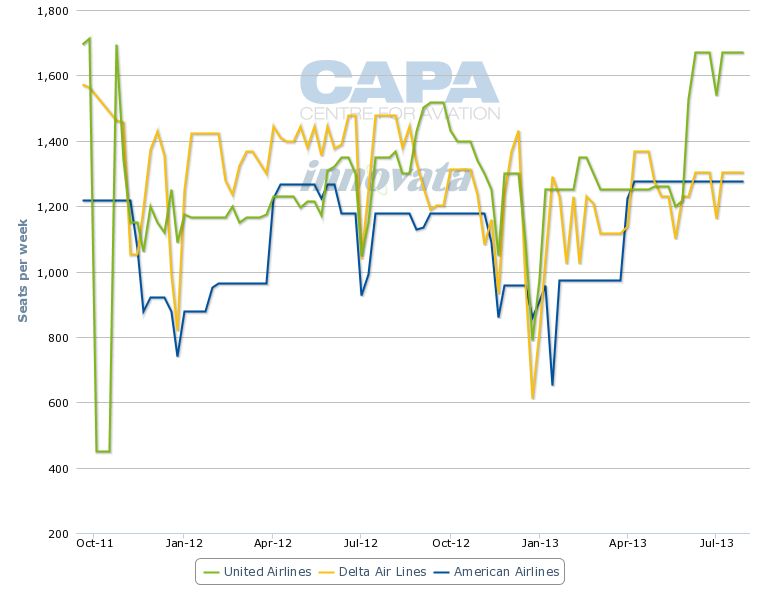 AirTran will also encounter a familiar competitor on the Memphis-Orlando pairing as Delta – AirTran’s main rival in Atlanta – presently offers 2,314 weekly seats on the pairing, rising to roughly 2,740 prior to AirTran’s launch. Orlando is AirTran’s third largest base in terms of daily departures, and accounts for nearly 10% of the airport’s seating capacity. Orlando is a large leisure and convention destination, so Southwest (through its AirTran flights) likely sees an opportunity to undercut Delta’s fares on the flights from Memphis, while Delta will likely retain is elite level flyers.

Baltimore is AirTran’s second largest market in terms of daily departures, so it is a logical choice for Southwest to test from Memphis. Baltimore is also Southwest’s third largest market. The Memphis routes offer a solid test case for Southwest, as some of its more cost-conscious passengers in Nashville, which is 322km away from Memphis, likely drive to Nashville given that Memphis is consistently ranked by the US Department of Transportation (DoT) as one of the top five airports with the highest airfares in the country. The latest data available shows that for 3Q2012 average airfares in Memphis were the fifth highest in the country at USD485.

US airports with the highest average fares: 3Q2012

As AirTran and Southwest launch a fully-fledged codeshare in 2013 and integrate their networks more deeply, Memphis provides a test case to determine if the right mix of connecting and local traffic exists in the city to make it a profitable spoke for some of the larger markets in the combined network of the two carriers.

Southwest does appear to be committed to Memphis for the medium term as local newspaper The Daily News quoted airport officials explaining the AirTran service would likely be converted to Southwest-branded flights in Nov-2013. However, the officials added the conversion also hinges on the strength of the economy going forward.

Southwest during Aug-2013 also plans to convert AirTran’s station at Grand Rapids, Michigan to its branded service and add new flights from the largest city in western Michigan. Grand Rapids is the 11th city that was exclusively AirTran pre-acquisition to be converted to the Southwest brand. Once the conversion is complete, Southwest will assume AirTran’s flights to Baltimore and Orlando and introduce new service to Denver and St Louis. AirTran’s once-weekly service to Tampa, Florida is being cut.

Once the schedule changes are complete, Southwest estimates by upgrading AirTran’s service operated with 117-seat Boeing 717s to its larger-gauge 737s, and with the addition of the two new markets, that it will offer 450 additional seats per day from Grand Rapids.

Southwest faces familiar competitors on flights from Grand Rapids to Denver – both of Denver’s two main carriers United and Frontier offer roughly 1,572 seats in the market. Frontier has a 62% share while United accounts for the remaining 45%. Denver is Southwest’s fifth largest market with 166 daily nonstop flights to 55 US cities. 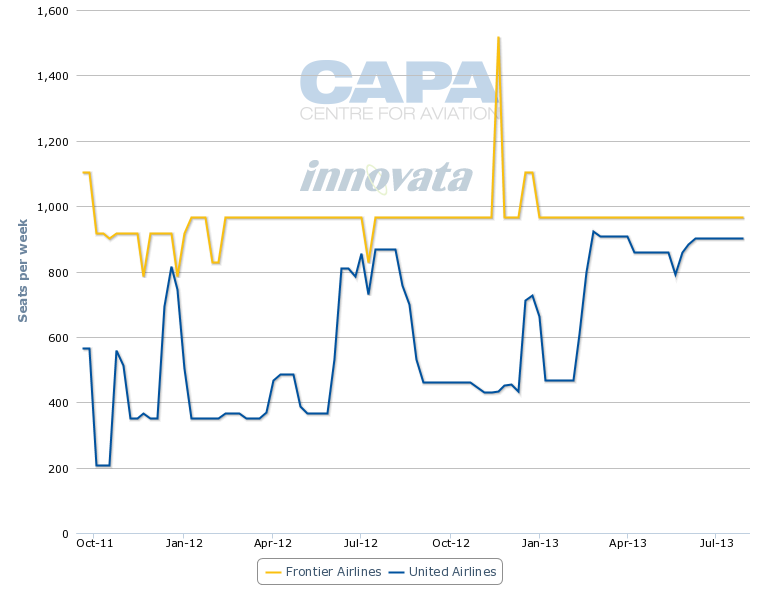 Since it debuted flights from Denver in 2006 Southwest has overtaken Frontier to become the second largest carrier in Denver, representing 28% of the seats on offer behind United's 40% share and ahead of Frontier’s 17% share. Southwest has been able to successfully co-exist with United and Frontier on several markets from Denver, although Frontier has often opted to pursue markets where it is shielded from competition with Southwest. As the largest carrier operating between Grand Rapids and Denver, it will be interesting to see if Frontier pulls back from the market. 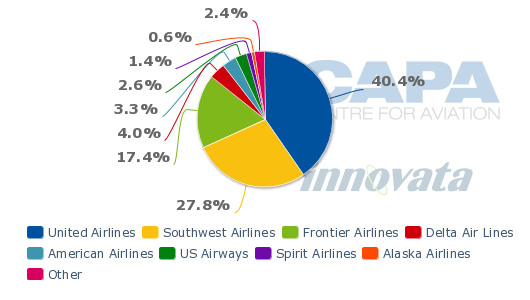 Southwest during 2H2013 is also cutting some smaller markets within its system, most notably Greenville/Spartanburg, South Carolina to Orlando. Greenville is a younger market in Southwest’s network; the carrier inaugurated service to five markets from Greenville in Mar-2011. Presently Southwest operates seven nonstop daily departures to five cities – Baltimore, Chicago Midway, Houston Hobby, Nashville and Orlando. Since its launch from Greenville, Southwest has risen to become the largest carrier at the airport in terms of seats on offer, representing a 27% share. The carrier is uncontested on flights to Orlando, but Allegiant Air serves Greenville from nearby Orlando Sanford. Allegiant is not a huge threat to Southwest, given Allegiant’s roughly 302 seats on offer in the market and its strict leisure passenger focus. 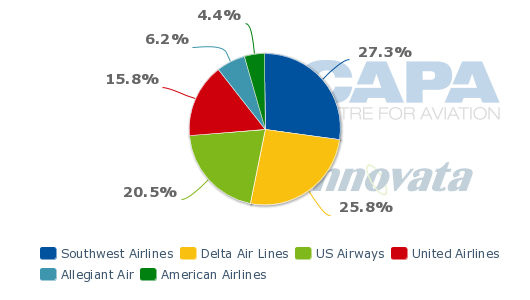 Southwest currently offers roughly 959 weekly seats from Greenville/Spartanburg to Orlando. During 2013 the carrier is deploying more aircraft to its busier markets to offer better options during peak times. Some of its moves in markets with a lower level of seats on offer could reflect its new strategy.

Other markets being cut by Southwest during Aug-2013 include Kansas City-Oklahoma City, Las Vegas-Manchester, New Hampshire, and Chicago Midway-Orange County.

Southwest offers about 950 seats between Midway and Orange County, roughly 58km from Los Angeles International Airport. Chicago-Los Angeles is one of the busiest US markets with American, Spirit, United and Virgin America offering service between Chicago O’Hare and Los Angeles. Southwest also offers service between Chicago Midway and Los Angeles, offering more than 5,000 weekly seats in the market. Its service to Orange County is somewhat redundant in its network.

The carrier offers roughly 1,600 seats from Kansas City to Oklahoma City. Presently Southwest offers flights from Baltimore, Chicago, Dallas Love Field, Houston Hobby, Las Vegas, Orlando, Phoenix and St Louis from Oklahoma City. All of those markets, with the exception of Kansas City, are Southwest’s top markets. This renders service to Kansas City somewhat marginal given fewer passengers will be generated between Kansas City and Oklahoma City since neither market touches Southwest’s top airports. Southwest offers fewer than 900 weekly seats from Las Vegas to Manchester, New Hampshire, making the aircraft serving that market a candidate for deployment into busier markets where the carrier is attempting to manage peak demand.

Southwest’s new service through AirTran in Memphis offers the airport some hope as Delta continues to pare down its operation at the airport. But the small markets that have lost service from the airport have little optimism that flights will be restored as all US carriers centre their flying on larger lucrative markets. Southwest’s own recent network moves reflect that trend, which does not bode well for the numerous smaller US cities that continue to lose air service.