Southwest, Frontier, United and Denver in the News.

Southwest has entered the bidding fray for Frontier. The initial bid is non-binding and simply allows Southwest access for additional due diligence. They have time to review and consider their options and if they decide to proceed, the final ownership of Frontier will be decided via an auction on August 11.

Main points of the bid

Surrounding these facts is a great deal of speculation and rumor. There is a lot of talk about the overlap of operations, Southwest access to slot-controlled airports on the eastern seaboard, and the effect of all of this on United and its position at DIA. Good questions all, but until the deal is done, these are all variables, to be decided.

There is scant information at this stage, but:

Firstly, United has a dominant position at DIA (see the first chart). UA supplied more than 46% of the available seats for the week shown and that is a respectable share for any hub carrier. Frontier and Southwest together would account for 37%, assuming that all the current capacity is maintained. But that is unlikely.

A big difference: Furthermore, given its traditional hub structure, Frontier’s services operate in connecting banks. While Southwest offers connections at many points on its network, flights are timed for aircraft utilisation rather than fast passenger connectivity. Therefore, if Frontier morphs into Southwest, the current scheduling will be considerably revised.

Finally, given Sputhwest's stated intent to replace the Airbus fleet with B737s which have similar seating capacity across the fleet, destinations may lose or gain capacity depending on the current Airbus service. 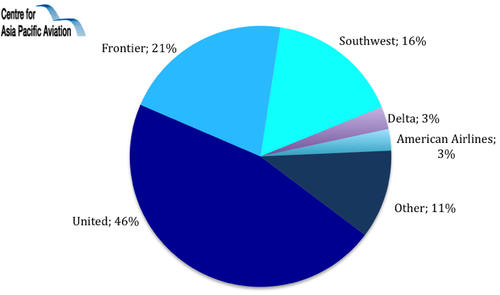 That is all good information, but it is far more interesting to look at the way those available seats are deployed and just how the merger of Southwest and Frontier might change the landscape. The large and somewhat unwieldy chart that follows tracks every destination in the Americas which currently has non-stop service from Denver. In addition there are non-stops to London on UA (which are about to disappear) as well as on British Airways and a Lufthansa flight to Frankfurt.

Despite the size of the chart, it is evident that a great majority of the non-stop destinations have UA as a participant -109 to be exact. This contrasts with 34 for Southwest and 54 for Frontier, with most of Southwest's 34 overlapping. Furthermore, the number of points served exclusively by UA is 50, almost equal to the Frontier total.

Routes that are partially or wholly served by regional partners are indicated with an asterisk and again it is immediately noticeable that there are very few points served by UA that do not have at least some service on partner aircraft. These include all the Canadian destinations (shared with Air Canada) as well as even a portion of the trunk routes to cities like Los Angeles, Portland and Minneapolis. Those contracted seats are variable and can be altered with little effect on the mainline core structure.

More important is the dense coverage provided by United across the Midwest and mountain states, most of which have little or no competition from either Southwest or Frontier. While the passenger flying between San Francisco and Denver may have a choice of fares and service, the traveler from Palm Springs to Missoula has far fewer options and a merged and expanded Southwest is not likely to challenge United for that traffic.

As a result, the situation is probably not nearly as cut and dried as some are inferring. United is doubtless displeased by this development. It is threatened far more by an expanded Southwest than by a newly minted Republic operation, but it is difficult to see this as the fatal blow to UA.

And inevitably it would not all be plain sailing for Southwest in putting the operations together. 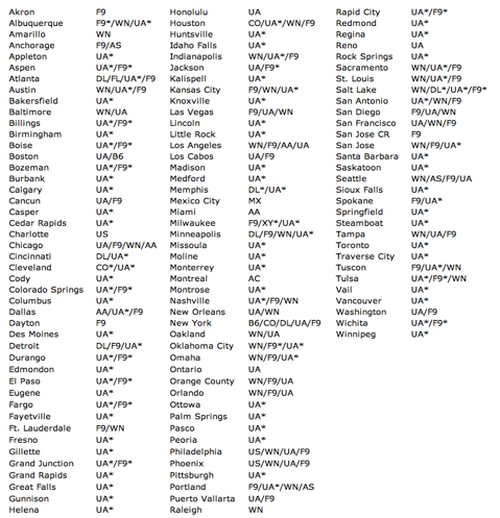 Finally, fares. There has been a lot of cursory discussion of higher airfares for Denver folk should this merger occur. For many observers, this is a stock assumption in any case of consolidation. Southwest’s model however is not to raise fares in monopoly or duopoly situations. The carrier's lower cost base makes profitability possible at fares that generally set a new baseline in the market and tax competitors to make money by matching.

To test this line of thought, one example is the current roundtrip fares from Denver to Raleigh-Durham and Tampa. While all three competitors have non-stop flights to Tampa, only Southwest flies non-stop to Raleigh. The distances are comparable with RDU 1432 miles from Denver and TPA 1504.

The results are shown in Table 2. Far from exploiting its exclusivity on the route, Southwest’s Raleigh fare matches the lowest available on the far more competitive Tampa sector. United offered a connecting TPA fare of $294.30 but even that option was more expensive than either of the other two non-stops.

The nature of airline pricing is such that there certainly other dates and destinations where the picture is less clear-cut. Nonetheless, the idea that a greater presence by Southwest will result in higher fares from Denver is simply out of character. That’s just not how they operate. If they are making money at those fares, their strategy is simply to grow capacity.

The very fact that Southwest has made this move and has not ruled out either international expansion or regional feeder service indicates that Southwest’s management is open to tweaking the business model if deemed necessary (although its unions will have something to say).

The story certainly will have many more chapters and perhaps even a surprise ending. Come back to read more.