AirAsia X stated it is currently in talks with Middle Eastern investors, including institutions and sovereign wealth funds, for fresh capital to fund its European and African expansion plans.

The carrier plans to expand to destinations that are “unexploited, under-served”, including destinations in Spain, Scandinavia and East and North Africa. AirAsia's shares were steady yesterday.

Also looking to Europe is Jetstar, which stated it is again considering expanding into Europe in the next two years, and is looking into new Asian hubs to become stopovers for the services, following the Qantas Group’s announcement of plans to lease a further four A330 (and possibly a fifth) aircraft for the subsidiary. According to Jetstar CEO, Bruce Buchanan, a change in design on the new A330s meant the aircraft would have improved payload capability, enabling the carrier to offer services to Southern European destinations without restrictions. The carrier is also actively expanding its Pan-Asian strategy, with the carrier planning to increase capacity from Singapore by 46% in FY2010.

In the US, Southwest Airlines' shares fell 4.1% yesterday, after Jesump & Lamont downgraded the carrier’s stock from “hold” to “sell”, stating the shares were overpriced as the carrier is profitable, but not growing.

The analysts set a price target of USD4 for the shares, with this price almost 13 times the estimated earnings per share for 2010. The analysts also expressed concern that the carrier’s slow-growth strategy will limit the carrier’s earnings potential over the next 18 months. The carrier plans to reduce capacity (ASKs) by approximately 6% in 2009. 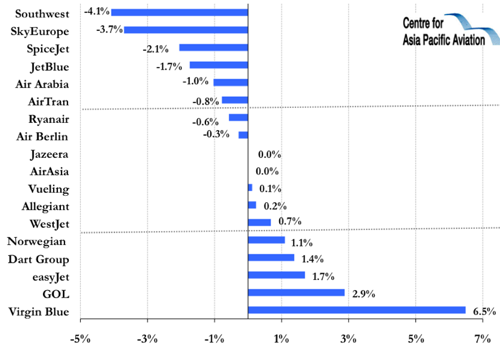