Southwest Airlines yesterday confirmed it is preparing a non-binding bid to acquire Frontier Airlines, which will be sold at auction in bankruptcy court next month. The bid is worth a minimum of USD113.6 million, higher than Republic Airways’ court-approved USD108.75 million bid. Southwest Chairman, President, and CEO, Gary Kelly, stated, “we are excited about the opportunity to submit a bid”.

Frontier filed for bankruptcy court protection in Apr-2008. The Republic offer appears to be more attractive to Frontier, although the carrier is carefully circumspect. Republic would leave the single hub carrier largely intact, working together with Chautauqua Airlines, Republic and Shuttle America. Meanwhile Frontier bravely still "expects to emerge from Chapter 11 this autumn".

For Southwest, the acquisition of Frontier would increase its market share by around 10%, but combining the two carriers' fleets may be problematic, with Southwest flying B737s and Frontier flying A319/A320 aircraft. Frontier also has much lower employee costs.

A separate operation at first

If successful at next month’s auction, Southwest would aim to integrate Frontier's operations, disposing of Frontier's A319/A320 fleet and transitioning to B737s. Southwest stated on its website, Frontier would "operate as a wholly owned subsidiary, independently and separately from Southwest Airlines, for a period of time until the carrier could be combined with Southwest”. It added, “over time, Frontier employees would be hired into Southwest as needed to support our fleet growth and expanded operations."

Putting the two airlines together will not be easy. Frontier is present in all but two of Southwest’s 34 non-stop destinations from Denver, where Southwest commenced services some three years ago. Competition between the two companies (and United, which also retains a hub in Denver) has been intense.

However, Mr Kelly stated, “we see a strong fit between our company cultures, a mutual commitment to high quality Customer Service, and similar entrepreneurial roots." 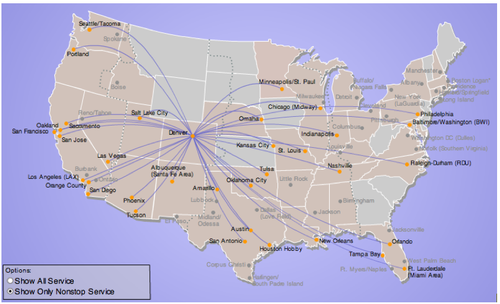 Frontier serves 50 destinations in the US from Denver, as well as one in Canada, five in Mexico and one in Costa Rica.

Southwest stated, “a successful acquisition of Frontier Airlines will allow Southwest to expand its network with its legendary low fares, add jobs into Southwest, and boost competition in Denver and other cities”. 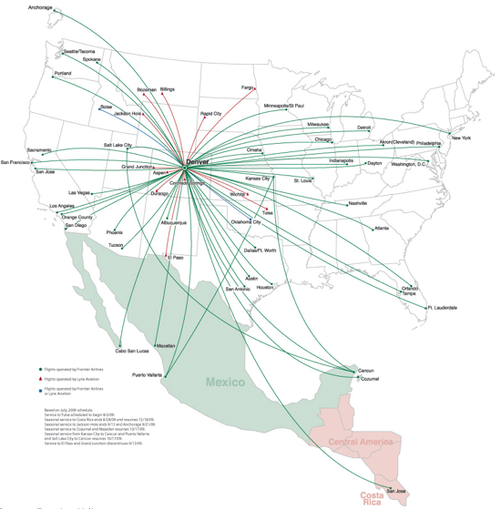 Both the Republic and Southwest offers are well below the price Frontier would achieve in "normal" times. That is a large part of its attraction and, despite the different aircraft types and competing route structures, Southwest must estimate that the downside is minimal - the offer is, after all, non-binding at this stage.