North and South American airline shares were slightly lower on Friday (29-Oct-2010) mirroring wider markets. The Dow ended trading flat, while in Latin America, Chile’s IPSA (+0.5%) made a slight gain, as did the Brazil’s Bovespa (+0.5%).

Southwest Airlines was flat for the day. CEO Gary Kelly stated the day prior he wants Boeing to re-engine the B737 for improved fuel efficiency. Mr Kelly stated Boeing is "a very fine partner" but added that Southwest eventually might be forced to consider competitors' offerings if it is not satisfied with its options. Mr Kelly stated he is "skeptical" about the B737 replacement adding: "We've been talking to them for years" with no firm replacement plans. Mr Kelly added that Boeing has informed Southwest that it will make a decision by the end of the year regarding whether to re-engine the B737 in the interim.

The carrier has also stated it may add Hawaii to its network with a decision expected before the end of 2010 as to whether the carrier will add larger B737-800 equipment to its fleet. Mr Kelly stated if it adds the B737-800 aircraft to its fleet, it would "bring us the opportunity to consider a destination like Hawaii."

SmarTrend idenitified the following airlines as having the lowest sales per share in the American airline industry:

Elsewhere, Hawaiian Airlines (-3.8%) suffered the biggest decline of the day, with Atlas Air (-2.2%) and FedEx (-1.3%) also down. GOL (+1.7%) and Air Canada (+1.6%) gained. Air Canada CEO Calin Rovinescu stated during the week that Canada’s aviation policies and airport taxes are pushing Canadians to purchase cheaper flights from airports in the US near the Canadian border. Plattsburgh Airport in New York state estimates approximately 85% of its passengers are from Quebec. 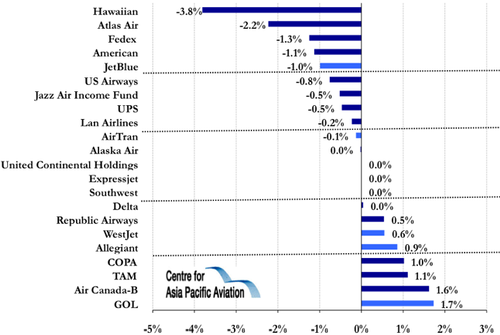