There are several moving parts to Southwest’s revenue, cost, and capacity forecasts for the remainder of 2017, but the airline is projecting a positive message for each metric, concluding that revenue headwinds are easing and cost inflation is largely weighted toward 1H2017.

Technology spend and recently negotiated labour contracts are pressuring Southwest’s unit cost performance in 2017, but after posting unit cost growth in the high single digits in 1H2017, the airline is aiming for flat growth by 4Q2017.  Its unit costs excluding fuel for the full year will grow in the low single digits.

Southwest is going on the offensive by offering a capacity outlook of less than 4% for 1H2018. The company is experiencing a lot of puts and takes with its fleet over the course of next year as it retires its Boeing 737 Classics and begins deliveries of next generation Boeing 737 MAX narrowbodies. The company seems to be offering a 2018 forecast to allay investor concerns over potential protracted capacity growth in 2018.

Southwest joined its rivals American and Delta in revising initial 1Q2017 unit revenue forecasts that were more optimistic. As the quarter progressed, Southwest adjusted its projections from flat growth, to a decrease of 1%, to a decline of 2% to 3%.

The company’s unit revenues fell 2.8% in 1Q2017, and among the challenges Southwest highlighted were soft US GDP growth in 1Q2017 and weather issues. But the biggest headwind was a lingering competitive yield environment.

Similarly to many US airlines, Southwest has adopted a positive future view on the revenue environment. Although the airline’s forecast of a 1% to 2% rise in 2Q2017 unit revenue does benefit from calendar placement of the 2017 Easter holiday in April, Southwest has said that even without the USD10 million benefit of the shift, year-on-year revenue trends are positive.

The airline has said that it reached an inflection point on unit revenue in Apr-2017, and Southwest calculates its 2Q2017 RASM outlook represents approximately four points of year-on-year sequential improvement from 1Q2017.

Southwest goes on the offensive with capacity projections for 1H2018

Southwest has been consistently offering guidance of 3.5% capacity growth for 2017 since late 2016. For 4Q2017, the airline projects less than a 1% increase year-on-year.

Some investors are spooked by capacity growth at some of Southwest’s rivals, including United – which has upped its 2017 forecast due to the conclusions from a comprehensive network review, that the airline needed to focus more intently on the US domestic market.

Few US airlines have offered any insight into their capacity outlook for 2018; but Southwest recently declared its growth for 1H2018 would fall below 4%. The airline has stressed that the 7.3% and 5.7% growth rates recorded in 2015 and 2016 were unusual, and the expectation is that Southwest has no plans to aspire to those rates. 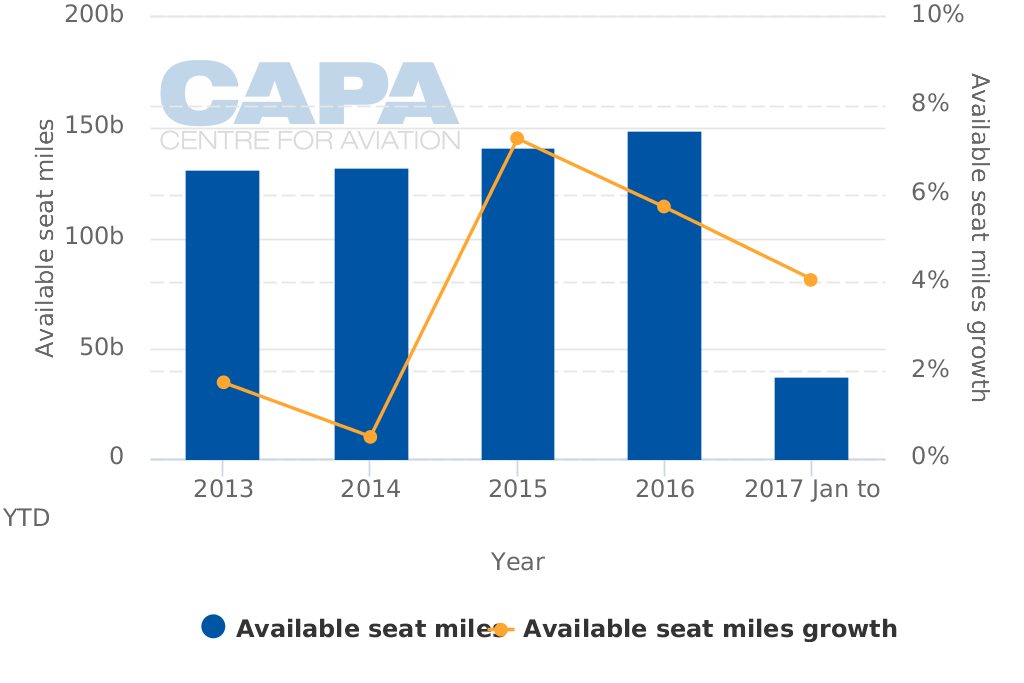 Some of Southwest’s lower growth for 2017, compared with previous projections of 2018, is driven by the retirement of its Boeing 737 Classic fleet, a process which is scheduled for completion by the end of Sep-2017.

Southwest Airlines fleet summary as of 1-May-2017

The retirements have created wide variances in Southwest’s fleet plan from 2017 to 2018, which could be the reason the airline is offering some capacity guidance for early 2018.

Southwest Airlines projected delivery dates for aircraft on order, as of 1-May-2017 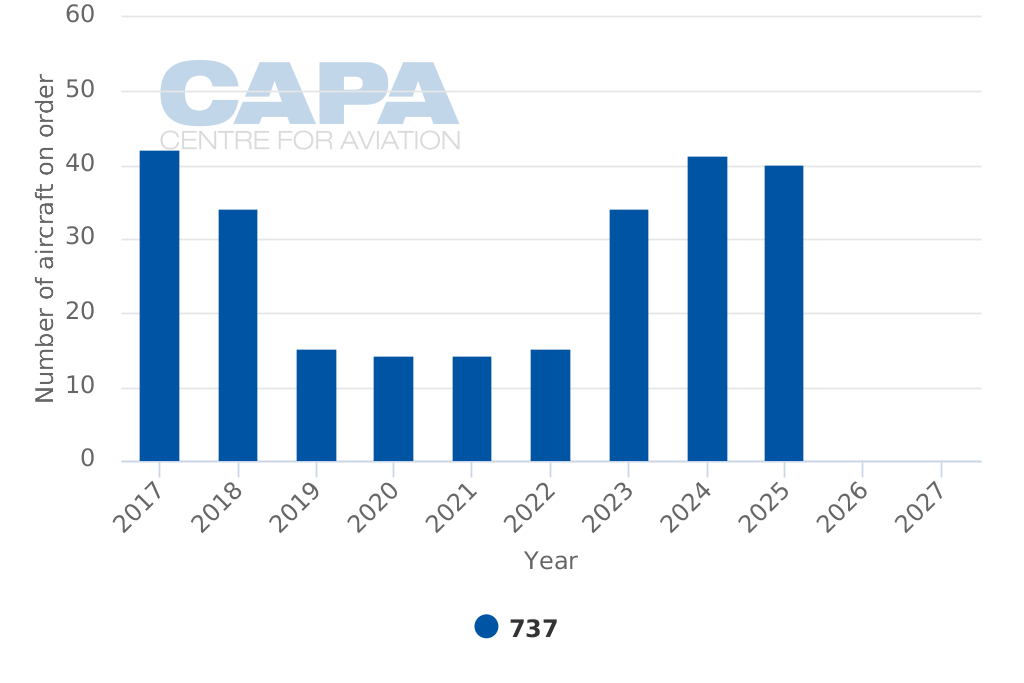 The airline has four exercisable aircraft options available for 2018, but no decision has been made regarding those aircraft. Southwest is taking great care to stress that its capacity evaluations are meant to match growth with demand, and balance the necessary growth of its route system with the issue of meeting return and profit targets. The company’s return on invested capital for the 12M ending 31-Mar-2017 was nearly 28%. Profits in 1Q2017 fell 32% year-on-year, to USD351 million.

Southwest is joining every other US airline in facing unit cost escalation in 2017, driven primarily by the ratification of new labour contracts. After contentious negotiations, the airline struck deals with its pilots and flight attendants in 2H2016, and the company’s unit costs excluding fuel, special items and profit sharing jumped nearly 7% year-on-year in 1Q2017.

The bulk of the increase was driven by Southwest’s new labour contracts and USD40 million on spend for a new reservation system set to debut in May-2017. Southwest’s salaries, wages and benefits expense jumped 12.6% year-on-year during 1Q2017, to USD1.7 billion.

Despite the cost escalation in 1Q2017, Southwest issued USD673 million to shareholders through buybacks and dividends, which was a 13% increase year-on-year.

For the full year 2017, Southwest’s unit cost growth will moderate to 3% and, for now, the airline believes it can attain flat growth in 4Q2017. Some of the logic driving Southwest’s better cost forecast for 2H2017 includes 1ppt in cost savings from retiring its Classics, with a decline in depreciation and maintenance costs. Southwest’s topline depreciation and amortisation expense grew 9.7% year-on-year in 1Q2017, to USD318 million.

Markets appear to be comfortable with Southwest’s forecast cost escalation for 2017. As of early May-2017, its stock valuation was not far off yearly highs of nearly USD59 per share.

Southwest also still remains an industry leader in other key financial metrics. Its market capitalisation remains on par with that of Delta Air Lines, and its trailing twelve month P/E ratio is the best among the four largest US airlines.

Market capitalisation and trailing 12M P/E ratio for the four largest US airlines, as of early May-2017

Southwest is taking great care to outline its capacity logic to markets that are growing increasingly concerned about an uptick in supply within the US market. The company has a more complicated fleet flux than some of its peers, which is likely driving Southwest’s proactive communication about its planned capacity growth.

For many US airlines 2017 is a year of cost inflation driven by labour expense resets and increasing fuel costs, which will pressure margins as companies work to restore sagging revenues. At this point, markets seem comfortable with Southwest’s proactive capacity forecasting.