North and South American airline stocks were mixed on Friday (06-Aug-2010), with Latin American and Canadian airlines moving higher and US airlines falling. US airlines were down after the Dow (-0.2%) slipped on reports US employment fell for a second month in Jul-2010.

Southwest Airlines (-0.9%) slipped, despite reporting a 17-18% year-on-year improvement in passenger revenue per ASM (PRASM) for Jul-2010.

US Airways (-1.6%) was one of the biggest decliners of the day, despite news the US Department of Transportation (DoT) approved the carrier’s plans to launch Charlotte-Sao Paulo service. The carrier is now awaiting approval from the Brazilian Government to launch the route in 2011. US Airways plans to lease Sao Paulo slots from United Airlines through to 2015 for the service. The carrier launched Charlotte-Rio de Janeiro service in Dec-2010.

ExpressJet (-0.5%) also moved slightly lower, after news a number of shareholders have launched legal investigations into SkyWest's plans to acquire all outstanding common shares of the carrier. The shareholders’ lawyers are investigating possible breaches of fiduciary duty and other violations of state law by members of the Board of ExpressJet Holdings in connection with the acquisition plans.

Under the terms of the announced tender offer, ExpressJet shareholders will receive USD6.75 per share in cash for each share of ExpressJet they own, if the tender offer is completed. As recently as 09-Jun-2010, at least one analyst had set price targets for the Company at USD8.00 per share. The transaction is expected to be completed in 4Q2010.

Elsewhere, Latin American carriers LAN (+3.8%) and GOL (+2.7%) were the day’s biggest movers, as wider markets were not as significantly affected by the US employment data. Republic Airways (-1.8%) and JetBlue (-1.3%) were down. 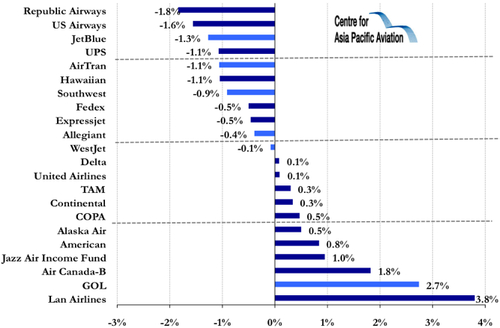