Robust US domestic demand helped to drive a strong 3Q2014 financial performance at Southwest Airlines as nearly 99% of the airline’s total capacity is deployed in the domestic market. Southwest delivered solid results across the board, in both top-line revenue growth and cost performance and in other important metrics including passenger unit revenue growth and unit cost.

The airline recorded a pre-tax 19% return on invested capital (ROIC) for the 12 months ending 30-Sep-2014, which is leading to questions about the possibility of raising its targets in that metric as Southwest seems poised to reach its stated goal of 15% pre-tax ROIC for CY2014.

Southwest’s limited international exposure could continue to benefit the airline in the short term as large US network airlines American, Delta and United are refining their capacity in certain global regions in an attempt to restore a favourable supply-demand balance.

American recently stated that competitive capacity is increasing 10% in the Pacific, Latin American and trans-Atlantic during the winter 2014/2015 time period, and that demand is not quite in line with those growth levels.

Southwest posted passenger unit revenue growth of 4.9% year-on-year during 3Q2014, the best performance among the US major airlines. 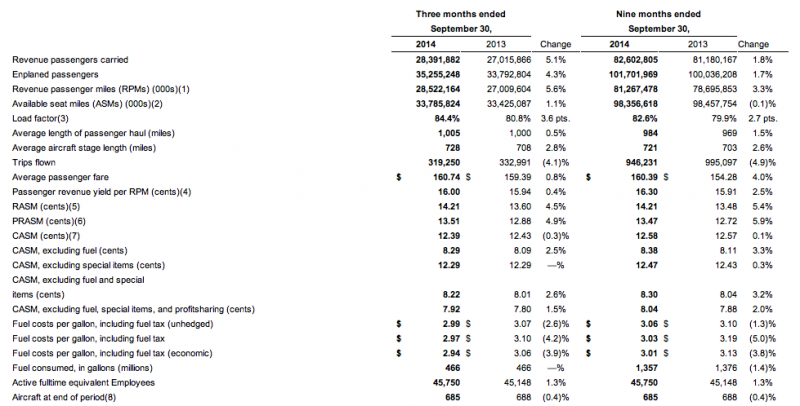 Southwest CEO Gary Kelly stated that a stable US economy is driving consumer confidence and more consistent travel demand. He also explained that Southwest is enjoying some benefit from optimising its route structure, which has entailed eliminating underperforming routes from the legacy AirTran network.

Southwest projects an increase in seat deployment during 2015

Mr Kelly also stated that “the industry is not adding a lot of capacity as well”, and remarked that the supply-demand ratio appears balanced.

Southwest’s capacity during 3Q2014 increased 1% year-on-year, compared with consolidated growth of 0.5% at United Airlines, 2% for American and 3% for Delta Air Lines. United’s domestic capacity decreased 1.3% year-on-year during 3Q2014, American’s grew by 1% and Delta recorded a 4% rise in domestic supply.

Southwest remarked that domestic demand remains strong during 4Q2014. But it cited “choppy” revenue trends as the Thanksgiving holiday is relatively late this year, pushing some return traffic from the holiday to early December.

But it appears all the US major airlines are preparing to increase supply during 2015, including adding domestic capacity. Even as its fleet is projected to remain essentially flat year-on-year, Southwest is projecting a 3% rise in seats during 2015.

All the airlines stress that the rise in capacity is mainly driven by aircraft upgauge or the densifying of aircraft, which the companies conclude as efficient supply expansion. Southwest in particular believes that where it is expanding is an important factor in 2015, emphasising that the carrier is leveraging benefits of the Wright Amendment repeal that eliminates restrictions on certain long-haul routes from its Dallas Love Field base.

The airline is also expanding at Washington National after gaining slots at the airport divested by American and US Airways in order to gain approval for their merger from the US Department of Justice (DoJ). By the end of Nov-2014 Southwest will serve 14 destinations from National with 44 daily departures compared with 17 daily departures to seven destinations in Aug-2014.

Given the strong domestic performance each major US airline has recorded so far in 2014, it can be reasonable to assume that the domestic market will absorb the planned 2015 supply expansion as most of the airlines are attempting to keep their overall capacity growth in line with GDP forecast, which for the US is approximately 2% growth in 2015. 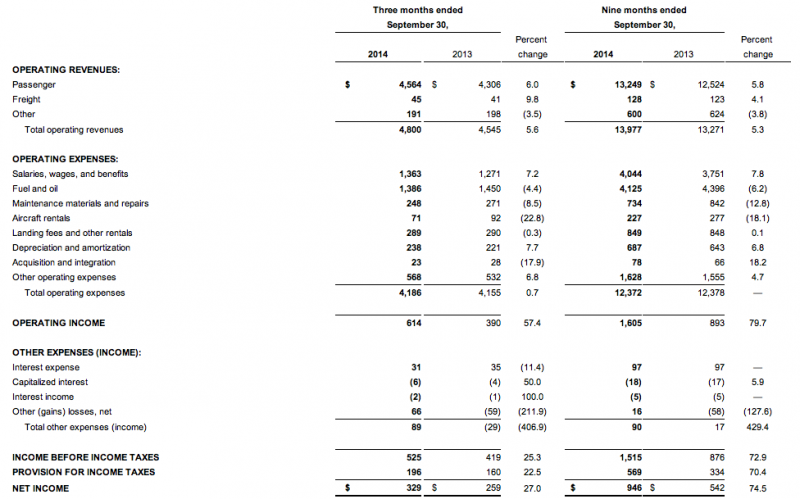 During 2014 Southwest has been engaged in labour negotiations with most of its employee groups, and has stated that it needs to achieve cost efficient collective bargaining agreements in its negotiations. For the nine months ending 30-Sep-2014, Southwest’s top-line increase in salaries, wages and benefits was 7.8%. Even as the airline is making some progress in its negotiations to create contracts that do not further diminish its historical cost advantage, it is still not clear what effect the negotiations will have on its cost and margins going forward.

After missing its 15% ROIC targets during the last couple of years, Southwest has recorded a strong performance in that metric in 2014. As it closes in on its goal, the airline is now fielding questions about raising its targets.

Southwest is contemplating that discussion for its Nov-2014 investor day. But Mr Kelly did remark that Southwest is operating in an environment where “we are exceeding the minimum threshold”, and more precise guidance about its ROIC goals would be available in the coming weeks.

See related report: Southwest has clear sights on its ROIC targets after a strong 2Q2014 performance

As a long-standing investment grade airline, Southwest has returned USD2.1 billion to shareholders during three years. It distributed USD41 million in dividend payments during 3Q2014 and repurchased USD200 million shares.

For the three major global network airlines, 2014 could be described as the year of shareholder returns as each company has formalised plans to issue some form of rewards to investors. Delta has increased its dividend by 50% in 2014.

With the US airline industry continuing to show encouraging signs of sustained favourable financial results, questions are arising over how much of free cash flow could be used for shareholder returns. Mr Kelly stated that as long as Southwest continues to meet its minimum ROIC target, and especially in an environment where earnings are increasing, he could envision some sort of payback through dividends.

Mr Kelly remarked that he does not believe Southwest’s dividend is fully matured. However, he also stressed he was not suggesting there is a commitment to grow the dividend, but there are opportunities to consider that in the future.

Southwest should continue to post solid results for 4Q2014 and 2014 given its strong positioning in the US domestic market, where demand trends continue to hold steady. As it continues to capitalise on the strength in the US domestic market, Southwest seems to be contemplating changes in its shareholder reward package to set itself apart from its US peers, reflecting the rising importance of shareholder returns as a competitive differentiator among US airlines.

The biggest challenge looming for Southwest is the uncertainty of its labour negotiations and working to ensure some of the cracks that have emerged in its historically favourable employee relations do not deepen. Some tough negotiations lie ahead, but in the short term Southwest seems on track to deliver strong results in key financial metrics.