For the last couple of years a pre-tax 15% return on invested capital (ROIC) has eluded Southwest Airlines. But with a 12M trailing ROIC of 14% as of 31-Mar-2014, the airline is exhibiting a new-found confidence that 2014 may just be the year when it finally reaches its return goals.

However, as in the past the carrier has given itself some buffer in case those targets begin to fade during the course of the year as it explains its return estimates are based on continued favourable fuel cost and a relatively stable economy.

Southwest’s assessment of finally reaching its return goals is built on a solid financial performance during 1Q2014 and a positive outlook for the current quarter. But two well-entrenched challenges could still create some headwinds for the carrier – cost creep and labour strife.

After missing its 15% pre-tax ROIC goal during the last couple of years, Southwest is not surprisingly fielding questions regarding if that specific target is optimal given that growth carriers have higher returns (Spirit Airlines’ pretax ROIC for 12M ending 31-Dec-2013 was nearly 32%) and Southwest’s larger airline peers have targets that are in the 15% range. (Delta’s ROIC for the 12M ending 31-Mar-2014 was 16.4%)

Recently Southwest CEO Gary Kelly explained that looking across other industries, the carrier believes that 15% is an adequate return. He remarked that Southwest historically hit those return targets over the course of the 1970s, 80s and 90s. “So that history alone would tell you that it is not a layup to hit that,” he concluded.

Mr Kelly did conclude that 15% would not remain Southwest’s return target over the long term, but for 2014 that was the airline’s stated goal.

The confidence Southwest is now exuding in reaching its return targets in FY2014 is also triggering questions about its growth prospects once (and arguably if) its ROIC goals are finally met. The airline’s planned flat capacity growth for 2014 remains unchanged as its fleet remains in somewhat of a flux as AirTran Boeing 717s exit the combined Southwest-AirTran fleet and larger-gauge 737-800s are delivered. During 2014 Southwest is adding 33 -800s with 175 seats (versus 143 for the -700s).

Southwest has not firmed its capacity plans for 2015, but expects a 2% to 3% rise in seat growth for the year as additional -800s are added to its existing fleet.

As to whether Southwest has plans to ramp up capacity once it reaches its 15% pretax ROIC, Mr Kelly remarked that if the carrier can keep costs in line and fuel prices remain stable during the next decade, then there are significant opportunities to grow, in the low-single digits on an annual basis. Some of Southwest’s potential growth lies in its ambitions to serve more near-international destinations as the carrier in Jul-2014 begins service in to Aruba, Nassau and Montego Bay under its own banner. Previously those flights were operated by AirTran. (Southwest purchased AirTran in 2010 and expects to complete the integration and retire the AirTran brand by YE2014.)

Southwest executives estimate that eventually international pairings could represent 10% to 15% of the carrier’s total operations, up from a mere 1% in 2014. With the US domestic market at full maturity, Southwest has no choice but to look beyond the country’s borders to ensure it has profitable growth opportunities.

Southwest could see some cost reduction once its fleet flux subsides

Keeping its costs in check is a big driver if Southwest is to meet its growth and financial targets. In the short term the carrier is facing some pressure as unit costs are expected to rise 2% to 3%in 2014, driven by increased technology spend, and continued integration as 737s operated by AirTran are idled as they convert to the Southwest configuration.

As it moves into a more normalised fleet in the 2015 timeframe Southwest may have an opportunity to drive down costs as it essentially is adding seats without the addition of large number of aircraft shells. Mr Kelly remarked the carrier’s estimated 2% to 3% seat growth in 2015 “should come at a very modest cost relative to a normal view of a fully allocated unit of growth”.

One element Southwest has not factored into its cost guidance for 2014 (or presumably beyond) is the effects of labour negotiations it is having with most of its employee work groups. During the last couple of years Southwest has been pounding the drum that is needs to widen the narrowing cost gap it has with its legacy peers. Its USD8.50 cent unit costs excluding fuel, profit sharing and special items was lower than American, Delta and United, but solidly higher than the USD7.94 cents recorded for CY2013.

Some of Southwest’s 1Q2014 cost pressure stemmed from operational disruptions from severe winter storms. The carrier estimated a USD50 million reduction in 1Q2014 profits due to the severe weather that struck the eastern and mid-US in Jan-2014 and Feb-2014.

Southwest faces a tough time in obtaining the necessary contracts that allow it the flexibility to reduce costs. But Mr Kelly assured that there are things Southwest can do for its employees while keeping the company strong. There is no doubt some level of disagreement that remains between management and employees as to how Southwest can achieve its cost goals while ensuring its employees remain content, which means difficult negotiations are in store for both sides.

As those negotiations continue Southwest has a bullish outlook after recording USD159 million in profits for 1Q2014 versus USD59 million the year prior. Revenues increased 2% to USD4.2 billion while top-line expenses fell 1.6% to USD4 billion, resulting in a 207% jump in operating income to USD215 million. 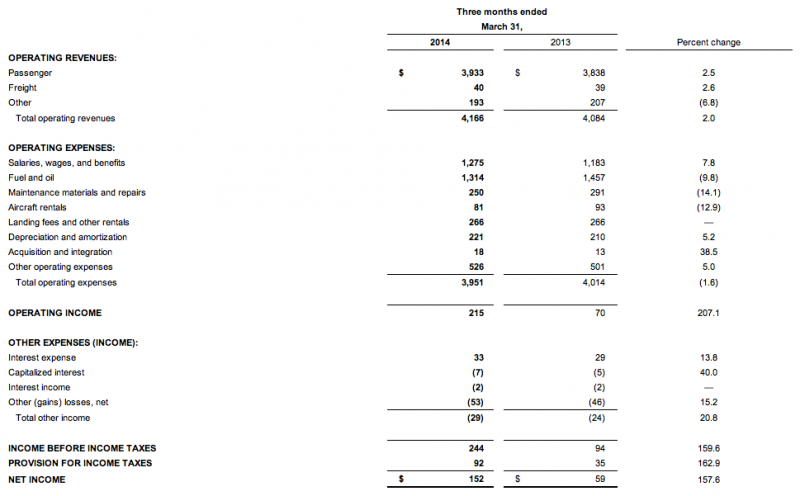 Southwest’s unit revenues grew 3.5% year-on-year to USD12.90 cents, in line with United Airlines, who has been battling weak unit revenue performance for the last year. Including its regional operations, United operates 1,265 aircraft versus 695 at Southwest, yet both carriers posted nearly the same unit revenues in 1Q2014.

As one month of 2Q2014 is nearly complete, Southwest expects Apr-2014 passenger unit revenues to grow 6% to 7% as all carriers will see the benefit of the Easter holiday shift to that month. The carrier also concludes that bookings for May-2014 and Jun-2014 also look favourable.

Southwest does not need a repeat performance of missing ROIC goals

Roughly a year ago Southwest also laid out its plans to achieve a 15% pre-tax ROIC and as 2013 progressed those sentiments waned as unit revenue growth during 1Q2013 was a bit sluggish.

One encouraging sign is Southwest did improve its 12M trailing ROIC performance at 31-May-2013 by nearly 6ppt from 8.3% to 14.2%. Its strong first quarter results do give Southwest some footing to re-ignite its quest to meet it long-stated return goals. But the carrier must be cognisant that if prospects start dimming in its quest in achieving return targets, its credibility could be tarnished as investors increasingly draw conclusions that its pledges are hollow. Perhaps Southwest will have better luck meeting its goals in 2014.