South Korea is the latest Asia Pacific country to announce significant relaxation of the international travel restrictions that were put in place as a response to COVID-19. But while this will make visiting South Korea much easier, the country’s major airline is still cautious about demand recovery expectations.

The pace of border reopenings and quarantine reductions has been increasing across Asia Pacific in recent months. However, onerous testing requirements and a lingering wave of infections from the Omicron variant will still dampen international demand recovery in South Korea and elsewhere.

Korean Air intends to add some international capacity back in coming months, but it is not able to make more aggressive moves until more demand constraints are removed. This means it is keeping many of its passenger widebodies parked, while its domestic and freight operations do the heavy lifting.

While the airline would, no doubt, want to have reactivated more of its international network and fleet by now, it is still relatively well placed when compared with others in the Asia Pacific region.

Like many other countries, South Korea saw a dramatic spike in COVID-19 cases in the first quarter as the Omicron variant emerged. Although the severity of such cases has generally been lower, case numbers have dwarfed those in previous waves of COVID-19.

New case numbers topped 600,000 per day in mid-Mar-2022. The chart below indicates that South Korea’s Omicron wave has peaked, although case numbers are still high. 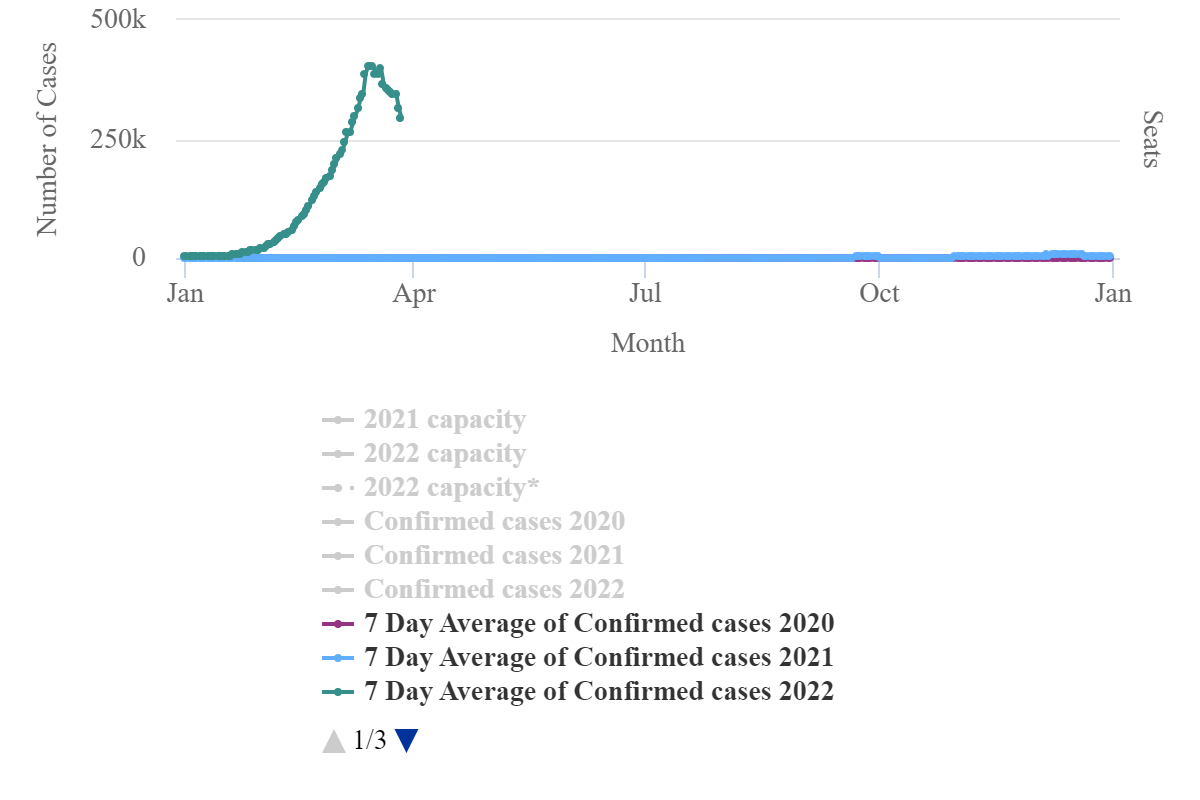 Korea has a relatively high vaccination rate. As of 27-Mar-2022, 87.6% of South Korea’s total population had received at least one dose of the COVID-19 vaccine, according to the Our World in Data website. The share of the total population considered fully vaccinated is 86.7%.

Removing quarantine is an important step, but post-arrival testing remains

The major change announced by the government in Mar-2022 was that the majority of travellers arriving in South Korea from 1-Apr-2022 will no longer need to quarantine. Only a handful of countries are not covered by this exemption, and they are not major markets for Korea.

There are two ways arriving travellers can be classified as fully vaccinated: one is that they must have received two shots at least 14 days prior to travelling, but also within a 180-day window; the other way is to have received a third shot as a booster.

Of course, there are still testing requirements. All travellers must submit a negative PCR test taken within 48 hours of departure. Almost all passengers must also take a test within 24 hours of arrival, and again on the sixth or seventh day.

South Korea’s international traffic is yet to see significant growth

So far, the entry requirements have kept international arrivals to South Korea at very low levels.

Data from South Korea’s Ministry of Land, Infrastructure and Transport (MOLIT) shows that while there was an improvement from last year, Feb-2022 international passenger numbers were still only 4.3% of the total for the same month in 2019. 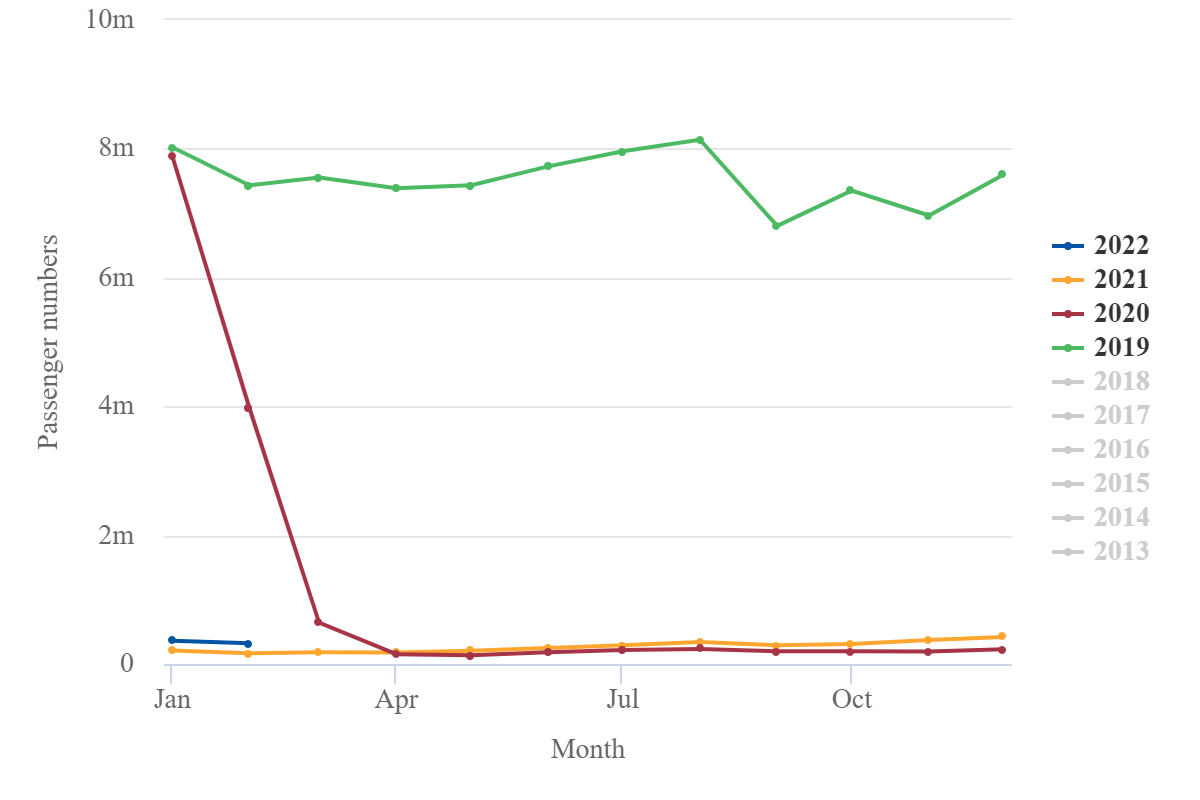 In contrast, domestic traffic has been surging.

Domestic travel was above 2019 levels in eight of the months of 2021, and in Feb-2022 it was nearly 18% higher than pre-pandemic levels, according to MOLIT data.

Korean Air may see slight uptick from Apr-2022, but real recovery is elusive

Korean Air’s international passenger capacity level has been down significantly. It has not dropped as low as many other Asia Pacific airlines through the pandemic, but it has also not increased to a substantial degree.

For the week of 28-Mar-2022, the airline’s international capacity as measured in weekly seats was 14.8% of the level from two years earlier. 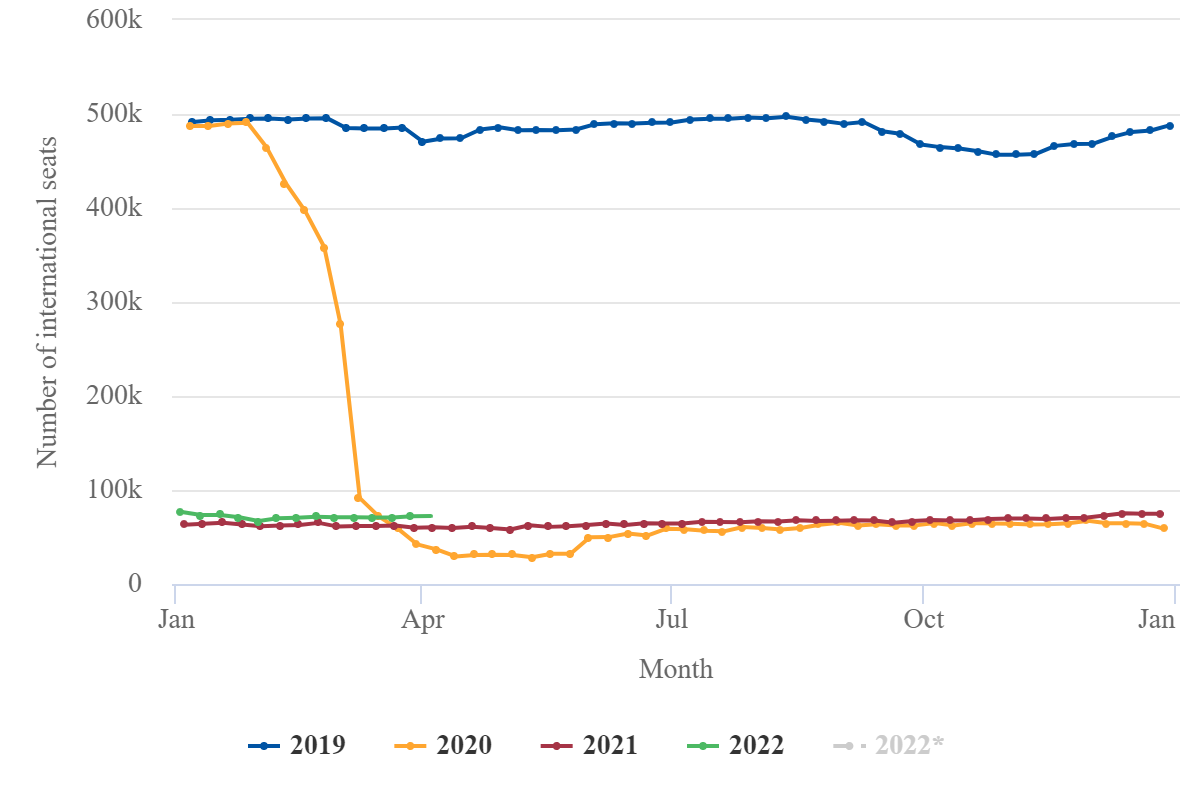 Korean Air said that it was seeing a small rebound in international demand from April onwards, after the rule changes come into effect. However, the airline said that it expected that meaningful recovery would only occur when the government drops arrival testing, and when the number of new daily COVID-19 cases falls to a more stable level.

There could still be some gains, though.

While the airline is not adding much international capacity back immediately, it does intend to add frequencies gradually and resume routes through the second quarter.

The CAPA fleet database shows that almost all of the airline's narrowbodies are operational, although the picture is different for the widebodies.

One of its 10 Airbus A380s is operational but with the rest parked, and about half of the passenger 747-8s are operational.

Naturally, all of the airline’s extensive freighter fleet is operational to take advantage of surging freight demand.

The Korean government’s move to ease quarantine rules is a major step in the right direction. This is a very familiar theme in the Asia Pacific region, as governments move at different rates to reopen international travel. Hopefully when the Omicron wave subsides further in South Korea, the government there will have more scope to loosen arrival testing requirements.

Korean Air is taking a sensible approach at the moment, growing where it can and pacing its capacity growth to demand expectations. The airline is actually coming through the pandemic period in better shape than many others in Asia Pacific. Korean was one of the first major airlines in the region to return to profitability.

This is in large part due to its large freighter fleet, which has been a massive advantage.

Looking further ahead, the airline should also have a good position in the post-pandemic period, thanks to its strong international hub and planned merger with its local rival Asiana.