South African Airlines will spell out its future in a strategic plan to be presented to the South African Government in early Apr-2013. But history suggests that implementation of a new strategy is far from assured at the carrier which suffers from extensive government meddling.

A new CEO is also expected to be appointed by the end of Mar-2013, replacing Siza Mzimela who resigned, along with several top executives in Oct-2012 in the wake of a mass board resignation the previous month, citing a “breakdown in the relationship with the shareholder”, testifying to the deep divisions between management.

Details are emerging of what led to those events, with media reports suggesting a decision by Minister of Public Enterprises, Malusi Gigaba, to block a ZAR10 billion (USD1.08 billion) decision to purchase a fleet of A350 aircraft to replace the carrier’s A340-600s was at the centre of the falling out between the board and management.

Meanwhile SAA survives on the basis of a ZAR5 billion (USD540 million) government guarantee granted on 02-Oct-2012 for a two year period effective 01-Sep-2012. The guarantee is intended to enable SAA to borrow on the financial markets and remain solvent.

The Mail & Guardian reported that SAA’s fleet committee recommended the A350 over the Boeing 787 to the board in late Aug-2012 as a replacement for the long-haul A340-600 fleet.

SAA had issued requests for proposals (RFPs) to both Airbus and Boeing in Jun-2012 for new widebody aircraft, to replace older aircraft and grow the long-haul fleet from 24 to 31, allowing the carrier to respond to competitors and meet demand. SAA did not publicly disclose details of its aircraft requirements at the time.

The more fuel efficient next generation A350 was reportedly chosen to replace SAA’s A340-600 fleet of which the carrier has nine. Of those, three are on lease from International Lease Finance Corporation. SAA also has another nine A340-200 and -300 variants.

Acquiring the A350 fleet was considered the key to the previous board’s turnaround strategy.

Mr Gigaba blocked the deal when the board presented details of the plan, with his office reportedly “quite shocked that the process had progressed so far”.

The Department of Public Enterprises defended the decision to block the deal, saying that Mr Gigaba was not aware of the board’s decision to order the A350 and he was concerned that his department had not been presented with a long-term strategy by the carrier supporting the fleet renewal programme.

The delay in placing the order has resulted in SAA losing its production slots at Airbus leading to a potential delivery delay of up to a year. The 350-seat A350 is scheduled to enter service in 2017 promising 25% lower operating costs than similar sized aircraft.

SAA attributed persistently high fuel costs as a key reason for the group reporting a ZAR1.32 billion (USD142.5 million) operating loss for the financial year to 31-Mar-2012, down from a restated ZAR1 billion (USD108 million) profit in FY2011. Over the last 10 years, the airline has made cumulative losses of ZAR14.7 billion (USD1.65 billion).

SAA has also decided to renegotiate a USD910 million purchase agreement made in 2002 for 20 A320s to reclaim pre-delivery payments from Airbus by reportedly transferring the order to a lease agreement by the end of Mar-2013. The A320 will replace older Boeing 737-800s giving SAA an all-Airbus passenger fleet. The aircraft will be delivered through to 2017.

The lack of capital to purchase additional aircraft presents a major challenge for the airline, as its African and Middle East competitors, especially Emirates, rapidly expand their widebody fleets and are increasingly looking for opportunities in African markets, including Southern Africa. 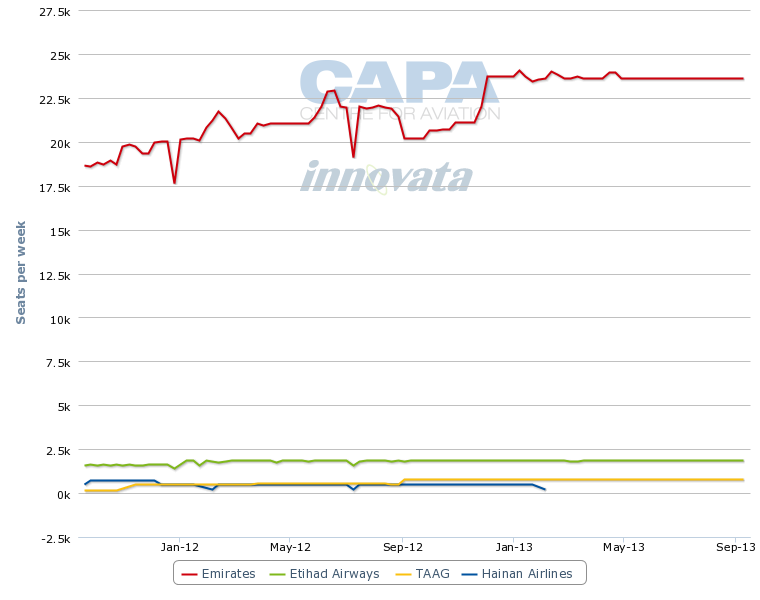 CEO of SAA LCC subsidiary Mango, Nico Bezuidenhout, was installed as interim CEO, the third head of the company since 2009, after acting CEO Vuisili Kona was suspended in Feb-2013 while “certain allegations that have come to the attention of the board” were investigated. Mr Gigaba finally removed Mr Kano from the board on 11-Mar-2013.

Mr Kona was appointed on 28-Sep-2012, originally as chairman, replacing Cheryl Carolus, then adding the role of acting CEO when Ms Mzimela resigned. He relinquished the chairmanship to Dudu Myeni after the board expressed their concerns to Mr Gigaba that the combined role of chairman and CEO was not good governance practice.

Mr Bezuidenhout had been leading the committee charged with developing a strategic plan to support the case for the ZAR5 billion of state support. He is also among five candidates put forward by the board to Mr Gigaba.

The draft plan is expected to be presented on 1-Apr-2013. Mr Bezuidenhout said in Feb-2013 that the turnaround strategy would include a review of the airline's routes and fleet. "If we have the wrong tools for the job, we're not going to make it. Our long-haul fleet will not be profitable unless we adapt and change our fleet," Mr Bezuidenhout reportedly said.

SAA has repeatedly had to ask its government owner for assistance over the last several years as multiple restructuring attempts have failed. But, faced with repeated government reluctance to support substantial restructuring of the company, it is hard to see any new moves achieving more than a temporary respite.

The requests for state support are also controversial as they distort the playing field of what is supposedly a deregulated market. However, the government in Feb-2013 dismissed concerns that the support funding was detrimental to private airlines like Comair and its subsidiary Kulula Air, claiming the market was “very competitive”.

SAA still dominates the domestic market with its main brand supported by subsidiary LCC Mango, and regional network provider SA Express and is pursuing a strategy of targeting regional expansion throughout southern and central Africa. This has seen the addition of six new destinations added to the network – Ndola, Kigali, Bujumbura, Pointe Noire, Cotonou and most recently, Brazzaville – extending SAA's African coverage to 38 regional destinations.

The strategy, adopted in 2011 after nearly a year of restructuring, was aimed at allowing SAA to tap mineral rich and developing markets across Africa and take on competition from Middle Eastern carriers targeting the continent. Regional expansion appears to have borne some fruit, with African passenger numbers growing 11% in the fiscal year ending 31-Mar-2012.

However, difficulties in securing more favourable bilateral rights with other, often protectionist, African states are restricting SAA’s regional growth aspirations. SAA needs a larger African network to offset declines in Europe, where in recent years it has steadily been shrinking in size. 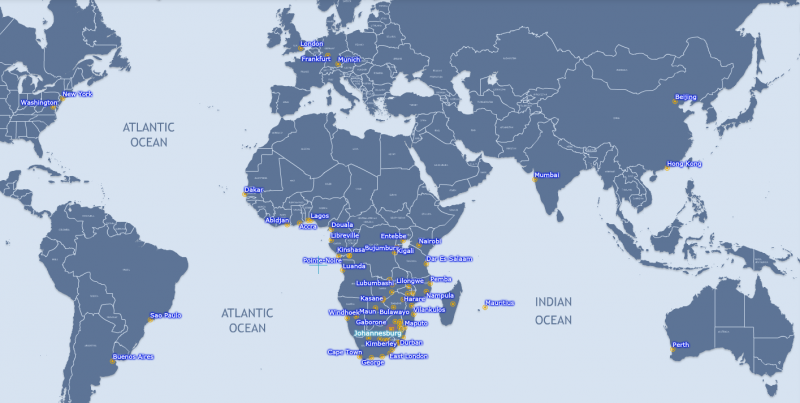 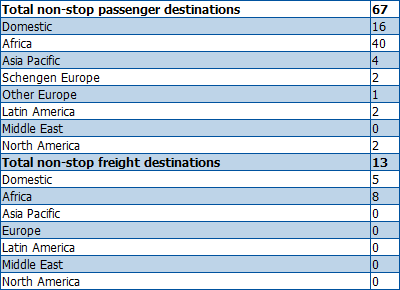 SAA pulled off the Cape Town-London Heathrow route in Aug-2012 after more than 20 years of operation, citing competitive pressure and falling demand. The UK is still South Africa’s largest travel market outside of the African continent with more than 400,000 tourists per year, but their number has dropped 24% over the past three years.

Apart from adding some capacity to its double-daily Johannesburg-London Heathrow services by up-gauging equipment, SAA is deploying some of the spare long-haul capacity to healthier medium-haul markets in Africa, including Abidjan and Accra. It also plans to increase capacity on well performing long-haul destinations in the Asia-Pacific region, including Mumbai and Perth. Three-times weekly Beijing services were launched in Jan-2012 as part of SAA's increased focus on Asia. 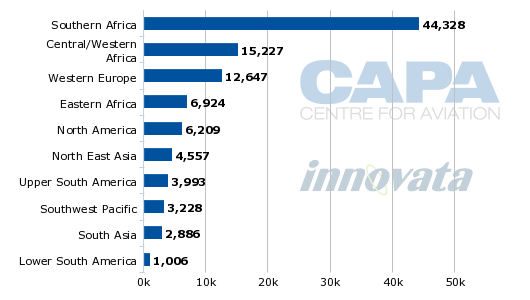 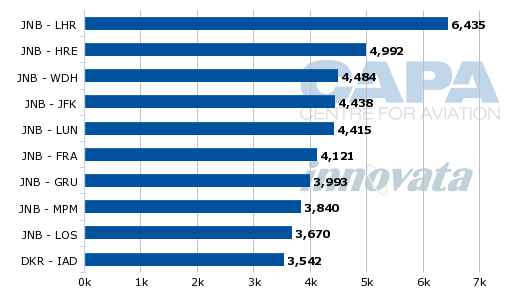 A new competitor in the form of London-listed start-up fastjet is closing in on securing a deal to takeover defunct South African domestic LCC 1time which is likely to bring to an end a short reprieve from competitive pressures for all South African carriers.

1time was placed in provisional liquidation on 11-Dec-2012. fastjet has offered to buy the assets of 1time for ZAR1 (USD0.11c) and operate domestic services between South Africa’s main cities of Johannesburg, Cape Town, Durban, Port Elizabeth and East London.

SAA, Mango and Comair objected to fastjet’s bid to relaunch 1time under the fastjet brand on the basis that fastjet did not comply with the 75% South African ownership requirement to operate domestic services.

fastjet has consequently abandoned its application to the South African Minister of Transport for an exemption to the rule and has instead obtained South African partners to comply with the ownership restrictions. The carrier has filed a letter of intent with the 1time’s liquidators, enabling them to negotiate a compromise settlement with creditors.

1time had about 15% of the South African market before it was placed in provisional liquidation.

The benefits of less competition are apparent in Comair’s listed results with the carrier reporting a tax-paid profit of ZAR79.1 million (USD8.9 million) for the first six months to Dec-2012, turning around a ZAR34.2 million (USD3.9 million) loss for the same period in 2011. The result was achieved on 20% revenue growth to ZAR2.42 billion (USD273,000) largely due to fuel surcharges on British Airways' services and improved yield management on LCC subsidiary Kulula Air, despite reduced domestic demand, according to the carrier.

An indication of how demand has evaporated can be seen at South Africa’s two biggest airports, Cape Town and Johannesburg Oliver R Tambo, which recorded domestic passenger reductions of 4.8% and 8.9% respectively year-on-year for Jan-2013. Overall traffic numbers were 5.6% down to 701,881 at Cape Town and 3.6% at Johannesburg to 1.5 million.

The reduction is at least partly due to reduced domestic competition, helping the remaining airlines' bottom lines. Domestic capacity has reduced by about 32,000 return seats per week to about 323,000 over the past 12 months, largely due to the demise of Velvet Sky and 1time. 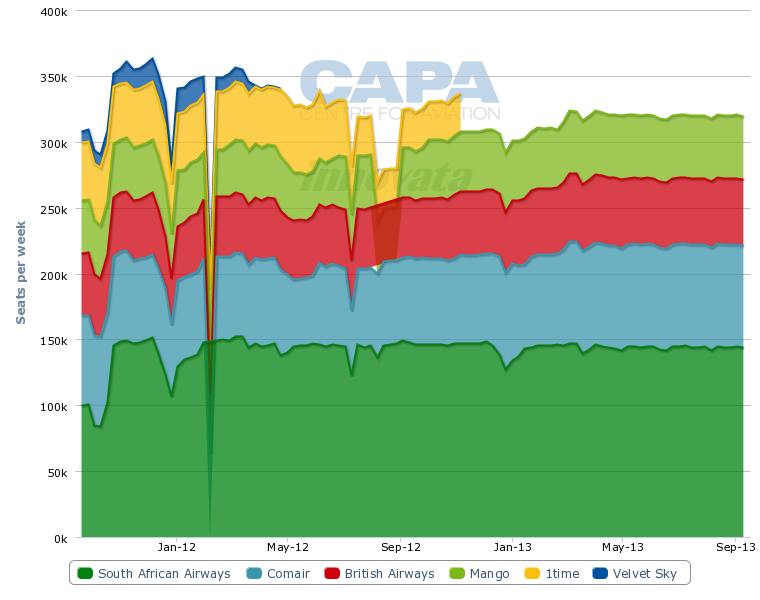 Mr Bezuidenhout plans to expand Mango in 2013 taking advantage of Africa’s 5% overall economic growth forecast, well above the global average. He also pins his hopes on the “progressive realisation of the Yamoussoukro Declaration” (YD) creating open skies across the continent to accelerate Mango’s growth beyond South Africa. There has, however, been little progress in liberalising African airspace since the YD was ratified by the majority of African states in 2002.

With fastjet well in its sights, Mango is considering several new routes, particularly to East Africa over the next 18 months, in a strategy similar to that of fastjet's which aims to be a pan-African LCC, in part through the rebranding of its Fly540 operations in Ghana and Angola.

A new SAA will walk into a political quagmire, despite management skills

The process of appointing SAA’s CEO is utterly embroiled in politics and it appears likely that Mr Bezuidenhout will be one of the few well-qualified leaders that the airline needs. The question remains whether he will be given sufficient rein to implement his strategic plan, or will he be required to toe the government line.

Minister Gigaba has reiterated the government’s interventionist style, reportedly saying in Feb-2013 that he will not hesitate to intervene again if management does not deliver.

This approach gives little confidence that a new leadership will be given the mandate to implement any strategic plan calling for the massive restructuring that is so necessary to stem losses. History also does not bode well; over the years, nine restructuring plans have been presented to the government. None has been implemented. But, with market competition intensifying, this may be the last throw of the dice for SAA.