US airlines see some signs of improvement, but cautious optimism entering Winter

US carriers’ Nov-2009 traffic results painted an improved picture after the carnage of the past 12 months, with yield and load factor improvements among the major US airlines, due to careful capacity management and a gradual pick-up in air travel demand (both leisure and business).

Southwest trumps JetBlue, US Airways and Continental in the yield growth stakes

Southwest reported a double-digit yield improvement in Nov-2009, with JetBlue and US Airways reporting on small yield reductions. Continental Airlines, however, continued to feel the effects of the challenging operating environment, with continued (systemwide) PRASM and RASM reductions in the month.

During 3Q2009, Southwest’s passenger yields, while slipping 12.0% to USD 12.94 (as discounting activity reduced the average passenger fare by 8.4% to USD113.95), were higher than the other LCCs, and even some of the network carriers, which continue to struggle on trans-Atlantic and Pacific markets. 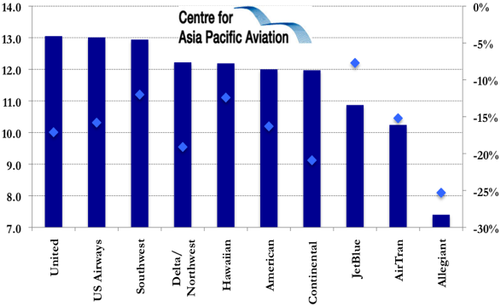 All but two of the eight US majors (with the exception of Delta and US Airways) reported load factor improvements in Nov-2009, reflecting continued capacity reductions by the majority of the carriers and signs of underlying improvements in demand as the US economy recovers.

Only AirTran, JetBlue and Allegiant on the growth path

JetBlue and AirTran were the only two carriers among the majors growing capacity in the month, while Allegiant stood out among the smaller carriers, with its continued expansionist strategy, which saw the carrier increase scheduled service capacity by 25%.

Overall, the six largest US carriers reported their best traffic results in Nov-2009 of the past 18 months, with smaller traffic reductions in the domestic market.

The carriers also benefited from the timing of Thanksgiving, which fell entirely in November this year, compared to November/December in 2008.

Southwest, the largest US LCC, stated it expects passenger revenue per ASM to have increased in the 12% range in Nov-2009 – for the third consecutive month of increases and the first month this year of double-digit improvements - thanks to notable capacity cut (-7.7% year-on-year) during the month. 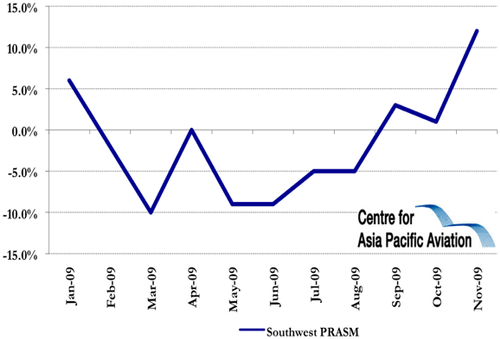 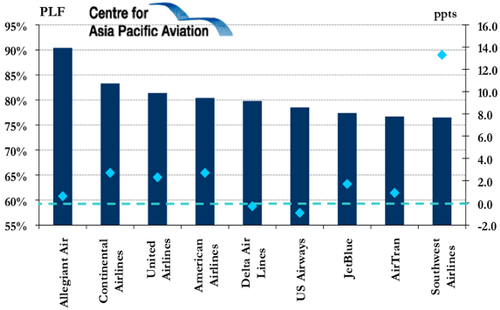 America’s full service airlines have pared back capacity so much that they are now consistently operating with higher load factors than their LCC competitors. 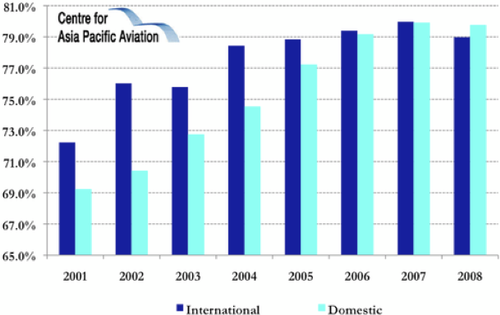 Conversely, the smaller LCCs would be relishing the cutbacks by larger rivals, as it provides more expansion opportunities at the start of a growth cycle.

JetBlue reported a 1% reduction in passenger revenue per available seat mile (PRASM) for the month (off last year’s positive base), the smallest yield contraction in seven months.

Continental Airlines reported an encouraging set of traffic results for November, with record mainline load factors, smaller falls in yields and an improving cash outlook, reflecting a steady improvement in the US airline operating environment.

In Nov-2009, Continental recorded a consolidated traffic (RPM) increase of 2.9% and a capacity decrease (ASM) of 1.2% year-on-year. Consolidated (mainline plus regional) load factor reached 80.5%, up 3.2 ppts year-on-year and the airline achieved a record mainline load factor of 81.1%, up 3.3 points. 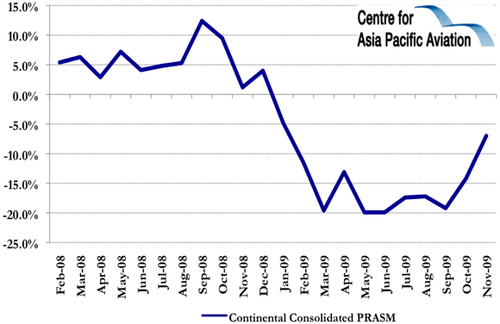 Furthermore, Continental stated it anticipates ending 2009 with an unrestricted cash, cash equivalents and short-term investments balance of approximately USD2.5 billion – an improvement from the USD2.4 billion estimated as part of its third quarter earnings announcement on 21-Oct-2009. Continental ended 3Q2009 with an unrestricted cash balance of approximately USD2.55 billion, down from USD2.77 billion at 30-Jun-2009.

US Airways President, Scott Kirby, stated that the carrier’s Nov-2009 consolidated (mainline and Express) passenger revenue per available seat mile (PRASM) decreased by approximately 2%, a notable improvement from the 10% reduction in the previous month.

Total revenue per ASM was flat on a year-on-basis, for the first month of positive growth since 2008. In Oct-2009, RASM decreased by approximately 9%.

Mr Kirby added that the revenue environment “continues to show core sequential improvement with strength in close-in bookings. Additionally, both booked yields and corporate revenue are now up on a year-over-year basis.” 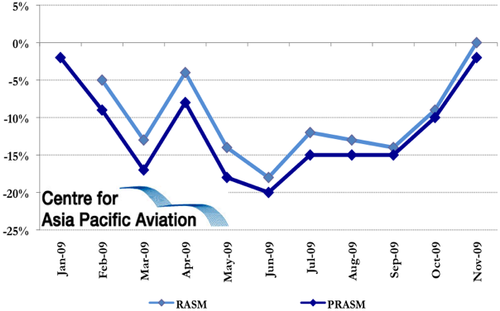 Also in the month, US Airways reported a 4.7% domestic traffic (RPMs) reduction, as the carrier reduced domestic capacity (ASMs) by 3.5%, resulting in a 0.9 ppt load factor reduction to 78.5%.

AirTran’s traffic (RPMs) growth in the month was among the highest in the US domestic market, only exceeded by Allegiant and Southwest Airlines. JetBlue also increased traffic notably in the month, indicating the LCCs are taking advantage of growth opportunities in the market. 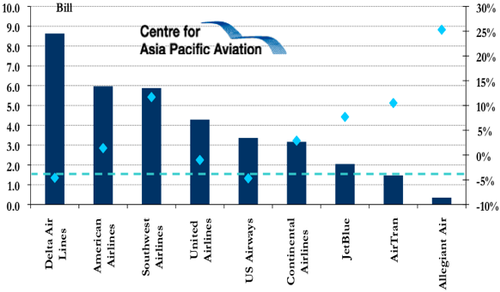 Allegiant, which has been robust throughout the global economic slowdown, saw its system passenger load factor slip for the sixth consecutive month in Nov-2009 (down 0.5 ppts), although it remains above 85% (at to 86.5%) and scheduled load factors exceeded 90% for the first November in the carrier’s history (at 90.4%). 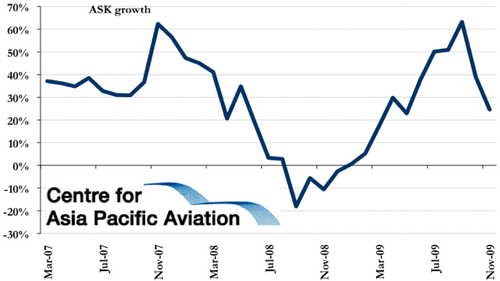 This increase, which is lower than the capacity additions over the past few months, comes at a time when the majority of US carriers are reducing capacity or only increasing capacity by single-digit levels. 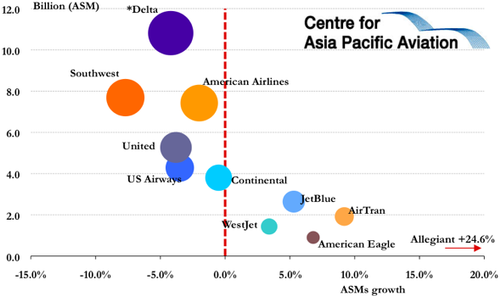 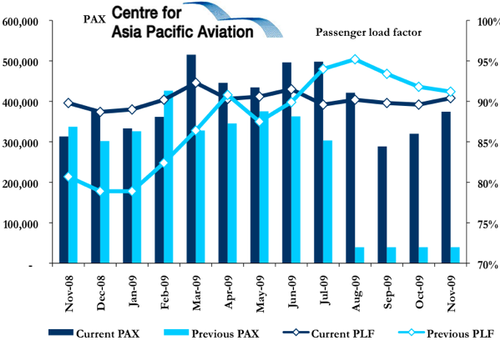 Rapid expansion while others contract

Republic Airways reported a more than doubling in traffic (RPMs) in Nov-2009, largely arising form the company’s recent acquisitions of Frontier Airlines and Midwest Airlines on 01-Oct-2009 and 01-Aug-2009, respectively.

Challenges remain ahead of the seasonally weak Winter period

According to ATA, 2009 capacity reductions by US airlines have been the deepest since 1942. This extreme capacity control, combined with opportunistic capital raising exercises, have helped position the US airlines to survive the tough Winter that lies ahead.

This strict capacity management has also meant that US airlines are operating at near record load factors, which is partially making up for reduced air fares, although there are signs that yields are now starting a slow recovery.

A sustainable recovery in the US air travel industry is, however, heavily reliant on continued economic improvement, especially for premium travel.

ATA President and CEO, James C May, recently commented that it is “increasingly apparent that the economic head winds facing the airlines and their customers are anything but behind us”.

Mr May also warned that “while other sectors may be seeing signs that the economy is getting back on track, the airline industry has faced challenges in its effort to generate revenue”.

This commentary may begin to become more optimistic in coming months, as evidence builds of a recovery.