As China Southern nears 18 months since taking delivery of its first A380, the carrier has yet to receive authority to operate its full fleet on viable services, creating a quiet debacle for Chinese aviation. Losses from the mere three A380s China Southern had in 1H2012 amounted to a figure the carrier would quantify only as less than RMB100 million (USD16 million).

Full year 2012 losses for the A380 fleet, now at four aircraft, are reported to be between RMB150-200 million (USD24-32 million). The high sums come despite Chinese carriers being traditionally stronger in the second half as well as China Southern launching the A380 between Guangzhou and Los Angeles in Oct-2012.

Plans announced in Aug-2012 for China Southern to cooperate with Air China by deploying the A380 between Beijing and Paris were dragged out by Air China and China Southern working through the details and finally the SkyTeam alliance, of which China Southern is a member, reportedly raising concerns about the cooperation. Although the concerns are unspecified, China Southern operates a joint venture with SkyTeam members Air France and KLM, suggesting the A380 operation would be conducted outside of that venture. As China Southern prepares to take its fifth and final A380 – adding further financial burdens – the carrier is being tested between profitability, national allegiance and international cooperation.

China Southern affected by 'one airline, one route' policy

China operates its long-haul network under a de facto one airline, one route policy that generally limits city-pairs to one operator: Air China is the only Chinese carrier between Beijing and New York; China Eastern the only one between Shanghai and Los Angeles and China Southern the only one between Guangzhou and Paris. There are exceptions, notably for Air China. Although the so-called "Big Three" – Air China, China Eastern and China Southern – are all state-owned, Air China is the flagship, and being based in Beijing and with its former chairman Li Jiaxiang the chairman of aviation regulator CAAC, Air China enjoys certain privileges.

Air China operates alongside China Eastern from Shanghai to Frankfurt, Paris and Sydney. China Eastern, however, is not permitted to operate alongside Air China from Beijing. Additionally, Hainan Airlines is permitted to operate alongside Air China between Beijing and Moscow (Air China has a daily flight, Hainan thrice-weekly while Aeroflot is double daily and has services to Guangzhou and Shanghai). Air China is the largest international operator at Beijing Capital. 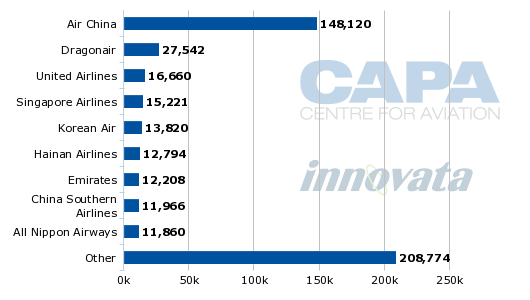 China Southern's primary hub is at Guangzhou in southern China and has significantly smaller high-yielding and O&D traffic compared to Beijing and Shanghai: Beijing is the seat of government while Shanghai is the financial capital. China Southern is the largest international operator at Guangzhou, which is also its largest hub for domestic and international services. China Southern has a hub in Beijing (as well as Urumqi), but any international routes from Beijing must not conflict with Air China. 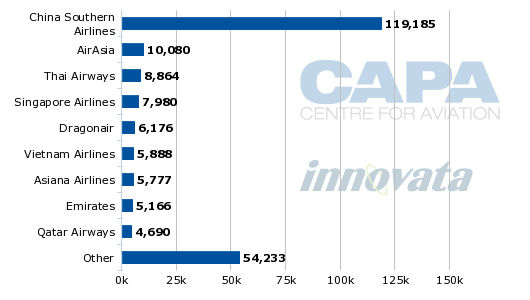 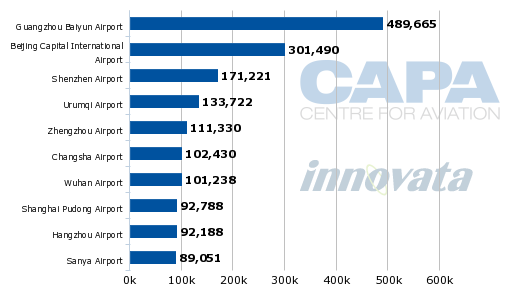 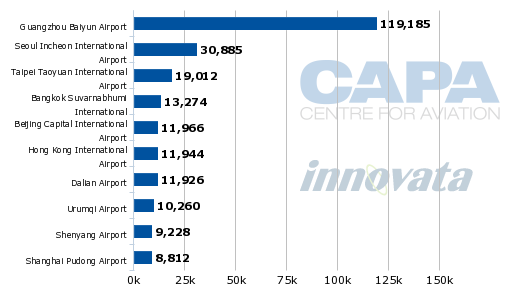 The policy limiting competition is understood to be grounded in a philosophy that Chinese carriers should compete with international carriers before competing among themselves. Chinese carriers have traditionally lagged behind peers in terms of capacity and service, so reducing competition in theory reduces challenges and enables the Chinese carriers to accelerate their development – which by most measures is proceeding quickly: new aircraft typically feature globally competitive hard products, soft service is improving (China Southern has noted it has increased catering spending) and facilities are being improved for transit passengers while the government supports visa-free transits.

The crux becomes the juxtaposition of routes being restricted, yet China Southern was permitted to order the A380 (the government must approve all aircraft purchases). China Southern received its first A380 in Oct-2011 but the aircraft was confined to domestic routes as typically closed-door route negotiations took place, with this occurring also in an atmosphere of increased scrutiny on pilot training, reportedly following incidents.

A breakthrough came in Jul-2012 when China Southern announced it would move the A380 out of domestic and Hong Kong routes and into long-haul markets by replacing the 777-200 between Guangzhou and Los Angeles with the A380 from Oct-2012. In Aug-2012 China Southern announced an agreement with Air China in which the two would cooperate on A380 services between Beijing and Paris, although details at the time were still pending.

The restriction has seen some creative work-arounds: Hainan Airlines has acquired a stake in French short-haul operator Aigle Azur and will give the carrier A330s to fly between Paris and Beijing, which in theory is permissible on a French AOC but not a Chinese AOC that would compete with Air China.

Spring Airlines is due to establish a Japanese subsidiary to fly from Japan to cities in China that it could not operate on its Chinese AOC. There are other opportunities too, such as domestic services and international flights from Japan to other countries besides China.

SkyTeam raises questions as, six months after cooperation announcement, no progress to show

The wet-lease arrangement would suggest Air China would withdraw its own capacity between Beijing and Paris. Air China in northern summer intends to link Beijing and Paris with a daily service on the 777-300ER, which typically seats 311 in a three-class configuration. China Southern's A380 is configured in a three-class configuration seating 506, a 63% increase in capacity over the 777-300ER.

As 2012 progressed and Air China and China Southern worked through the details, it appeared they were reaching an agreeable outcome – but then hit a snag with SkyTeam. China Southern is a member of SkyTeam while Air China is a member of Star Alliance. Conflicting and confusing local media reports either blamed or vindicated SkyTeam for the A380 cooperation delay. SkyTeam, however, tells CAPA:

"The purpose of our airline alliance is to augment cooperation between its members around the world. SkyTeam recognizes that in certain instances, bilateral cooperation with airlines outside the SkyTeam alliance may be necessary. SkyTeam is aware of a potential partnership between our member, China Southern, and Air China on one route. In principle, our members are in agreement with this cooperation. However, additional detailed information, including a timescale, is required before SkyTeam can support it."

SkyTeam was unable to elaborate on the information it required, but a reference to "timescale" could indicate the alliance does not want to see the Air China-China Southern cooperation be a medium-term or long-term reality. That would likely conflict with the alliance's two anchor members, Air France and KLM (the two provide management support to the alliance), and with whom China Southern has joint ventures. 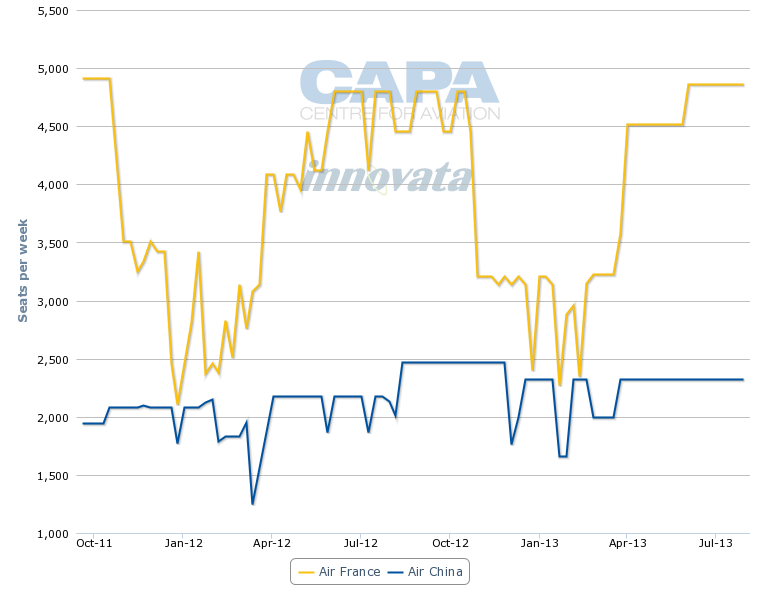 China Southern and Air France commenced a joint venture in Nov-2010 covering Guangzhou-Paris flights, which they both operate. The JV includes revenue sharing. The management committee, according to a statement from the time, would establish "five working groups in charge of implementing the joint venture agreements in the fields of network management, revenue management, sales, products and finance."

The cooperation dates back to 2003 when the two carriers signed a reciprocal codeshare agreement for Guangzhou-Paris effective 2004. The JV initially gave greater scale: by codesharing on Air France's three-weekly A340 flights and China Southern's four-weekly 777-200 flights, they offered a combined daily service. Over northern summer 2013 they will each have a daily flight, a 777-200 for Air France and A330-200 (including improved interior) for China Southern. 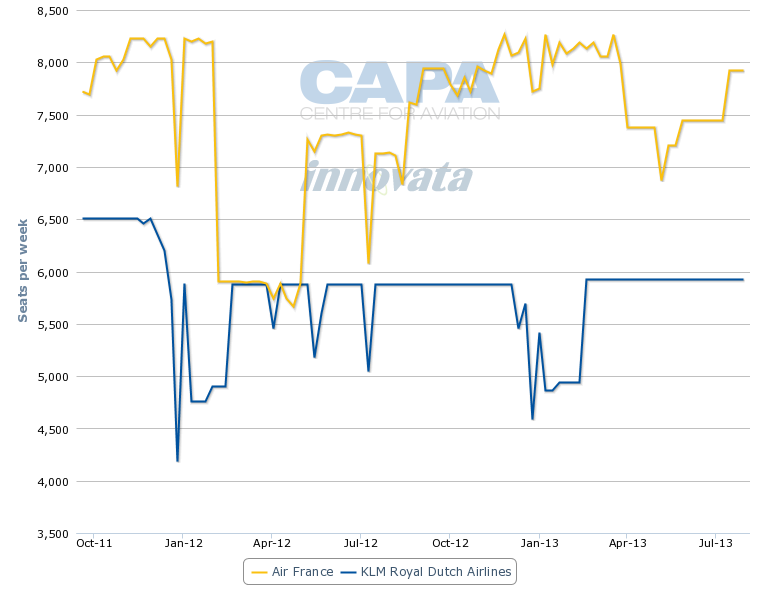 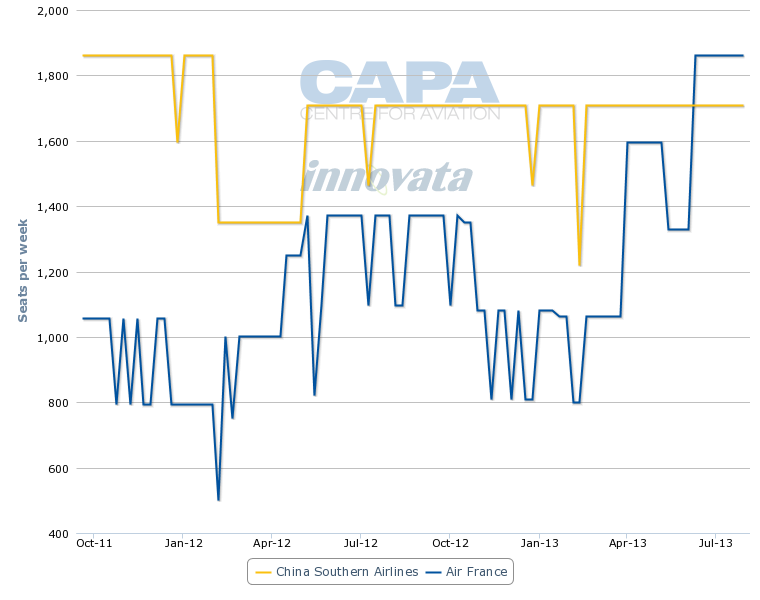 SkyTeam's mention of a timescale indicates that it may be taking a long-term view of its support for China's growth and potential and so is willing to tolerate this challenge to its members' JVs – but not for a long period of time. China will need to relax its one route, one airline policy, but the timescale on that is vague.

China Southern becomes uncomfortably stuck in the middle. The carrier needs to reduce losses from its A380 operation – a profit seems an increasingly distant goal – yet has deep cooperations with international partners. Besides the AF-KLM JVs, KLM in particular has helped China Southern spool up its sixth freedom operation by sharing knowledge and expertise while the SkyTeam alliance has invested heavily in improving the Chinese airport experience for passengers. China Southern in 2008 signed a cargo JV with AF-KLM, but this was postponed in 2009 due to the weak freight environment. Finally, Air China and China Southern are state-owned but deep rivals – yet the government is encouraging them to band together for the A380 in the greater cause of China.

A resolution to China Southern's A380 debacle will only lessen ill feelings; no circumstance will see everyone walk away happy. China Southern has a stigma of being the lowest quality of the Big Three, but the exact origins of this are unknown - and the view is increasingly one of perception rather than reality as the carrier rapidly improves. China Southern's domestic yield increasingly indicates it is pulling ahead of this. Nonetheless, for Air China to forgo the brand and premium products it has invested significantly in and instead to use China Southern's A380, complete with the latter's branding and interior spec, is a step backwards – especially on a high-profile route like Beijing-Paris.

Meanwhile China Southern will not be able to claim the route as its own. Its flagship A380, which the carrier has marketed heavily and built an image around, will lose some standing.

A better outcome is for China to end the one airline, one route policy. This will appease most carriers except Air China, but a re-balance is now in order after years of policies favouring Air China at the expense of other carriers and China as a whole.

There will one day be a change, and the sooner the better. In hindsight the current A380 debacle, becoming something of an embarrassment, will become a blip in a hopefully more viable operating environment.

Part Two of this report, to be published later this week, will examine China Southern's current A380 operation of Guangzhou-Los Angeles and domestic routes, the losses incurred by the operation and other routes the A380 could be deployed on.