Skymark closes at highest level in more than five years

LCCs were mostly higher to start the month, following positive moves on major markets, boosted by a series of positive economic news out of the US, Asia and Europe.

Skymark Airlines gained 3.4% to JPY1037, its highest close since Mar-2005. As part of plans to launch international services and “contribute to the stability of the Japanese aviation industry”, the LCC announced plans to hire 470 ex-JAL workers, including 120 pilots.

European LCCs were mostly higher as wider European shares posted their biggest one-day gain in three months following positive economic data in the Europe, the US and China. The euro snapped a three-day fall against major currencies, trading at USD1.3183. Air Berlin (+6.0%), Norwegian (+3.0%) and Ryanair (+2.1%) led LCCs in the region higher. Air Berlin reversed recent declines and was the region's biggest gainer on news it is in discussions with Finnair about cooperating on feeder traffic.

US LCCs all close higher

US markets had a strong start to the month with all major indices higher following upbeat jobs data and news Washington may help stabilise financial issues across the pond. LCCs in the region all closed higher, led by GOL (+3.4%) and JetBlue (+2.4%).

Elsewhere, AirAsia’s (-2.6%) long-haul unit, AirAsia X confirmed plans to launch Kuala Lumpur-Christchurch service in Mar-2010 or Apr-2011. The long-haul LCC is expected to undercut existing fares by as much as 50% with the carrier stating it would offer the “cheapest international airfares New Zealand has seen”. 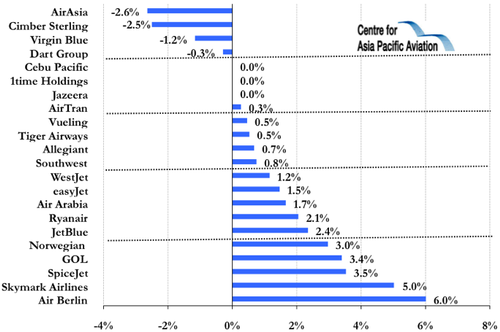