Singapore Airlines (SIA) has accelerated its network recovery after the Singapore government opened the country’s borders to international travel. This caused a notable spike in passenger capacity, although the airline was already on a long term growth path even before the government’s latest move.

Singapore has been a leader in re-establishing international air links. It first set up a system of bilateral air corridors over several months. That has been replaced with a broader reopening from 1-Apr-2022.

These steps are helpful to SIA as it looks to rebuild its network and traffic. Full recovery may still be some way off, but SIA has probably moved further in this regard than any of its rivals in the Asia-Pacific region. Capacity gains have in turn resulted in its active fleet moving closer to pre-pandemic levels.

Once again, Singapore provides a clear example of how government policy settings are the major factor in airline recovery trajectories at the moment. A significant caveat is that capacity is returning far faster than demand, but this will still put SIA in a good position when international demand does come back more strongly.

In Mar-2022 the Singapore government said it would allow all vaccinated travellers to enter Singapore quarantine-free. Pre-departure tests are still required, but not arrival tests. Transit to other points via the Singapore Changi hub is also allowed, as long as entry requirements are met for the destination country.

Singapore had established bilateral VTLs with more than 30 countries since Sept-2021, which allowed travel to resume with some important markets. Nearly 600,000 travellers entered Singapore under the VTL program, according to the Civil Aviation Authority of Singapore.

The new system is known as the Vaccinated Travel Framework. The government has kept the option of precluding travellers from countries that it places in its restricted category – although there are none currently with this status.

SIA has responded to the new framework by boosting capacity significantly.

These latest additions have elevated the SIA Group to 54.5% of its pre-pandemic weekly departures, and it goes without saying that this is a far higher level of international recovery than almost any other Asia-Pacific airline. 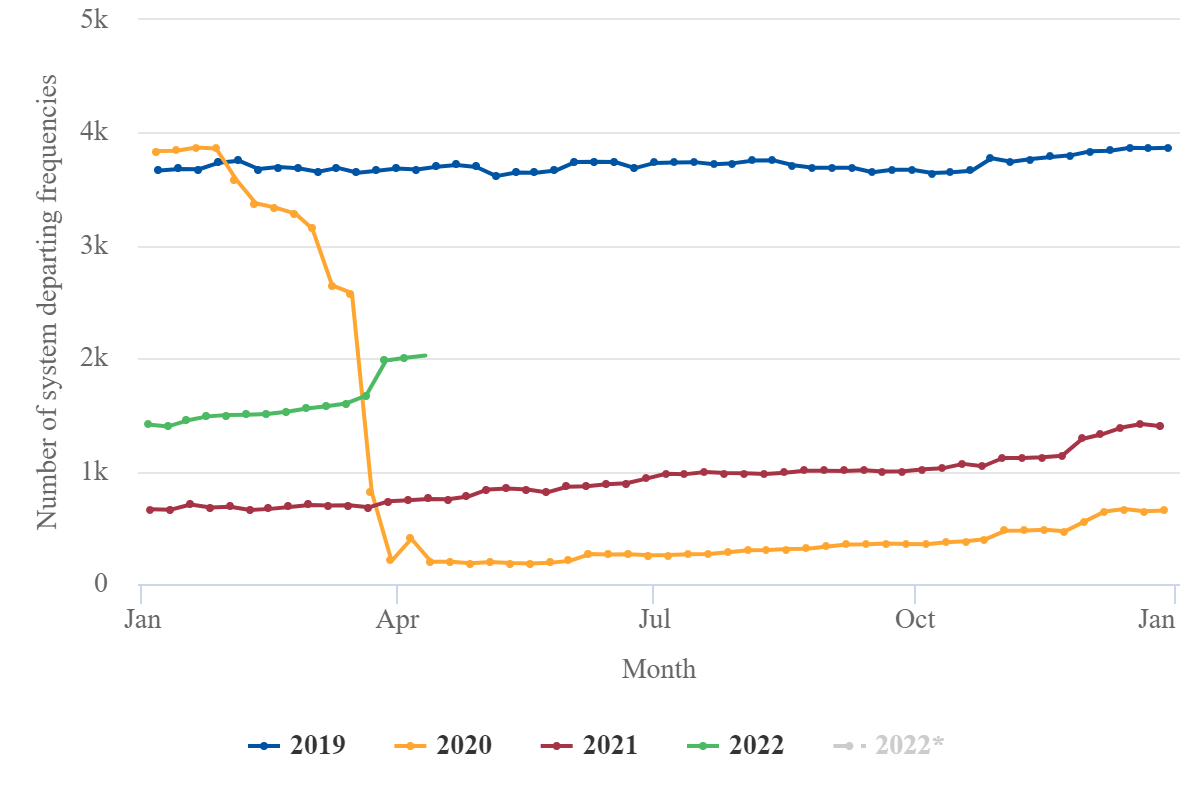 In terms of weekly seats, the SIA Group reached 56% of its 2019 level in the week of 4-Apr-2022. Among the group members, the increase was greater for the core Singapore Airlines than for the LCC Scoot.

The capacity and frequency increases so far this year have been exceeding traffic growth, however. 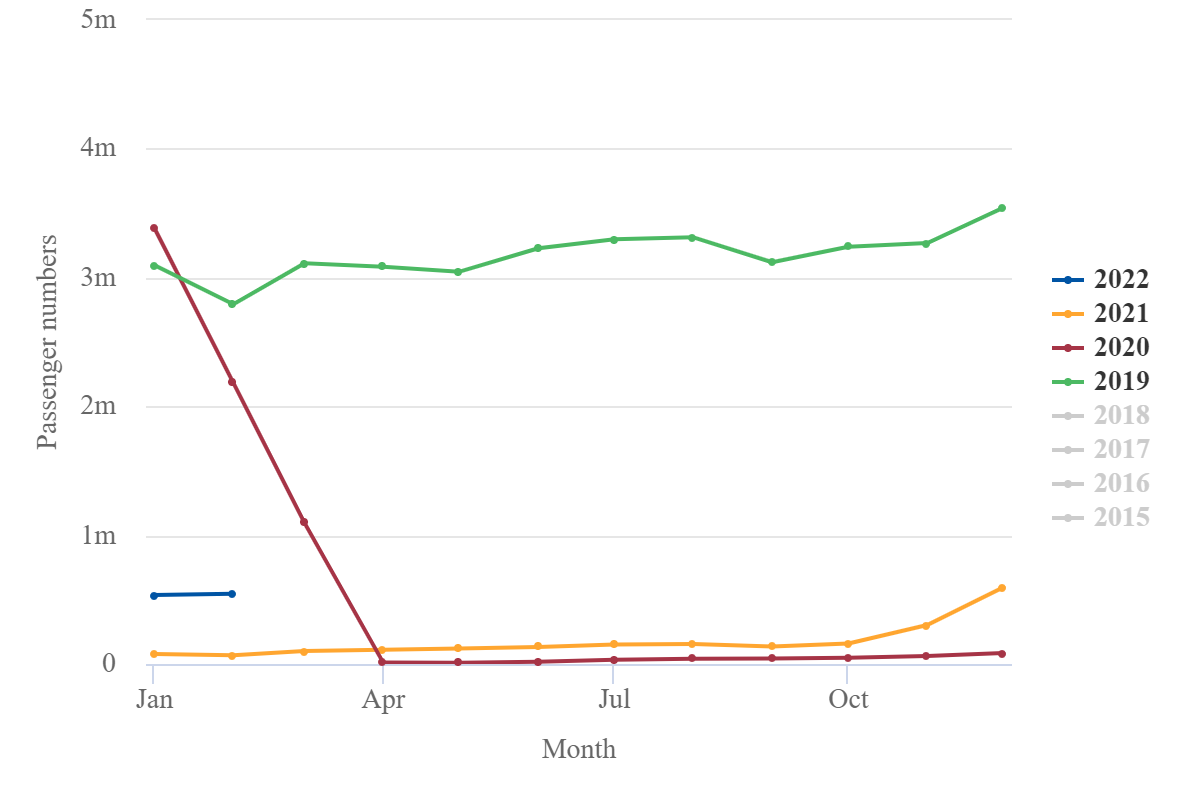 It is also worth noting that Singapore’s overall international capacity recovery has not been as swift as that of its flag carrier.

Singapore’s international capacity was at 40.1% of pre-pandemic levels for the week of 4-Apr-2022. This indicates that overseas-based airlines are not rebuilding Singapore routes as quickly as SIA.

Added flights are boosting frequency on some routes, while others are being resumed

So where are the extra SIA departures going to?

Some of the airline’s existing routes have seen increases in service, such as Sydney, Melbourne and Perth in Australia, London and other European destinations. Flights have also been added to certain Southeast Asian markets.

As well as these increases, SIA is restarting services on routes that have been suspended due to the pandemic.

Examples are flights to Newark in the US, Cairns and Darwin in Australia, Da Nang in Vietnam, Cebu in the Philippines, and Penang in Malaysia.

SIA has steadily rebuilt its fleet closer to pre-pandemic levels

SIA’s consistent network growth has allowed the airline to return more of its aircraft to service.

The SIA parent airline now has 121 aircraft in service and 14 inactive. This is very close to its operational fleet size in early Jan-2020, before the coronavirus pandemic struck.

At that point the airline had 124 aircraft in service and 11 inactive. However, since the start of the pandemic SIA has also absorbed some narrowbodies that were operated by its former subsidiary SilkAir, which was shut down. 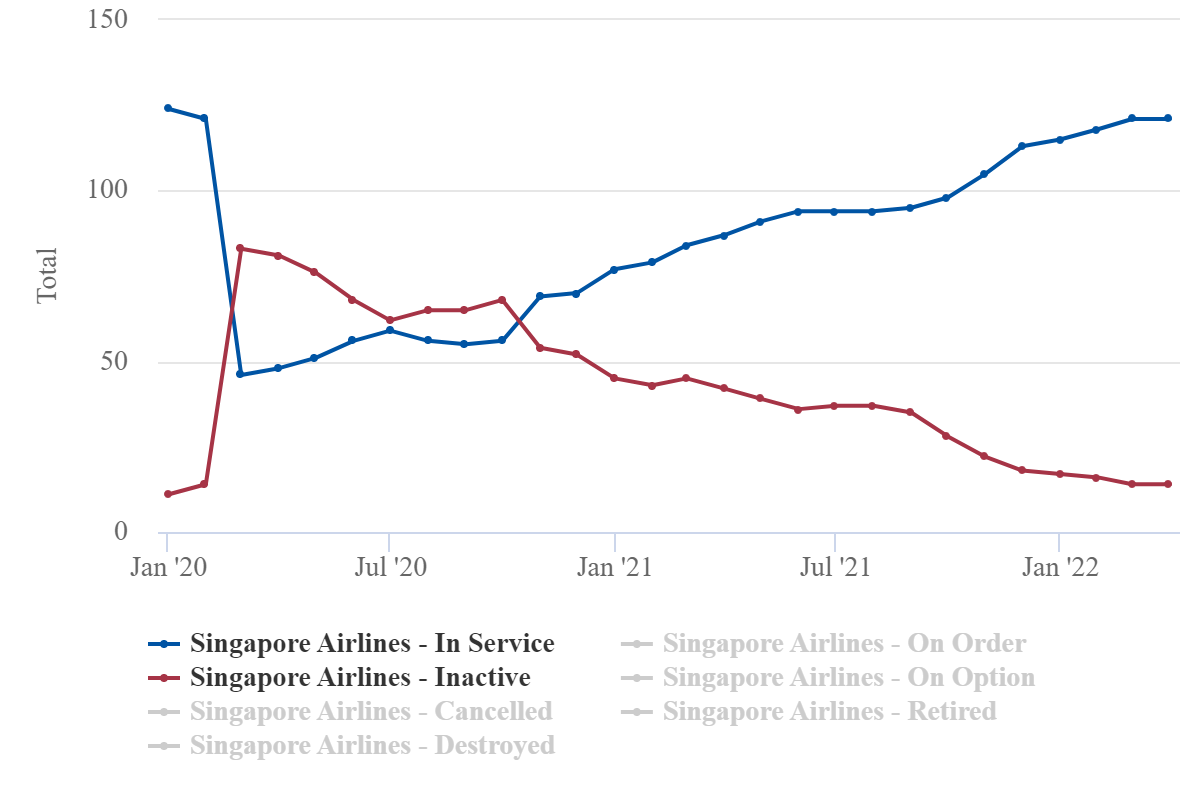 This compares to its pre-pandemic fleet of 49 aircraft. It now has a higher total number (active plus inactive) because it has also added some of the narrowbodies previously operated by SilkAir. 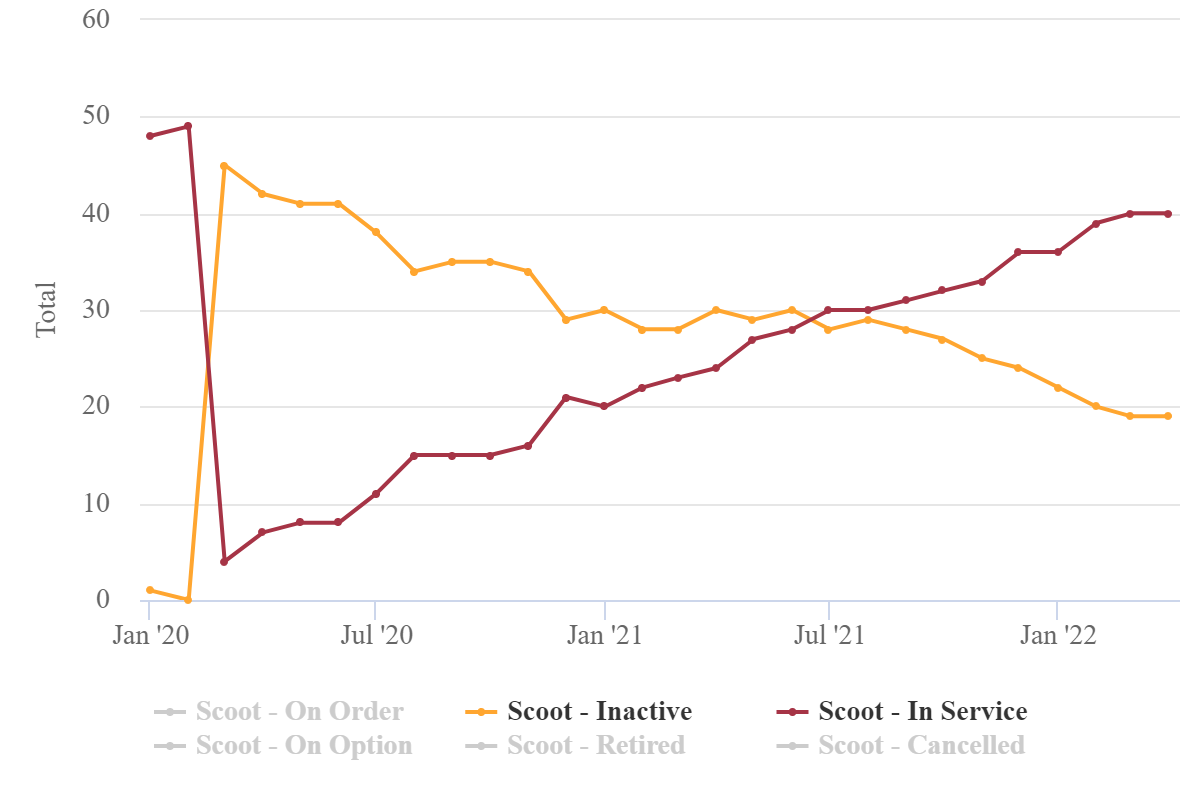 At this stage SIA is adding back flights faster than demand can keep up. This will affect the profitability of these routes, but SIA – like Qantas and others – has obviously determined that it is better to keep aircraft in the air than on the ground.

An aggressive approach to regrowth is a good move for SIA. It may cause some short term pain, but the airline will be able to re-establish its broad network relatively quickly.

Having a large number of spokes from its hub is vital for an airline like SIA that relies heavily on connecting traffic. And standing up its network and fleet will also mean it is ready when international demand recovery accelerates. This should happen over the remainder of 2022 as more countries relax travel restrictions and passenger confidence returns.

Other airlines have to be more cautious about resuming international routes. But SIA has a solid financial position that gives it substantial flexibility.

Having support from a government that is one of the most progressive in terms of reopening borders is also a big help. The Singapore government has long recognised the importance of the airline to the state’s economic progress.