Singapore is finally moving forward on plans to open a third runway as part of a new project aimed at making sure Changi Airport remains a leading hub for Southeast Asia. Changi over the last decade has seen a huge rise over aircraft movements driven by the rapid expansion of Singapore’s budget carrier sector. But this has led to congestion of the two existing runways at peak hours.

Changi handled 51 million passengers in 2012; it is currently able to handle 66 million passengers and is in the process of adding capacity within the current four-terminal site to handle 85 million passengers. But it is runway rather than terminal capacity which is by far the more pressing issue for Singapore. The third runway is not expected to open to commercial use until 2020, leaving Changi a challenging situation, as it is already turning away some airlines seeking slots for new services.

Changi looks to tap into growth in Southeast Asia

The potential for Changi is undoubtedly enormous as air travel in Southeast Asia continues to grow rapidly. Economic conditions in the region remain favourable, leading to buoyant medium and long-term forecasts for passenger growth to, from and within Southeast Asia.

Changi traditionally has relied heavily on long-haul connections, including Australia-Europe traffic. But the focus increasingly is more on regional connections – both for local traffic and the approximately 30% of its traffic which comes from transit passengers. About 46% of Changi’s seat capacity is now allocated to short-haul markets within Southeast Asia. 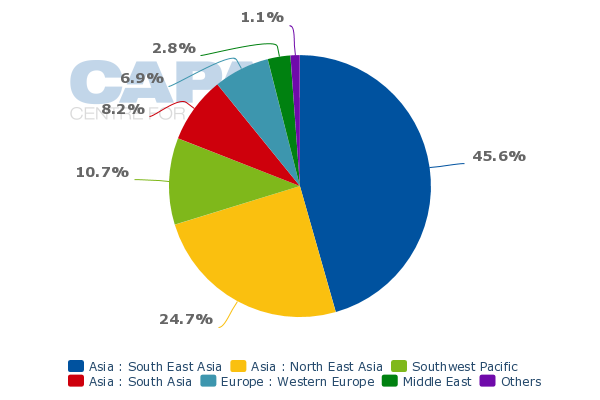 Singapore sees increasing competition for regional traffic and recognises it needs to invest significantly in airport development to retain its edge over rivals.

In an annual state of the union speech on 18-Aug-2013, Singapore prime minister Lee Hsien Loong announced plans for a fifth terminal and additional runway at Changi. Mr Lee said T5 would “double Changi Airport’s capacity” and “be completed by the mid-2020s”.

He said a fourth runway will be built at Changi East and dedicated for the military use while the current military runway, which is also on the east side of the airport, will be reallocated from military to commercial use. Paya Lebar, which preceded Changi as the country’s commercial airport and is now used by the military, will be closed as operations will be shifted to an expanded military area at Changi East.

More details on T5 and the shift of the current third runway from military to commercial use, which is expected to take place in 2020, will be released by Singapore’s Ministry of Transport over the next few weeks. Opening up Changi East to commercial use has long been seen as an inevitability but Singapore until earlier this year did not provide any indication it was ready to move forward with the highly anticipated project, which will require new taxiways and realignment of roads.

As Singapore waited to decide on the third runway, congestion on the existing two commercial runways has increased significantly. Long takeoff queues during peak hours were particularly experienced in 2012.

Queues over the last year have been reduced as Changi improved air traffic management and worked with airlines on schedule adjustments. But airlines have found it increasingly difficult to add new flights during the now relatively long morning and evening peak periods.

According to Innovata data, there are now at least 45 scheduled hourly movements at Changi during half of the day – 12 out of 24 hours. 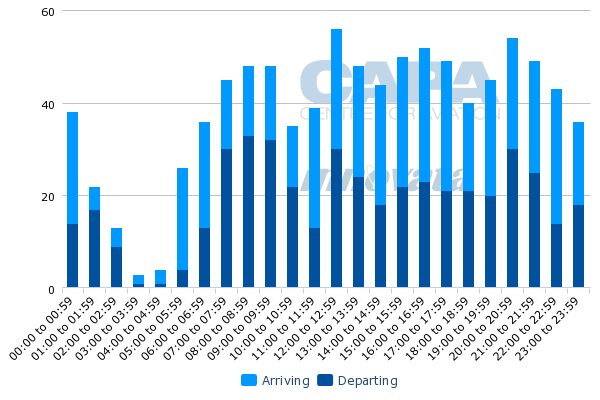 There is an unpublished ban on new turboprop flights, which has prevented Malaysia Airlines regional subsidiary Firefly from pursuing expansion at Changi. Narrowbody operators, including AirAsia, have also been unsuccessful in securing slots to add flights.

Some peak hour slots are still available. But Changi has been selective, generally accepting slots applications from new airlines if they offer a long-haul service or a new short/medium-haul route that is not currently served by another carrier. Network benefits are also considered, particularly in the case of Singapore Airlines and regional subsidiary SilkAir, which rely on transit passengers for about half their passengers. Changi is keen to maintain its position as a leading transit hub and recognises certain new routes or flights help make Singapore more competitive as a hub.

But airlines offering an existing point-to-point route with smaller aircraft have found it challenging to secure slots. They are generally encouraged to schedule their new flights at off peak times, but often such times are not commercially viable or do not match with their aircraft rotations.

A third runway should allow Singapore to readopt the more open policy it had for years which provided a warm welcome for airlines of all kinds. But with the third runway still seven years away, the runway congestion challenges will only get worse before they get better.

More Terminal capacity is needed, but not so urgently

Terminal congestion is not as pressing an issue although Changi’s existing terminals could become rather tight before T5 opens. When T5 and the new east side of the airport open, Changi will become a mega-airport similar to those in the works in the Middle East and at Istanbul.

The existing three terminals have a capacity of 66 million. Changi plans to break ground by the end of 2013 on T4, which will replace the Budget Terminal and have a capacity of 16 million when it opens in 2017. While T4 is expected to primarily accommodate budget carriers, which now use T1 and T2, it will offer aerobridges and full facilities.

T4 and the expansion of T1, both of which were initially announced in 2012, will increase Changi’s capacity by 19 million passengers. T1, Changi’s oldest terminal with current capacity for 21 million, underwent a major renovation project which was completed in mid-2012. The forthcoming new project at T1, known as Project Jewel, will redevelop the current open air car park into a mixed use complex with a basement car park, an expanded arrival hall and baggage claim areas and landside shopping mall.

The expanded arrival hall and baggage claim areas along with potential additional check-in desks will expand the capacity of T1 by an estimated 3 million passengers.

T4 and the expansion of T1 however are minor projects compared to the potentially gigantic T5. T4 will be Changi’s smallest terminal as there is limited space on the site of the former Budget Terminal (BT). Changi closed the BT in Sep-2012 and demolished it in early 2013, making room for T4. The BT had capacity for 7 million but was initially constructed with a modular design with the intention of facilitating expansion.

The decision to close the BT, which was mainly used by Singapore-based LCC group Tigerair as AirAsia and Jetstar have always used T1, was controversial as it led to a more congested T2 and temporarily reduced the total capacity of Changi. The BT had only opened in 2006. With a decision for T5 just around the corner, Changi could have potentially kept open the BT and waited for the opening of T5. T4 will only have capacity to handle 9 million more passengers compared to the BT – although Changi may need that extra capacity depending on how quickly T5 is built and how rapidly traffic grows over the next decade. 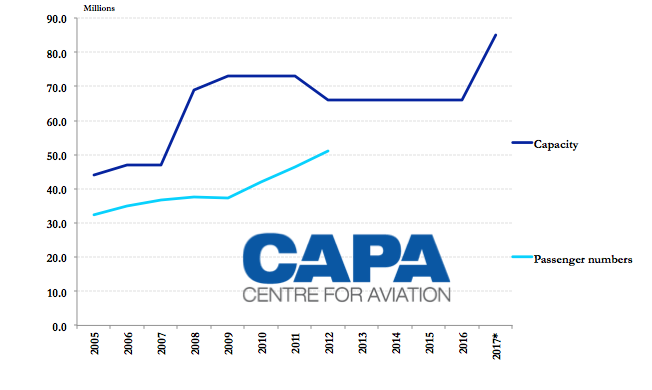 Prior to the BT’s close Changi already had capacity to handle 73 million. With passenger traffic passenger growth now starting to slow down after double-digit annual growth in 2010, 2011 and 2012, Changi may have had several years before it approached that figure. Changi reported only a 5% increase in passenger traffic for 1H2013 to 26.2 million. Traffic for the full year in 2013 will likely be around the 53 million mark. 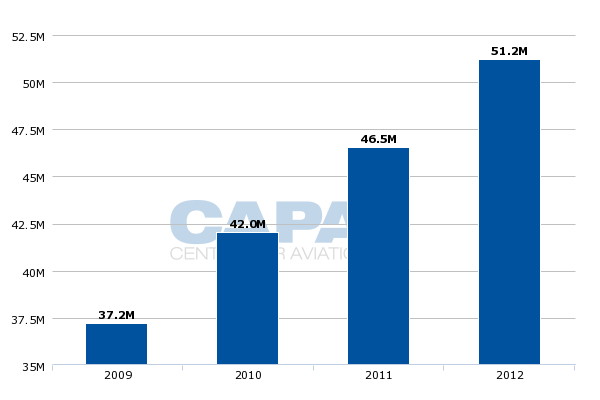 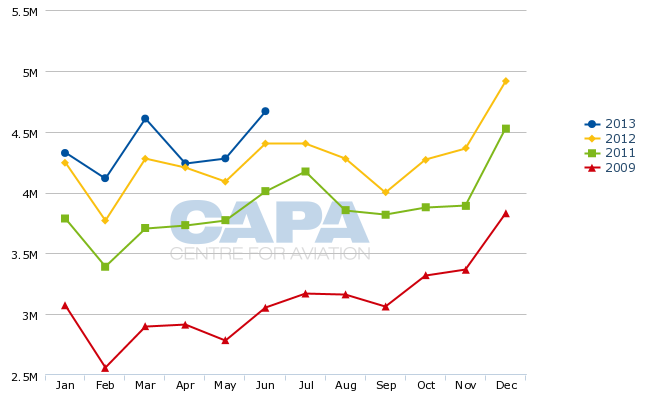 Singapore looks to build on its leading regional hub status

In announcing the plans for a fifth terminal Mr Lee cited competition from other major airports in Southeast Asia, specifically noting Kuala Lumpur International and Bangkok Suvarnabhumi. Both airports are relatively new and have ample space for more runways and terminals. Both cities also have secondary airports which can be used to alleviate congestion, an alternative Thailand has already turned to as it has not yet moved forward with a third runway and terminal expansion at Suvarnabhumi.

As Singapore has just the one airport it is more critical for Changi to get ahead of the curve.

Changi already has over 630,000 weekly international seats within Southeast Asia. This gives it a larger international regional presence than KLIA, Suvarnabhumi or any other airport in Southeast Asia. But to continue its lead position in the fast-growing Southeast Asian market, Changi needs the space to handle more flights, particularly narrowbody flights as it is the short-haul market that is growing the fastest and is needed for Singapore to maintain its status as a leading regional hub.

Singapore has seen a huge influx of regional flights over the last several years. But this has been a double edged sword – while it has helped establish Changi as a regional hub and as an LCC hub it has led to a disproportionate increase in narrowbody movements. This in turn has led to the current runway congestion issues.

From 2007 to 2013 commercial aircraft movements increased by 40%, from 231,900 to 324,700. In the same period passenger movements were up 36% from 37.7 million to 51.2 million. As CAPA wrote previously: “This is not a perfect measurement as freighter movements are included in these figures but it illustrates the general drop in average aircraft gauge at Changi as LCCs have expanded rapidly, leading to the current runway congestion challenge. The rapid growth of LCCs is clearly behind this trend.

Narrowbody carriers have accounted for almost all of the growth at Changi in both movements and total passengers since 2004, when Singapore’s budget carrier boom began with the launch of Tiger and Jetstar Asia.”

LCCs have accounted for about three-quarters of Changi’s growth since 2004. During this period they have increased their share of total capacity from essentially zero to 31% currently. LCCs now account for about 35% of all scheduled movements at Changi, accoring to Innovata data.

Changi has benefitted from the competition between three major budget airline groups. The Tigerair group currently accounts for 10% of total seat capacity at Changi while the AirAsia Group accounts for 8% and the Jetstar Group 7%.

All three continue to grow in Singapore, particularly Tigerair as its Singapore-based subsidiary adds another seven aircraft in the current fiscal year. The other 6% of capacity which is controlled by other LCCs includes SIA’s medium/long-haul low-cost subsidiary Scoot, which currently only accounts for 2% of total capacity at Changi but has huge growth potential. 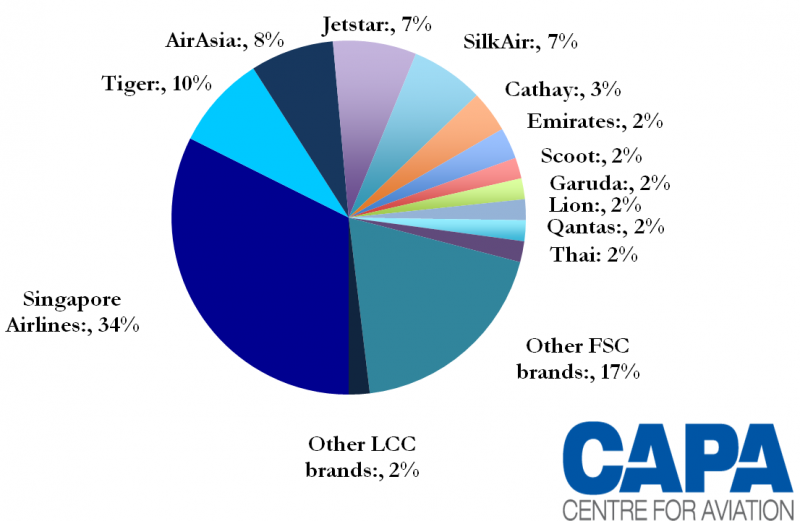 The SIA Group accounts for a leading 43% share of capacity in the Singapore market, including the 2% share for Scoot, about 34% for SIA and about 7% for SilkAir.

Scoot and SilkAir, both of which only operate within the Asia-Pacific region, are currently the group’s growth vehicles and SIA mainline capacity continues to increase only marginally.

Regional growth and connectivity, including between LCCs, will define Changi over the next decade. Singapore is now finally taking the steps needed to be accommodate this growth.

With Southeast Asia’s economy booming and other airports in the region generally slow in moving forward with promised expansion, Changi will be looking to maintain its status as the leading hub in ASEAN.