Many of the world’s biggest airports have been reticent about saying how the pandemic will affect their long term infrastructure planning, but Singapore Changi Airport has been more forthcoming, admitting that its huge T5 project is under review. The fifth terminal was due to be completed in the 2030s and would be capable of accommodating 50 million passengers per annum in its initial phase.

A recent statement by the Singaporean Transport Minister, Khaw Boon Wan, is ominous for the industry: he has reported that his government will delay construction of a fifth terminal at Singapore Changi Airport for at least two years while it assesses COVID-19 impacts.

Changi was once the undisputed hub for the southern portion of the eastern hemisphere, but its full service network power has been partially eroded by other hubs in its region, and possibly undermined more so by the emergence of Dubai International Airport, and to a lesser degree by others in the Middle East.

There is no indication that the Changi Terminal 5 project will be curtailed, let alone cancelled, but a delay of this nature suggests that it could be.

Day by day news filters through of airports reopening, airlines restarting their operations, and borders opening again. But a recent statement by the Singaporean Transport Minister, Khaw Boon Wan, is ominous for the industry.

He has reported that his government will delay construction of a fifth terminal at Singapore Changi Airport for at least two years while it assesses COVID-19 impacts.

Mr Wan stated: "We have decided to take a pause for two years. Let us complete this study of the future of aviation".

He added: "We are consulting as widely as we can. Big questions remain, and we don't think we will get the answers very quickly within the next few months". The key words there are “this study of the future of aviation", not just “a reassessment of local demand”.

The fifth terminal was due to be completed in the 2030s and would be capable of accommodating 50 million passengers per annum in its initial phase.

When a terminal that alone is the size of an entire global hub airport is delayed for such a period of time, then the future of aviation is under close scrutiny and over the long term. There is no indication that the project will be curtailed, let alone cancelled, but a delay of this nature suggests that it could be.

In addition, Terminal 2 (T2) is being renovated, work which started in Feb-2020. That multi-year expansion project itself will add 15,500sqm to the terminal building and increase Changi Airport's capacity by five million passengers per annum. Works are scheduled for completion around 2024.

'The Jewel' is an attraction in its own right

Separately, the Jewel Changi Airport retail development was opened in 1H2019, and it arose as a consequence of the need to expand the capacity of Terminal 1, as well as its open-air car park.

This led to a strategic vision with the conception of The Jewel augmenting Changi Airport’s position as a leading air hub globally and boosting its appeal as a stopover destination for travellers.

The result was a mixed-use and ostentatious development with gardens, attractions, retail, dining, a hotel, and facilities to support airport operations. It is a terminal building in its own right but without flights – a sort of indoors version of Singapore’s famous botanical gardens, with a shopping mall bolted on. A pleasure dome that Kubla Khan could have decreed.

In its own right The Jewel stands as an attraction to visit Singapore, or at least to stop over there (Singapore Airlines was one of the first pioneers of the stopover concept). It is connected to terminals one, two and three and the MRT (Mass Rapid Transport) system.

The Jewel in relation to Terminals 1, 2 and 3

Separately again, Changi has created short-term measure Transit Holding Areas for passengers, which will feature entertainment and online shopping options As it prepares to start welcoming transit passengers in the near future as travel restrictions begin to ease following the global lockdown.

Travellers will wait in the in their connecting terminal and temperature checks will be carried out at the entrance.

Shoppers will be able to make purchases through Changi’s shopping concierge service, with orders taken via WhatsApp and delivered to the THA.

The THAs will be regularly cleaned and staff on-site will be following strict health and safety guidelines. Only specific personnel and those with relevant travel documents will be allowed inside the THA.

The fairly recent addition of T4, the renovation of T2 and the Jewel project should in themselves be sufficient to handle passenger traffic growth at Changi.

The chart below, of traffic over the last decade, shows steady but not exceptional growth, with the better years being at the beginning of the period. 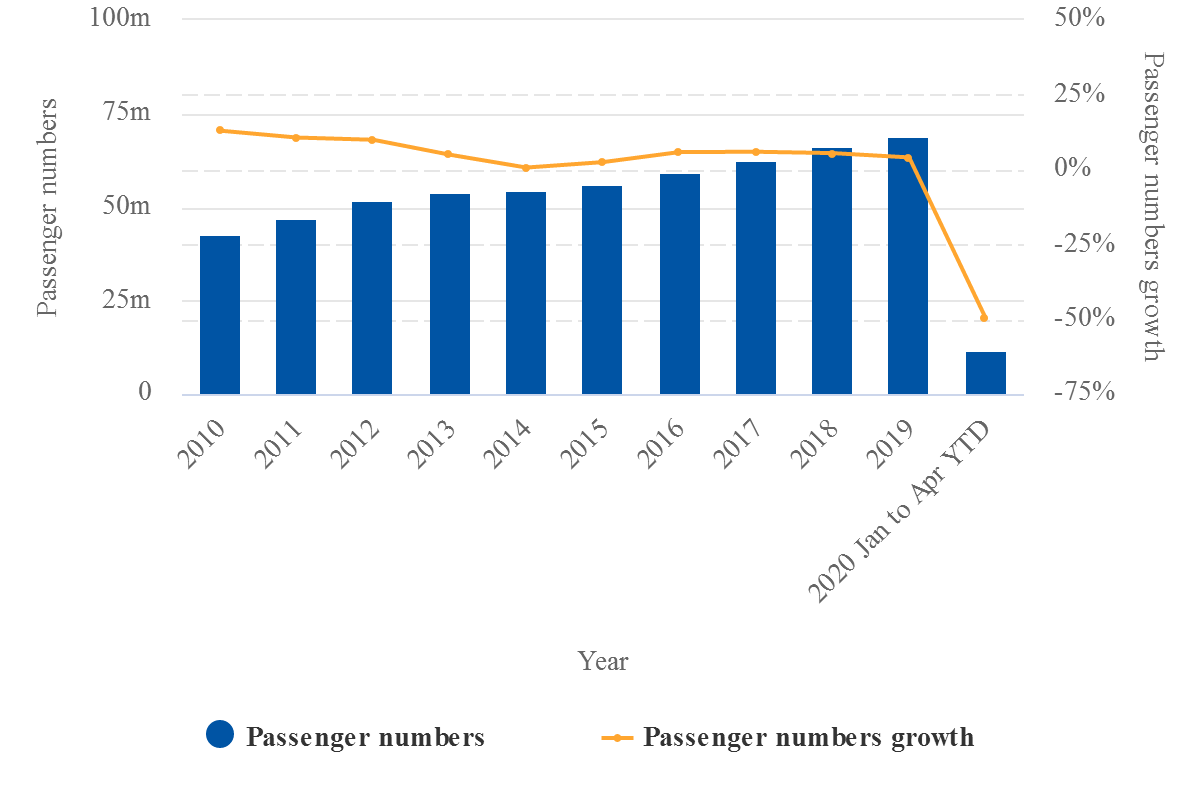 But Changi is ambitious. Once the undisputed hub for the southern portion of the eastern hemisphere, its full service network power was partially eroded by other hubs in its region, such as Bangkok and Kuala Lumpur.

Bangkok turned its former main airport into an LCC facility and Kuala Lumpur built a 'Taj Mahal' of an LCC terminal (to use the 'terminology' often employed by budget airline CEOs). Changi’s response was to close its own small and unimposing low cost facility, which it called simply ‘Budget Terminal’, and redirect services throughout the other terminals.

But Changi was possibly undermined more so by the emergence of Dubai International Airport, and to a lesser degree by others in the Middle East.

Now, with the suggestion that the entire industry may face years of consolidation, it has an opportunity to renew its influence. On the other hand, it might be able to do so within the ‘constraints’ of existing infrastructure.

So Changi has reached a milestone along with the rest of the industry. As with many other global-level facilities it has to include an assessment of a major and long-term development in its reaction to the current pandemic situation. Many other airports are being coy about their intentions but Changi has faced up to the reality that prestige projects not set for delivery for many years yet will have to be re-evaluated and possibly severely diminished.

Fraport plans to delay the opening of Frankfurt Airport terminal 3 from 2023 to 2024 or 2025 due to COVID-19. Construction of T3 pier G is ongoing and remains on schedule for completion in late 2021 for opening in summer 2022.

AENA CEO Maurici Lucena reported the company plans to invest EUR1.2 billion in infrastructure works in 2020 and 2021. AENA intends to develop a new incentive scheme in 2020/2021 to encourage air traffic resumption post COVID-19. The scheme includes reductions in charges for airlines exceeding a certain threshold of movements, adjusted monthly according to traffic forecasts. Airlines are expected to benefit by around EUR25 million from the incentive programme.