Singapore recorded the fastest growth in four years in 2016, driven by a surge in visitor numbers from China. The China-Singapore market grew by 15%, while total traffic at Changi Airport grew by 6%.

Changi should experience similar growth in 2017 as the airport makes final preparations for the new fourth terminal, which is slated to open in 2H2017. Inbound traffic from China will again drive a large portion of the growth in 2017, but Changi is also expecting growth in the emerging LCC transit segment.

Scoot is Singapore’s fastest growing airline and is extending its network to Europe in 2017. Changi may also attract new European routes from other airlines, but regional capacity expansion within Asia will again drive most of the growth.

Singapore Changi Airport traffic grew by 6% in 2016, to 58.7 million passengers, marking the fastest growth for Singapore since 2012. Changi recorded three consecutive years of double growth in 2010 to 2012, driven primarily by LCC expansion. 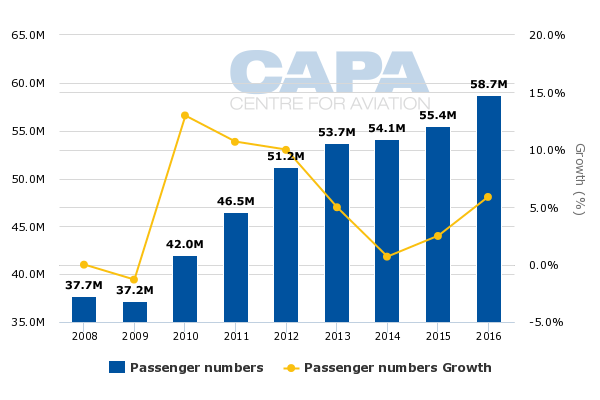 Passenger numbers have increased by 58% since 2009, when Changi traffic declined slightly due to the global financial crisis.

Changi was able to achieve 6% growth in 2016, despite a relatively sluggish local and global economy. Singapore’s GDP grew by only 1.7% in 2016, which represents the slowest economic growth for Singapore in seven years.

Changi was able to offset weakening demand in the local market by relying more on inbound visitor and transit traffic. Singapore reported an 8% increase in visitor arrivals in 2016, to 16.4 million. The 8% growth represented the fastest growth in visitor numbers to Singapore since 2012. 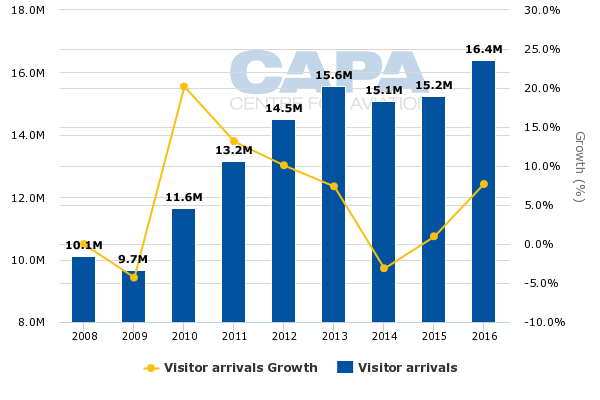 Visitor arrivals by air were up 7% to 12.65 million, according to Singapore Tourism Board data. Visitors therefore accounted for approximately 25.3 million passengers, or 43% of total traffic at Changi.

Chinese visitors accounted for over half of the overall inbound growth. Singapore reported 36% growth in Chinese visitor numbers (excludes Hong Kong) in 2016, to 2.86 million. 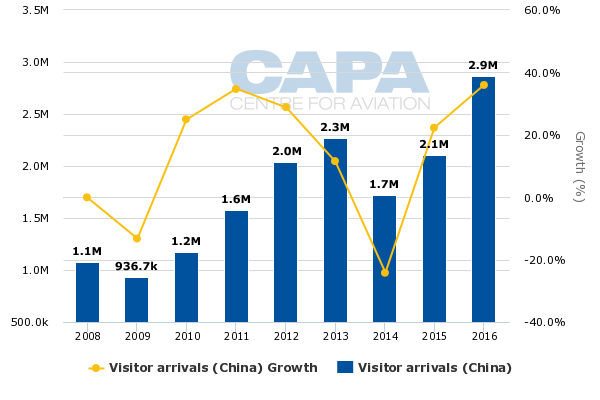 Chinese visitor numbers by air increased by 25% to 2.05 million. Some Chinese tourists combine Singapore with Malaysia and cross from Singapore to Malaysia by land.

India and Australia are the other top five source markets for Singapore’s tourism sector. Indian visitor numbers were up by 8% in 2016, to 1.1 million, with 900,000 arriving by air.

Singapore’s top 10 source markets based on % of total visitor numbers: 2016 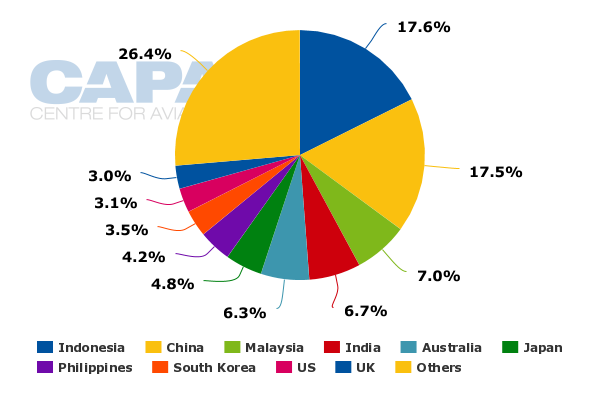 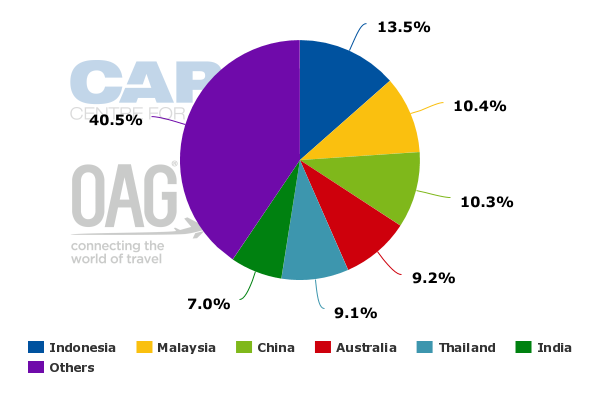 There are currently approximately 154,000 weekly seats between Singapore to China, according to CAPA and OAG data. Capacity is up by approximately 20% compared to late Feb-2016.

Changi has stated that 90% of the passenger growth achieved in 2016 was generated by routes within Asia Pacific. While China was the clear standout, Thailand and Vietnam also had healthy passenger growth of 6% and 8% respectively, driven by a surge in visitor traffic.

Vietnam and Thailand are also big transit markets for Singapore. A smaller proportion of China traffic is transit compared to the traffic from Vietnam, Thailand and other Southeast Asian markets.

Indonesia is a particularly large transit market for Singapore, and this explains why Indonesia is a larger market overall, although China provides more inbound air visitor numbers.

Historically the Singapore market has had a broadly even split of inbound, outbound and transit traffic. The outbound market has grown over the past several years as Singapore’s population, including expatriate and migrant worker populations, has expanded significantly, although a recent dip in expatriate numbers has likely impacted outbound demand.

Singapore successfully positioned itself in its early years as a hub for transit traffic. Singapore Airlines and its full service regional subsidiary SilkAir continue to rely on sixth freedom traffic for a majority of traffic.

However, SIA the parent airline has not grown over the past decade, and its passenger numbers increased by less than 1% in 2016 to 18.9 million. 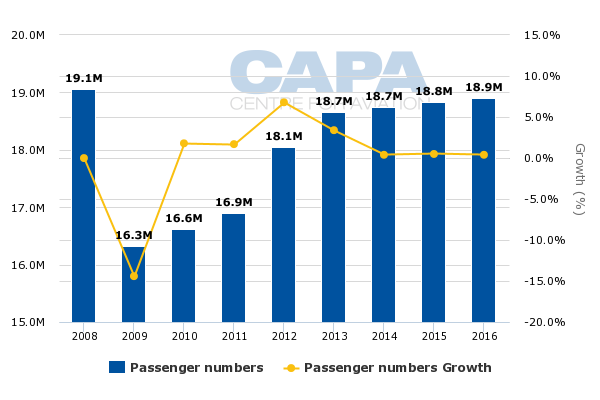 SilkAir has grown the fastest of Singapore’s short haul airlines

SilkAir has doubled its passenger traffic since 2008 and has been a significant contributor to the rise in Changi traffic during this period, accounting for approximately 20% of the growth. SilkAir captured a 7% share of total passenger traffic at Changi in 2016 as its traffic increased by 7%. 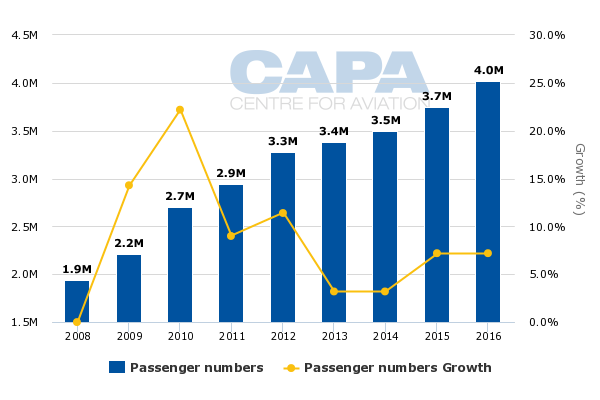 SIA Group short haul LCC subsidiary Tigerair accounted for almost a 9% share of total Changi traffic in 2016, but its traffic was up by only 1% compared to 2015. Tigerair has contracted slightly since 2014, when it responded to overcapacity by restructuring its network. Tigerair grew at a fast rate from 2011 to 2013, but over the past five years SilkAir has make a bigger contribution to Changi’s overall growth.

Singapore’s other short haul LCC, Jetstar Asia, has also taken a pause in its expansion since 2014. Jetstar Asia carried approximately 4.2 million passengers in 2016, giving it between a 6% and 7% share of total Changi traffic, after fifth freedom traffic is taken into account. Jetstar Asia passenger traffic has grown by less than 10% since 2013.

After driving most of Changi’s growth in 2010 to 2013, the short haul LCC segment has been relatively flat the past three years, forcing Changi to rely on other segments of the market for growth. SilkAir has continued to grow during this period.

Changi has also benefitted from rapid expansion by the SIA Group medium/long haul LCC subsidiary Scoot. Passenger numbers at Scoot were up 46% in 2016, but Scoot is still relatively small and some of its 3.2 million passengers from 2016 were carried on fifth freedom sectors that did not touch Singapore. Scoot accounted for approximately a 5% share of total passenger traffic at Changi in 2016.

Foreign airlines account for 42% of traffic at Changi, and in some cases have grown much faster than the local airlines. Airlines from the Middle East and North Asia have grown particularly rapidly.

In 2017 Changi will likely experience similar growth as in 2016, with similar trends. The Chinese market continues to grow, with both local and foreign airlines benefitting. While Changi has been able to attract new links to Europe and North America, these markets have not been growing overall, and Asia Pacific will once again account for almost all the growth in 2017.

In addition to its surging visitor numbers from China, Changi continues to grow transit traffic by tapping the emerging LCC transit segment. Jetstar Asia has significantly grown transit traffic, including connections with interline and codeshare partners, in recent years and continues to pursue growth in this segment. Scoot and Tigerair plan to boost transit traffic significantly in 2017, from a very low base, as they integrate their operations under the Scoot brand. Changi has already noticed an increase in self transfer traffic – primarily between LCCs.

2017 will be a landmark year for Changi, since it plans to open T4 in the second half of the year. The new terminal is relatively small, designed to handle up to 16 million annual passengers, and will be used by just a handful of foreign airlines with the AirAsia Group and Cathay Pacific as the largest tenants. However, T4 provides a testing ground for new technology which will be rolled out when the much larger fifth terminal opens, along with a third runway next decade.

Singapore is back on the growth trajectory and has proven there are opportunities for growth outside the LCC segment. The small country of five million is investing significantly in airport expansion, as the fifth terminal and third runway will increase Changi’s capacity from 85 million to 135 million in the initial phase.

Annual passenger traffic exceeding 100 million may seem far fetched, but Singapore wants to be ahead of the growth curve and offer airlines the capacity to support growth while other airports in the region face capacity constraints.

Changi will cross the 60 million passenger threshold in 2017 and should be able to achieve average growth in the mid to high single digits over the next several years, matching the average growth rate achieved since 2009.

For the 2017 outlook on all Singapore based passenger airlines see the following recent analysis reports from CAPA: