North Asia is an important market for Singapore and its airline sector as the Singapore-Southeast Asia market is showing signs of maturity and overcapacity after several years of rapid LCC-driven growth. The Singapore-North Asia market is relatively unpenetrated and could be stimulated as medium-haul LCCs expand and discretionary income levels in China continue to grow.

This is Part 3 in a series of analysis reports on the Singapore market and the outlook for Changi Airport, which recorded passenger growth of only 0.7% in 2014.

Part 1 of this report analysed the slowdown in Singapore’s low-cost airline sector and the recent drop in traffic and LCC seat capacity in the short-haul Singapore-Southeast Asia market.

Part 2 looked at the Singapore-Europe and Singapore-Middle East markets, in particular the rapid expansion at Changi of the Gulf carriers and the upcoming reduction in capacity by Singapore Airlines (SIA) as it introduces premium economy. This report focuses on the Singapore-North Asia market.

North Asia was the second fastest growing region for Changi in 2014 after South and West Asia. Passenger traffic between Singapore and North Asia grew 4% to 13.78 million in 2014. This follows growth of 7% in 2013.

The traffic growth to North Asia in 2014, while slightly slower than 2013, is impressive as it came despite a significant slowdown in the Singapore-China market. Singapore experienced a sharp reduction in visitor numbers from China in 2014 due to the Malaysia Airlines MH370 incident and the civil unrest in Thailand, which reduced outbound demand in China for trips to Southeast Asia. Singapore was impacted as a large portion of Chinese tourists in Singapore combine Singapore with a stop in Malaysia and/or Thailand.

China visitor numbers started recovering in 4Q2014 but were still down significantly for the year. Through the first 11 months of the year total visitor numbers from China were down an alarming 26% to 1.6 million, according to Singapore Tourism Board data. This includes an 18% reduction in visitor numbers by air to 1.3 million. (Some Chinese residents cross into Singapore by land from Malaysia as part of holiday itineraries that combine the two countries.)

The Singapore Tourism Board has not yet reported figures for Dec-2014 or the full year. But the full year certainly saw a large double digit drop in visitors from China, ending a string of four consecutive years of growth. Singapore recorded 25% growth in China visitor numbers in 2010, 35% in 2011 and 29% in 2012, driven by the opening of the country’s first casinos.

Growth slowed to a still impressive 12% in 2013. China is now the second largest source market for Singapore’s tourism sector after Indonesia. 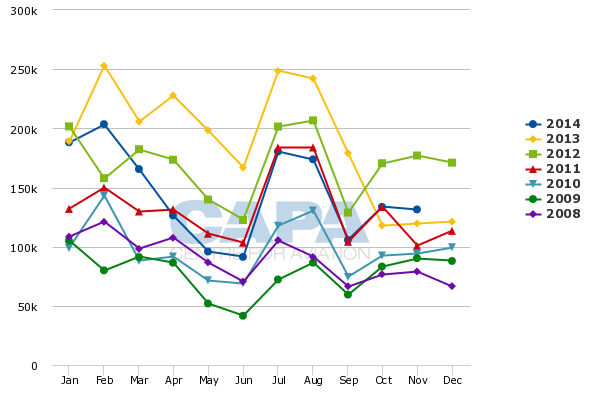 Changi does not provide a country by country breakdown for its North Asia passenger figures but stated that monthly passenger figures in the Singapore-China market were up in October, November and December, including a 1% increase in Dec-2014. The pick-up in 4Q2014 is not surprising given the recovery in visitor numbers in the last quarter of the year. But again this compared to a low base in 3Q2013 and it is unlikely Singapore-China passenger numbers in 4Q2014 were above 4Q2012 levels.

China visitor numbers and Singapore-China passenger traffic will almost certainly increase in 2015 but there may not be a full recovery to 2013 levels.

Singaporean visitor numbers in China also have been on the decline

The Singapore-China market also has seen a drop in outbound visitor numbers to China in recent years. 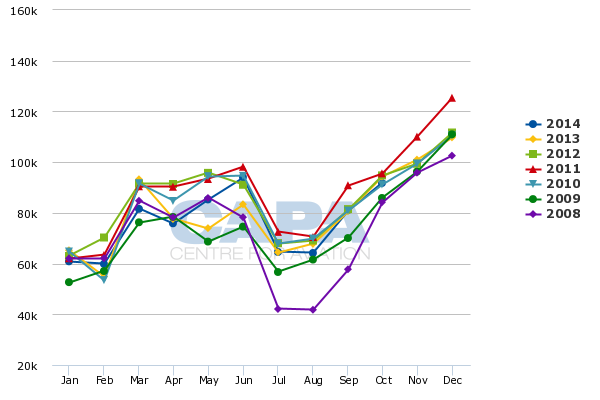 Singapore-China seat capacity is currently down about 7% compared to Feb-2014 levels. Capacity between the two countries, which fluctuates depending on the season, increased significantly in 2011 and 2012 before moderating in 2013 and 2014. 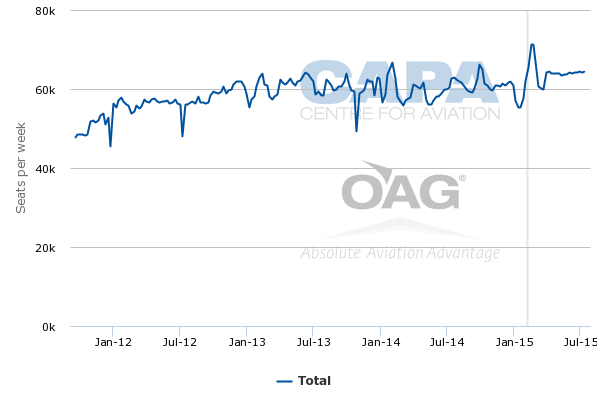 China is a crucial market for Singapore. China currently accounts for about 9% of total seat capacity from Singapore, making it the fifth largest market behind Indonesia, Malaysia, Thailand and Australia. Changi also identified China as its fifth largest market based on passenger figures in both 2013 and 2014.

Singapore and its airlines, particularly the LCC sector, are banking on the resumption of growth to China. SIA long-haul low-cost subsidiary Scoot is aiming to double its Chinese network from four to eight destinations over the next year.

Sister short-haul LCC Tigerair is also looking to further grow its network in China. Tigerair currently serves nine destinations in mainland China, six of which it has added since Oct-2013.

Tigerair is focusing on southern or central China and destinations within approximately five hours of Singapore while its partner Scoot is looking primarily at longer-range destinations in north and east China.

While SilkAir is also keen to grow its Chinese network further as it expands its new 737-800 fleet, the group’s LCC brands are generally better suited to open up new connections to secondary cities.

Singapore capacity from South Korea, Japan and Taiwan is growing

While capacity from Singapore to China and Hong Kong has dropped slightly over the last year, capacity has increased by about 7% to South Korea and by about 5% to both Japan and Taiwan.

South Korea has emerged as one of the fastest growing source markets for Singapore’s tourism sector, with visitor numbers up 14% through the first 11 months of 2014 to 496,000. After dropping in 2009, visitor numbers from South Korea have more than doubled over the past five years. 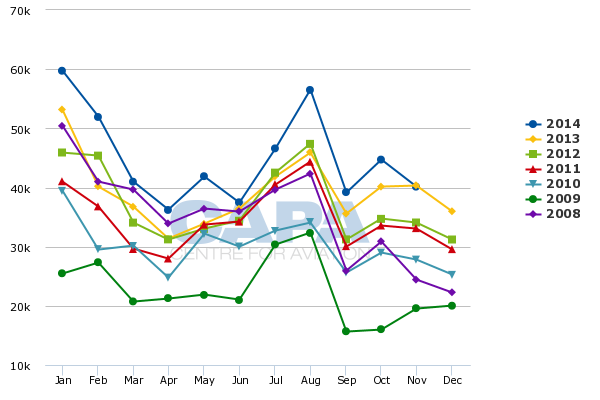 Singaporean visitor numbers to South Korea have also grown steadily since 2009 but on a lower base. 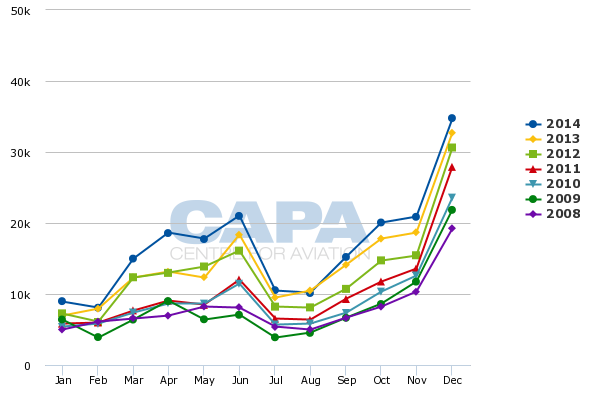 Further growth in the Singapore-Korea market is bilateral contingent

SIA operates four daily flights from to Seoul (one of which continues onto San Francisco) and Scoot three weekly flights to Seoul via Taipei.

Singapore has been trying to negotiate an expanded air services agreement with Korea for some time as there are no available rights for Singaporean carriers. There are some indications there could be a breakthrough, which is needed if the market is to grow further. The recent expansion by KAL in Singapore and the rise in visitor numbers should persuade Korean authorities to consider an extension.

Visitor numbers from Japan have also nearly doubled from 2009 to 2013 but were down by 1% in the first 11 months of 2014 to 752,000. Japan does not include Singapore in its breakdown of tourist arrivals but Japan overall has achieved a big spike in visitors including a 29% increase in 2014.

Capacity growth in the Singapore-Japan market in 2014 was driven by incremental expansion from SIA and JAL. Singapore-Japan capacity will increase further in 2015 as All Nippon Airways (ANA) recently unveiled plans to add a fourth daily flight to Singapore from Jun-2015.

ANA’s new Singapore schedule will feature two daily flights to both Tokyo Haneda and Tokyo Narita. JAL currently has three daily flights to Singapore (two from Haneda and one from Narita) while SIA has nine daily flights in the Singapore-Japan market (three to Haneda, two to Narita including one that continues to Los Angeles, two to Osaka, one to Fukuoka and one to Nagoya). Delta, United and Scoot also serves Narita daily with the Scoot flight operated via Taipei.

Hong Kong and Taiwan are popular destinations from Singapore

Hong Kong-Singapore is a huge aviation market with over 40,000 weekly one-way seats. But a large portion of the market is transit traffic on both ends.

Singapore needs a recovery in the China inbound market

Transit traffic beyond Singapore is an important component to the Singapore-North Asia market with Singapore particularly well positioned as a hub for Indonesia and Australia. But the transit component is smaller compared to other markets from Singapore.

While Singapore will continue to benefit from further growth in the Korea and Japan markets China is obviously the key growth driver for the future. As Singapore’s second largest source market for tourists it is critical that inbound growth from China resumes.

One feature that will almost certainly emerge in the medium term is that China's emerging LCCs will start to spread their wings, becoming a serious part of the growth profile. Singapore is not currently served by any Chinese LCCs as Spring Airlines pulled out of the market in 2014 after a brief stint on the Shanghai-Singapore route. In future China's growing crop of LCCs will likely focus more on connecting secondary cities in China with Singapore, a fast-growing market that Scoot and Tigerair are also targeting.

The likely return of rapid growth from China will further accelerate growth in the Singapore-North Asia market and lead to a pick-up in the overall passenger growth rate at Changi.