Singapore Airlines Group reported an 58% year-on-year increase in operating profit for the third quarter of its 2010/11 financial year, with a result of SGD509 million. Net profit was SGD288 million, down 29% from the same period last year.

During the quarter, a SGD199 million provision was made in the quarter for fines imposed relating to the ongoing investigation for anti-competitive behaviour in the air cargo market. SIA Cargo has accepted the plea offer made by the US Department of Justice, it has filed appeals against fines imposed by the European Commission and the South Korean Fair Trade Commission, and intends to contest these fines. Excluding the fines, group net profit improved by 21%.

SIA’s outlook was highly cautious, with the carrier reporting advance passenger bookings for the final quarter of the FY2010/11 levelling off, as airlines continue to inject capacity. The air cargo market will continue to be dominated by the two-speed global economic recovery, with strength in the Asia Pacific and uncertainties in Europe markets. Growth for airfreight is expected to continue for the rest of the financial year, albeit at a slower rate.

The carrier noted jet fuel prices are at two-year highs and trending up. Fuel remains the biggest expense item for the group.

Shares in Singapore Airlines were flat in trading on Friday, while most other peer full service carriers in the region traded down. All Nippon Airways was down 0.3%, with Qantas slipping 0.4%, Cathay Pacific down 1.2% and Korean Air losing 2.6%.

Shares in Japan’s Skymark Airlines rose 3.6%, while Asiana Airlines was up 0.4%. 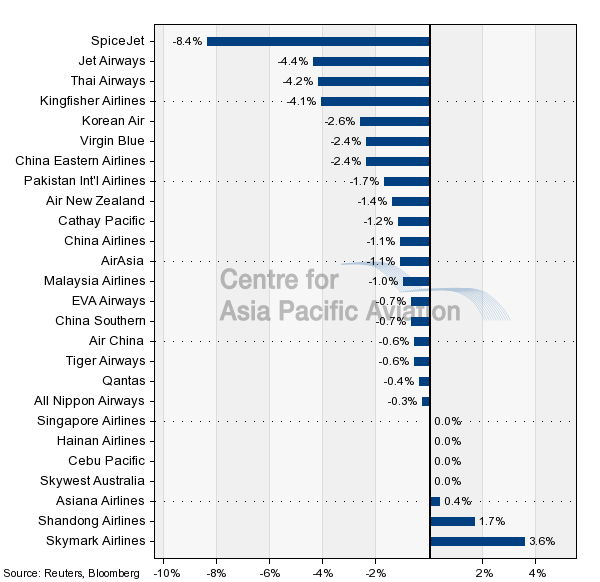