Singapore Airlines (SIA) may have to start reducing its employee numbers, following the lead of other carriers like Qantas, as its March traffic showed no sign of improvement.

SIA is already removing 17% of its fleet starting this month and has reduced its Summer 2009 schedule. The carrier has implemented a reduction in employee work days and reduced management salaries. The next step, if demand fails to improve, is to ground more aircraft and start reducing its headcount to move its overheads more in line with the reduced scale of its operations.

SIA has been silent on the potential for job cuts, but noted it would “continue to monitor traffic changes and make appropriate adjustments to its route network where necessary to match capacity to demand.

No end to passenger drop off, cargo in a trough

Passenger numbers declined a massive 23% in Mar-2009, to 1.3 million – the carrier’s worst monthly fall to date amid the current global downturn. 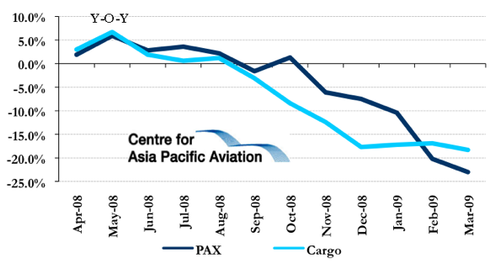 SIA’s passenger load factor plummeted 11.4% to 69.4% (the second consecutive month below 70%), as the carrier failed to reduce capacity fast enough (-9% reduction in ASKs). Traffic last March was boosted by the early Easter. 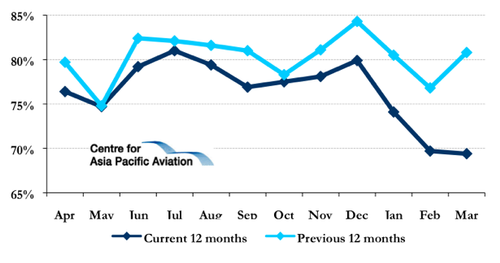 The carrier stated the year-on-year capacity decline resulted from the planned reduction in frequencies across many route regions due to the softer demand, as well as the use of the smaller B777-300ER on the San Francisco service (via Hong Kong). Additionally, the termination of Los Angeles (via Taipei), Osaka (via Bangkok) and Amritsar services also contributed to the capacity reduction. 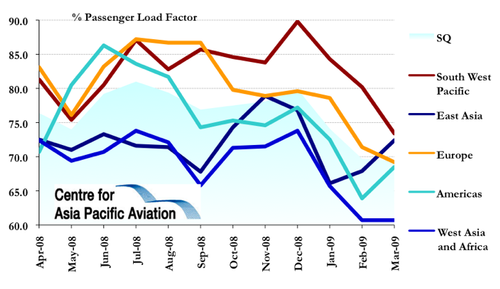