Singapore Airlines, the world’s second-largest carrier by market value, reported a 29% reduction in net profitability in 3Q2010 (three months to Dec-2010) as it booked charges relating to antitrust cargo fines in the US, EU and South Korea. Taking out the USD155.5 million in exceptional items, the carrier, which is 55% owned by Singapore state investor Temasek Holdings, would have reported a 20.7% increase in its quarterly profit, as a recovery in the global economy boosted air travel.

The airline industry, particularly in Asia, has enjoyed a strong rebound in recent months, but rising competition from Asian and Middle Eastern carriers are putting more pressure on Singapore Airlines. The carrier is also facing increasing competition from LCC revivals in the region, such as Tiger Airways (partly owned by Singapore Airlines) and AirAsia, which are rapidly growing on the back of improved travel demand amid a recovering economy.  Jetstar has also stated it would boost Asia capacity by 30% this year.

Source: Centre for Asia Pacific Aviation and SIA Group
* Based on the conversion rate USD1 = SGD1.28653

During the quarter, Singapore Airlines made a SGD199 million (USD156 million) provision for cargo-related fines. SIA Cargo was fined USD48 million by the US in Dec-2010, EUR74.8 million (USD103 million) by the European Commission in Nov-2010 and KRW3.l billion (USD2.78 million) by the South Korean Fair Trade Commission. Singapore Airlines stated that while SIA Cargo has accepted the plea offer made by the US Department of Justice, it has filed appeals against the fines imposed by the EC and South Korean Fair Trade Commission.

Jet fuel prices, which are at two-year highs, also had a negative affect on earnings as fuel remains the company's largest expense. Expenditure on fuel before hedging increased by SGD154 million (USD120 million) in the quarter due to higher fuel prices. Labour costs were also up by double digits in the quarter.

Passenger yield up 15.2% for third consecutive quarter of growth 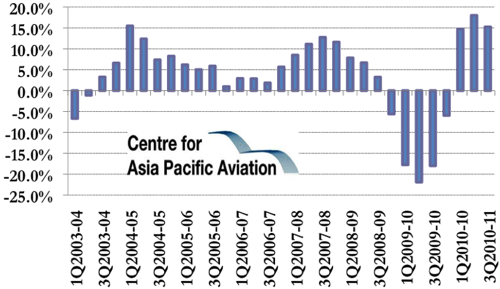 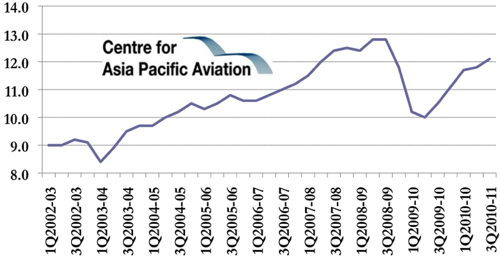 Cargo yield increased to a lesser extent, up 2.0% to USD 27.67 cents. This follows three quarters of double-digit yield growth. 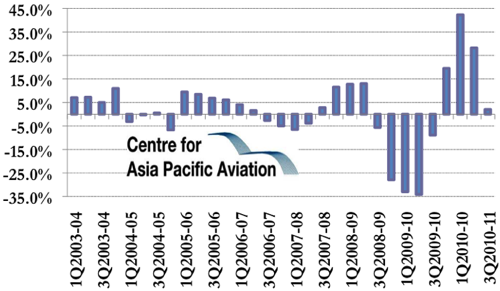 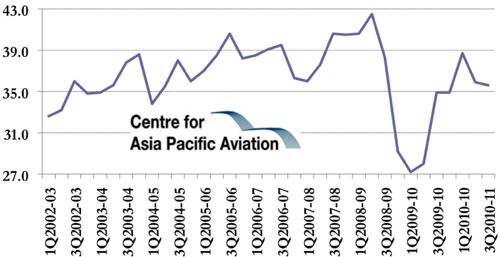 Operating profit increased 58% to USD396 million as a 12.4% increase in revenues outpaced a 7.6% increase in operating costs. The operating margin of 9.9% in the month was the highest since 3QFY2008. 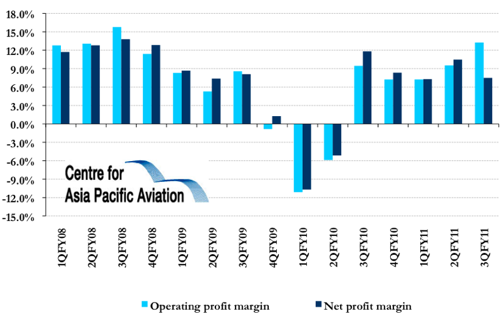 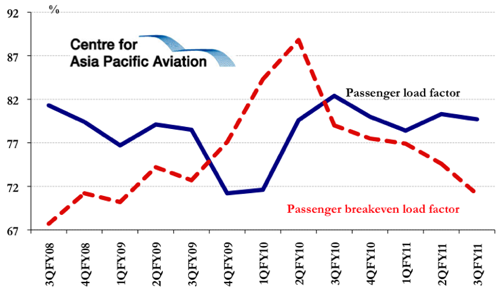 Singapore Air’s advance passenger bookings for the quarter ending in March are “levelling off” with growth in air cargo also expected to slow. This has occurred as airlines, including SIA continue to inject capacity. Singapore Airlines increased passenger capacity by 3.7% in the Dec-2010 quarter. 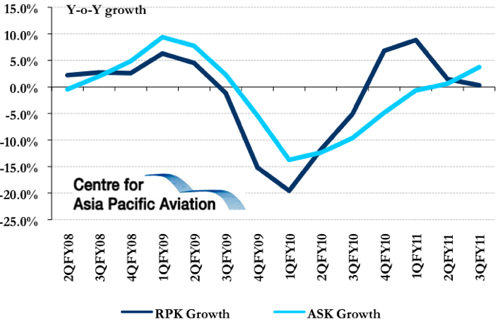 The Dec-2010 quarter results were the first to be released under new CEO Goh Choon Phong after Chew Choon Seng retired as CEO at the end of last year. Mr Goh will be expected to retain the flag carrier’s global superiority and continued prosperity, while simultaneously maintaining the reputation of Singapore Airlines as a premium airline, even despite a rapidly shifting industry foundation and confronts rising competition in the fast-growing yet highly competitive Asian market.

A number of challenges exist for the new CEO with the outlook for 2011 still remaining quite uncertain. As the carrier noted in its financial release: “As airlines including SIA continue to inject capacity, advance passenger bookings for the final quarter of the 2010-11 financial year are levelling off. For air cargo, regional differences will continue to be marked in 2011 with strength in Asia Pacific and uncertainties in Europe markets. Growth for airfreight is expected to continue for the rest of the financial year, albeit at a slower rate. On the cost side, jet fuel prices are at two year highs and trending up. Fuel remains the biggest expense item for the group.” 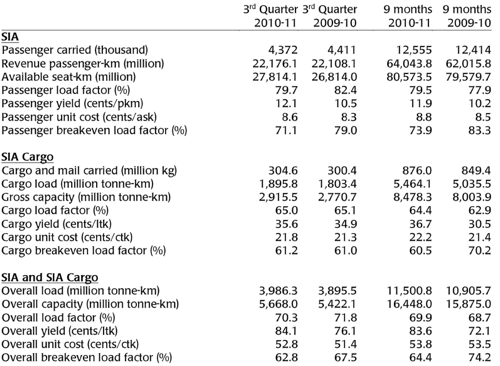