Thai Airways' shares recovered losses earlier in the week with a 10.3% spurt yesterday, as the airline made the (surprise) announcement of the commencement of five times weekly Bangkok-Oslo service from 15-Jun-09. Perhaps Oslo was the best of a bad range of options for Thai to deploy its fleet of four unwanted A340-500s? The aircraft have mainly been on the ground since Thai pulled heavily loss-making non-stop services to New York late last year. Thai can’t find a buyer for the aircraft.

Investors were seemingly buoyed by Thai’s expansionist move amid the gloom. The carrier was earlier reported to be considering whether to reduce capacity this month on routes to some European countries and South Korea. Thai Airways also plans to increase non-stop Bangkok-Los Angeles service from four times weekly to daily from 01-Jun-09, subject to an assessment of the impact of the swine flu.

Another Star carrier, Singapore Airlines, enjoyed another 5.5% rise in its share price yesterday, after Tuesday’s 4.5% gain on hopes the Singaporean economy can rise from the ashes. 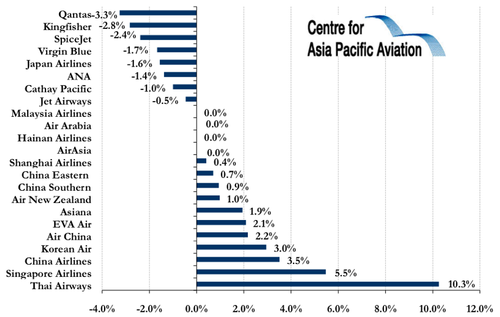