Mexican airport operator, Grupo Aeroportuario del Pacifico (GAP), gained 4.9% as it outperformed its competitors, OMA and ASUR, in its latest traffic release, reporting a single-digit decline in passenger numbers in Aug-2009, at -7.7%, while its major competitors, OMA and ASUR, continued to report double-digit traffic declines, at -12.9% and 12.8%, respectively. GAP Aug-2009 traffic highlights are as follows:

In Europe, airport shares were mixed yesterday, as Europe’s full service carriers reported weakness towards the end of Aug-2009.

ACI-EUROPE reported traffic results for 106 of its member airports in Jul-2009, which showed traffic remaining at suppressed levels.

According to ACI-EUROPE Director General, Olivier Jankovec, “things aren’t so much improving as getting less worse. The vast majority of European airports continue to lose traffic, albeit at a slower pace than earlier in the year. The real ray of light comes from the trend in freight traffic, which is substantially above the-20% barrier for the first time this year. However, this cannot yet be called a recovery.”

ACI-Europe traffic highlights in Jul-2009 were as follows: 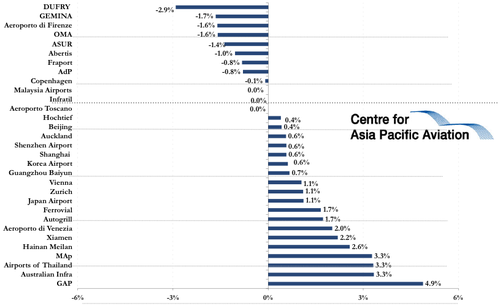