Shares in Lufthansa remained flat on Friday, as the carrier released its traffic results for Sep-2009. Passenger numbers increased 24.9% year-on-year for the month (thanks to the inclusion of bmi and Austrian Airlines) and the group maintained a steady load factor of 80.2%.

Austrian Airlines, which now reports its traffic as part of Lufthansa, recorded a 7.8% year-on-year reduction in passenger numbers. The carrier’s load factor has remained stable at 77.9%. Shares in Austrian Airlines were down 0.7% on Friday.

Meanwhile, Lufthansa announced it is reducing the number of weekly flights for Northern Winter 2009/10 by 7.4% year-on-year. However, capacity (ASKs) will remain stable (+1.1% year-on-year) as the German carrier withdraws smaller regional aircraft to deploy larger types. Lufthansa plans to operate 12,406 services per week this Winter, compared to 13,402 in 2008/09. The downsizing will occur in the continental route network, with a reduction of 996 weekly services to 11,282 per week, while the intercontinental route network will increase by 22 weekly services to 1,146 per week.

Elsewhere, shares in SAS gained 2.9% on Friday. SAS’ pilots are reportedly willing to take a 10% reduction in wages, which would cut costs for the carrier by approximately EUR21.5 million p/a. Talks between SAS and pilots are ongoing. SAS stated it would not comment on the negotiations.

Meanwhile, Ryanair reportedly announced it is considering plans to acquire Aer Lingus as a vehicle to purchase bmi from Lufthansa. According to CEO, Michael O’Leary, Aer Lingus would continue to operate from primary airports, including London Heathrow, using bmi’s slots, while Ryanair would continue to service secondary airports. 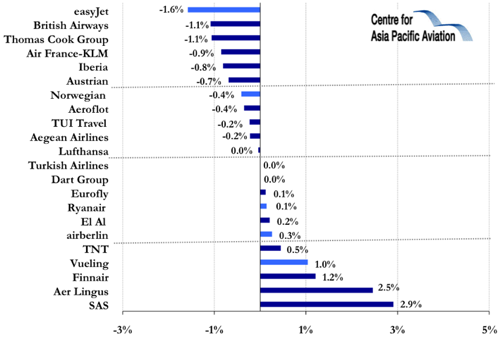