Shares in India’s listed airlines fell heavily in trading yesterday, as the sector faces concerns over high levels of competition and capacity on key routes, falling fares and rising oil prices. The Bombay Stock Exchange’s Sensex 30 Index fell by 1.7% yesterday, as did the broader BSE-200.

Shares in SpiceJet continued a five-day downward run, falling 11.4%. The decline follows the carrier reporting a 13% decline in net profit for the three months to 31-Dec-2010 last week. Revenue in the period rose 27%, while the airline also posted its highest-ever quarterly passenger load factor of 87.8%. Passenger traffic rose 33%. SpiceJet has announced plans to raise capacity by as much as 40% this year, thanks to funds brought in from investment by Indian billionaire Kalanithi Maran and KAL Airways, which increased their stock in the carrier to 39% in Nov-2010.

Kingfisher Airlines shares gave up 8.7% in trading and have now fallen 30% this year. The carrier recently announced plans to re-introduce seven narrowbody aircraft to its fleet by Mar-2011 and lease at least eight additional aircraft over 2011.

Jet Airways stock dropped 8.0%, the fourth consecutive day of negative trading. Shares in the carrier have dropped 27% for the year. The carrier announced early this week that it will use USD400 million qualified institutional placement to pay down debt and will not allocate funds from it to buy more aircraft, as it does not want to weaken its balance sheet. Jet Airways has an aggressive fleet and network growth strategy and is looking to target more European and Asian cities using Delhi and Mumbai as hubs. 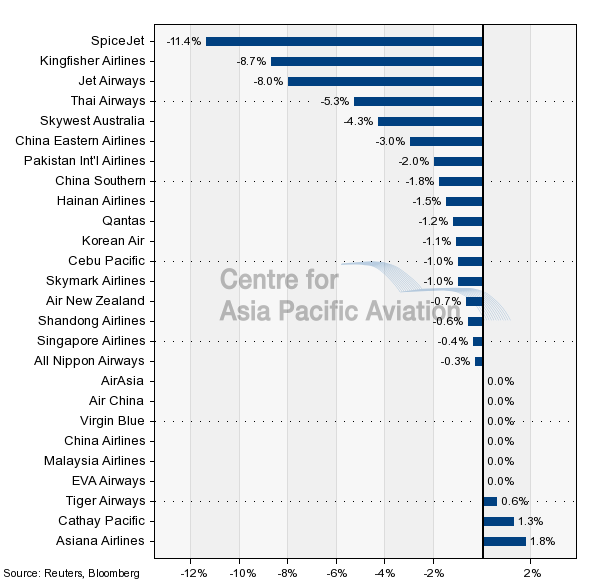