Seoul Incheon airport has turned 15, having first opened in late Mar-2001. The all-new airport has accumulated 49 million passengers since then, making it the fifth largest major hub in Northeast Asia. Incheon is now setting its sights on 2030: it plans to double passenger volumes to 100 million, including 20 million transfer passengers. This is nearly a tripling of 2015's 7.4 million transfer passengers who made up 15% of total throughput.

Increasing the share of traffic as transfers to 20% will be difficult: transfer passengers have been on the wane at Incheon. The total transfer volume decreased in 2014, and in 2015 was still below the 2013 peak. The 15% transfer share in 2015 is below 2014's 16% and 2013's 19%. The growth in direct seat capacity from mainland China to North America has pressured Incheon's transfer business; Beijing Capital airport will likely exceed Hong Kong's North America capacity by the end of 2016 while Shanghai Pudong is not far behind.

Taipei Taoyuan has also emerged as a North America hub. Tokyo Narita joins Seoul Incheon in experiencing decreased transfer volumes as new hubs grow to challenge the incumbents. This is a pressing matter for Incheon but overall its outlook is bright, and the 100 million goal is attainable. Incheon is notable in Asia for being a hub airport adding capacity ahead of demand.

Seoul Incheon ended 2015 with an accumulation of 49.3 million passengers in its first 15 years, making it Northeast Asia's fifth largest major hub. Incheon's fifth place has remained unchanged since 2004: it overtook Tokyo Narita but was then surpassed by Shanghai Pudong. The passenger throughput at Shanghai Pudong was higher by 21% in 2015; at Hong Kong by 39%. Tokyo Haneda's rose by 53%, and at Beijing Capital there was an increase of 82%.

Incheon aims to double its traffic over the next 15 years, ending 2030 with 100 million passengers, cumulatively. But first Incheon wants to be one of the world's five largest airports by 2020. In 2015 Incheon was the 21st largest, according to CAPA's airport rankings. (Being one of the five largest for international passengers is a more attainable goal.)

Incheon is one of the world's rare major airports that have been continuously built ahead of demand: Incheon expects that it will reach maximum capacity in 2017, but its second passenger terminal to open during 2017/2018 will bring capacity to 62 million. 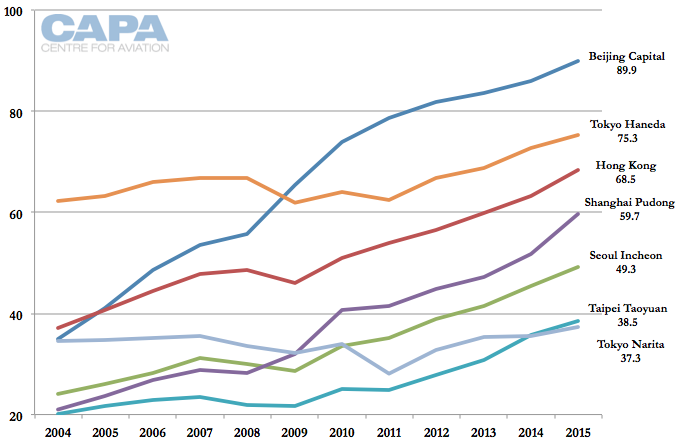 Without the MERS crisis, Incheon could have grown twice as fast 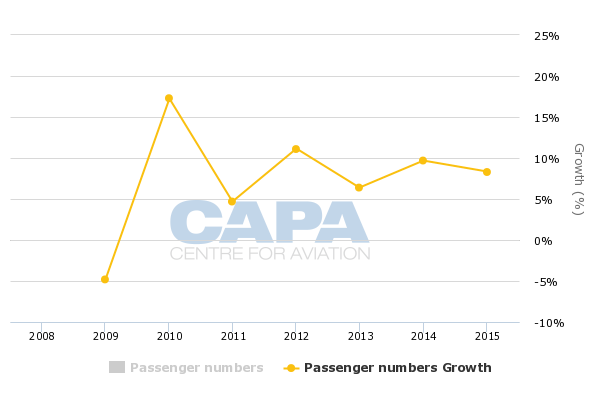 Yet Incheon's growth in 2015 could have been double that figure. Growth in the period Jan-2015 to May-2015 was 17% higher. This abruptly ended in Jun-2015 with the outbreak of MERS, which Korea initially struggled to contain – both the outbreak and the foreign public perception of what actually presented minimal public risk.

The resulting punishment was a slide in passenger figures: Jun-2015 and Jul-2015 passenger throughput slipped below 2013 levels. Fortunately the rebound was swift and Aug-2015 was only 1% below Aug-2014 levels. The Sep-2015 to Dec-2015 period actually shows 10% growth, faster than the annual average but well below the 17% growth observed at the start of the same year.

The MERS crisis occurred during what is usually the summer peak, when travel is significantly higher. Excluding Jun-2015 to Aug-2015, Incheon grew 14%. Without MERS, it would have likely been able to maintain its 17% trajectory. Growth in passenger throughput for the period Jan-2016 and Feb-2016 has been 14%. 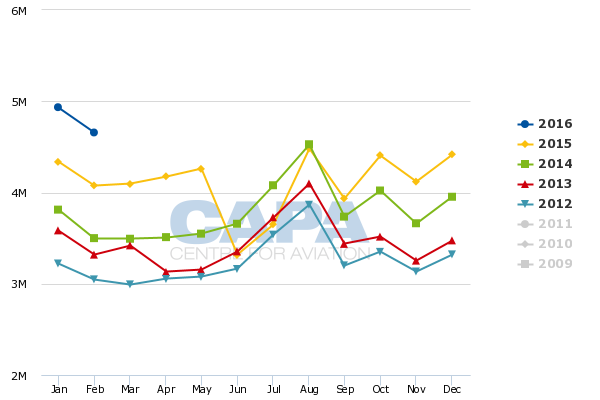 Seoul Incheon wants to boost transfer traffic from 15% to 20% 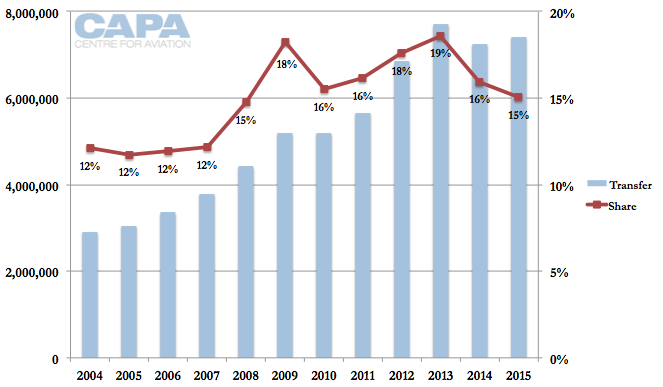 Two of the factors affecting Narita were Tokyo Haneda's international expansion and the capacity reduction by US airlines at Narita. 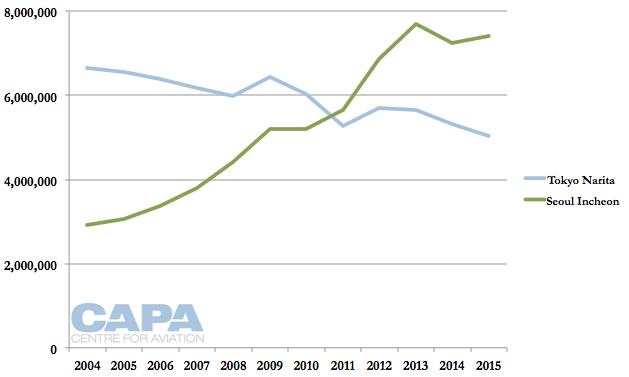 In contrast, Incheon has minimal domestic traffic. The share of passengers transferring as a share of total was greater at Incheon than at Narita in 2013, but this has since reverted in favour of Narita. Still, the gap between Incheon and Narita has significantly narrowed. 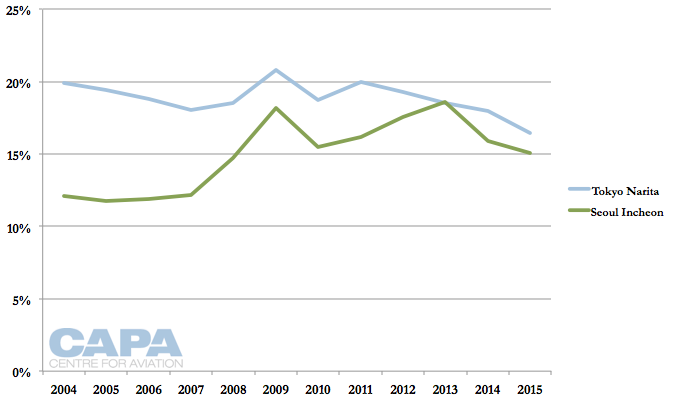 The transfer situation is the result of mixed circumstances. Positively, Korea as a destination has become significantly more popular, allowing Asiana and Korean Air to sell Seoul as a destination rather than a transit point, especially for passengers from China. This brings wider benefit to all of Korea since passengers are entering the country and spending money, instead of making a quick transit at the airport.

On the negative side, growth from elsewhere in Asia – chiefly mainland China – is putting pressure on the transit market that Seoul Incheon and Tokyo Narita have relied upon. The two airports were especially focused on mainland China-North America traffic as well as Southeast-North America. The increasing number of nonstop flights between mainland China and North America has pressured sixth freedom hubs. 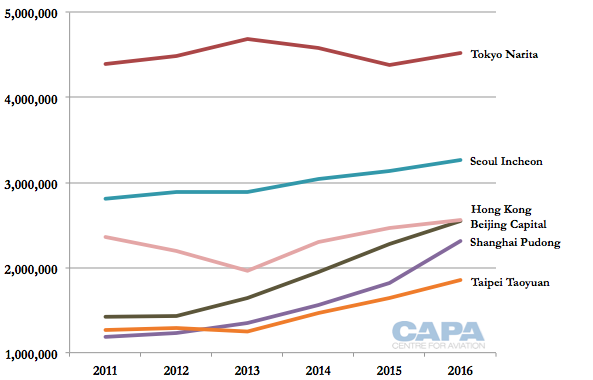 The expansion of North American capacity from Beijing Capital, Shanghai Pudong and Taipei Taoyuan is evident on the growth chart below. Traditional North American gateways of Hong Kong, Seoul Incheon and Tokyo Narita are experiencing slower growth, or, in some years – contractions. 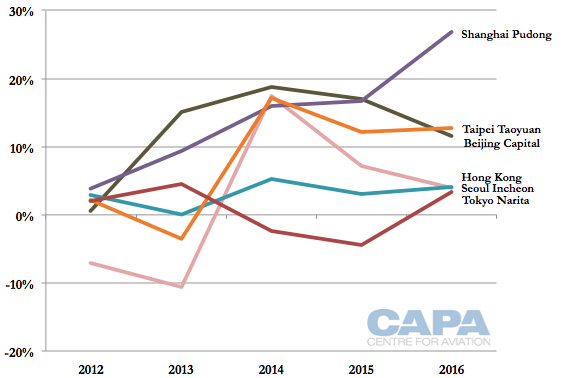 Incheon can easily reach its 100 million target for 2030, but transfer volumes are more challenging 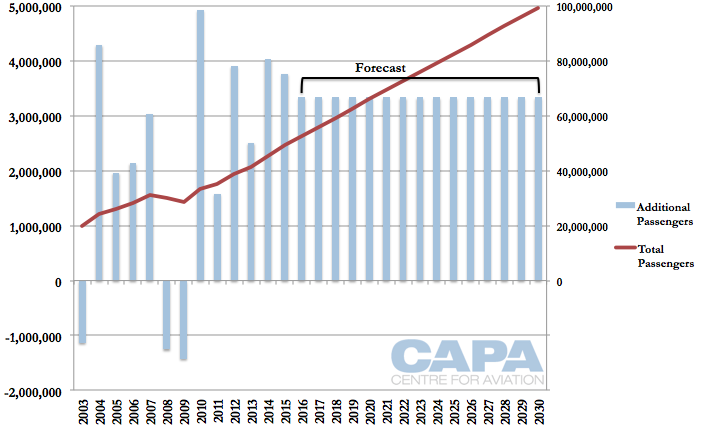 Less comforting is the transfer passenger objective. Growth will need to be higher to achieve this, and there is greater competition for this volatile and lower-yielding segment. It is dependent on air services agreements, and Korea is desperately in need of a significant expansion with China. Korea is unlikely to take part in ASEAN open skies, which would open Incheon to the fifth freedom flights for Southeast Asian airlines that have agreements in place with North American countries.

Fifth freedom rights would allow those airlines to supplement passengers originating elsewhere in Korea. Singapore Airlines (for one) would be keen to expand in North America via Seoul Incheon (its daily Seoul Incheon-San Francisco service is limited to 777-300ER and cannot be upgauged to A380).

Incheon has been hoping that Delta and Korean Air will form a partnership resulting in more Delta flights at Incheon and Korean Air having the role as a transfer partner.

Outlook: passenger traffic is strong but cargo is waiting for a recovery

Growing the transfer segment may be difficult for Incheon. In 2015 Incheon set about making increased transfer passengers one of its priorities, but this is still at an early stage. Overall, the passenger segment is robust at Incheon and the outlook is bright. It could reach its 100 million traffic projection significantly ahead of plan.

Not so rosy is cargo. Incheon is relatively a larger cargo hub than it is a passenger one, but with the downturn in the cargo industry, this has become less important. Still, Incheon had bet strongly on its cargo capability – allocating an entire runway just for cargo flights – and although cargo volume has grown in recent years, it is still below its 2010 peak.

Cargo heavyweights Asiana and Korean Air have yet to come up with a long-term plan for cargo. Then again, few others have. The situation with cargo across Asian airports is generally not an upbeat story.

Cargo's weakness has dampened investors' interest in Korean aviation. This arguably undermines the passenger segment. Incheon has a successful marriage: a marriage of high demand with the creation of capacity, in time and efficiently. Few other airports can make such claim.