SAS posted another pre-tax loss in 2QFY2014 after a weak 1Q result. For 1HFY2014, its pre-tax loss before non-recurring items was more than three times that of the same period a year earlier. It continued to make good progress with its 4XNG cost reduction programme, achieved further load factor gains and improvements in labour productivity and aircraft utilisation. However, the positive effect of these factors was wiped out by plummeting yields, attributed by SAS to overcapacity in Scandinavian markets.

In response to the weakening revenue and profitability environment, SAS has announced a new cost savings target and is taking action to "win the battle for Scandinavia's frequent travellers" through improvements to its product offering. Its recent re-capitalisation gives it more time to attempt to build a sustainably profitable business, or at least one that may become part of the next phase of European consolidation (whenever that might be).

In 2QFY2014 (Feb-2014 to Apr-2014), SAS reported a pre-tax loss of SEK1,078 million (EUR121 million), more than three times the loss of the same period a year earlier. The 2Q loss last year was exacerbated by losses on the disposal of Widerøe and so the underlying comparison with last year is even more dramatic. The 2QFY2014 pre-tax loss before non-recurring items was SEK1,076 million (EUR121 million) versus a loss of SEK6 million a year earlier (excluding Widerøe from 2QFY2013). 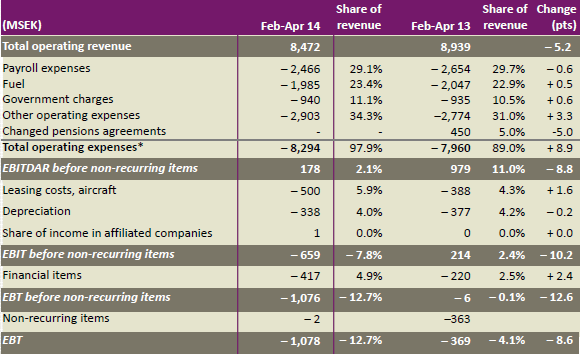 Scheduled passenger capacity, in ASK terms, increased by 4.2%. The increase was slightly higher on short-haul (domestic +4.6%, Europe/intra Scandinavia +4.5%) and slightly lower on long-haul (+3.4%). Overall scheduled RPK growth was 6.2%, so that load factor increased by 1.4 ppts to 71.4%.

The strongest growth in RPKs was in Europe/intra Scandinavia (+10.2%). On long-haul routes, traffic growth was similar to capacity growth (+3.8%), while the domestic networks saw demand growth (+1.0%) fall short of capacity growth.

Unit revenues plummet as yields fall due to overcapacity

In spite of the load factor gain, currency adjusted passenger revenue per ASK plummeted by 8.9% year on year in the quarter (similar to the drop in 1Q), due to a 10.6% drop in currency adjusted yield. Moreover, SAS' load factor remains low compared with levels in the high 70s achieved by members of the Association of European Airlines in the same period (and even higher levels for LCCs) and still has significant scope for improvement.

On a conference call to discuss the 2Q results, SAS CEO Rickard Gustafson told analysts that there was an overcapacity situation on routes to, from and within Scandinavia. In the 12 months to Apr-2014, seat growth in these markets had exceeded passenger growth by around 50%. He said that this had led to yield pressure and that further yield declines were expected.

Mr Gustafson added that the yield problem was most noticeable on Scandinavia to Europe and that, on short-haul markets, there was more direct capacity than demand. On intercontinental markets, he saw more demand than direct capacity. He said that Norwegian's long-haul operations had not "stolen that many passengers from us" so far, but had taken traffic that had previously connected via other European hubs.

Although SAS expects further negative yield pressure, Mr Gustafson said that market capacity growth was easing relative to last autumn and winter (Ryanair has reduced capacity in Scandinavia), although he did not yet have a clear view on the next winter season. Forward bookings were in line with expectations, with load factors good (but not rising much further).

Number of available seats and passengers, to from and within Scandinavia: 2QFY2013 versus 2QFY2014 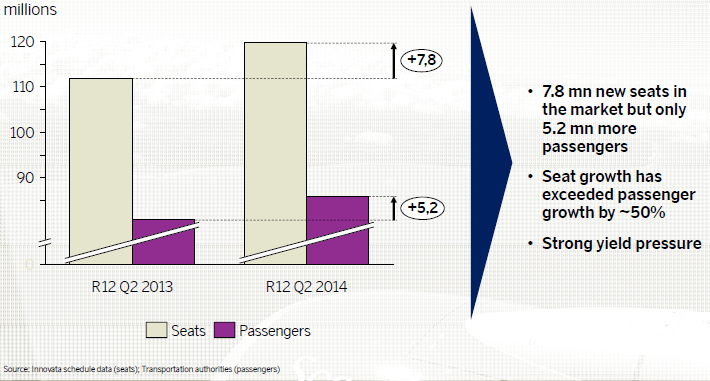 Group revenues fell by 14.7% year on year in 2QFY2014, but this is partly due to the Sep-2013 disposal of Widerøe, whose results were in the prior year results, but not in this year's. Excluding Widerøe, the drop in sales was 5.2%, or 6.3% adjusted for currency. This decline in sales contrasts with a 4.2% increase in ASKs and reflects the yield weakness noted above.

The weakness in yield is further highlighted in the chart below, from SAS' 2QFY2014 conference call presentation. Excluding Widerøe and currency movements, traffic revenues in 2QFY2014 were SEK498 million lower than in 2QFY2013. The positive impact of capacity growth and load factor gains was more than offset by the fall in yield. 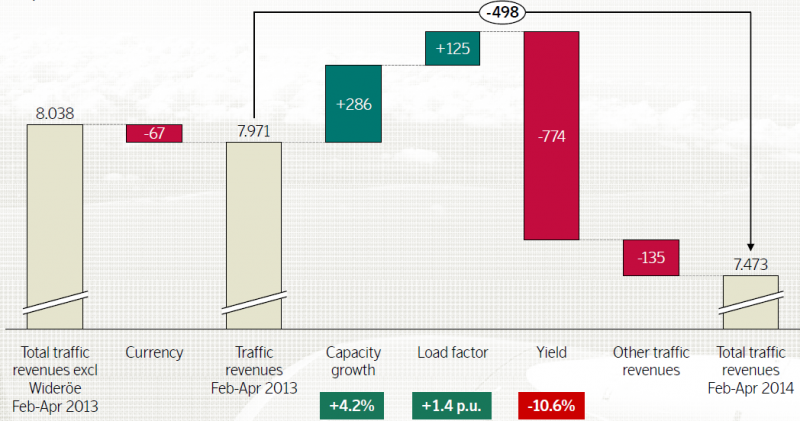 Are improvements to the customer proposition contributing to weaker yields?

It seems that SAS was only able to fill its increased capacity through price discounting, in spite of its efforts to enhance its customer proposition. SAS faces a significant challenge in further raising its load factor, in spite of its relatively low current level, without further yield reduction. Actions to enhance its offer include improvements to its EuroBonus FFP (including new partnerships), a new lounge at Oslo and new fast tracks at Stavanger and Trondheim.

They also include initiatives that add capacity, such as 11 new routes and increased frequencies on what SAS calls "critical business flows". Such initiatives may have appeal to business passengers, but the ongoing negative yield development suggests that it is difficult to sell this additional capacity without discounting.

Moreover, SAS has put its low price calendar and vacation planner back on its website – two elements that it highlights as part of its efforts to strengthen its customer proposition – but this would seem to increase the risk of generating lower yields.

Total group operating costs were reduced by 5.9% year on year, less than the fall in revenues. Excluding Widerøe and currency, costs fell by 2.8%, in spite of the increase in capacity, but this cost reduction was not enough to compensate for the 6.3% fall in revenues on the same basis.

SAS has performed well in lowering labour costs, which fell by 6.3% excluding Widerøe, currency and restructuring costs. Group headcount fell by 13.2% year on year to 12,217 due to the Widerøe disposal, outsourcing and the centralisation of administration.

Adjusted for currency effects and Widerøe, fuel costs declined 4.3% and other operating expenses decreased 1.3%, which was mainly attributable to lower catering costs and government user fees, but higher maintenance costs for engines. SAS said that its 4XNG cost restructuring programme achieved savings of SEK320 million in the quarter. 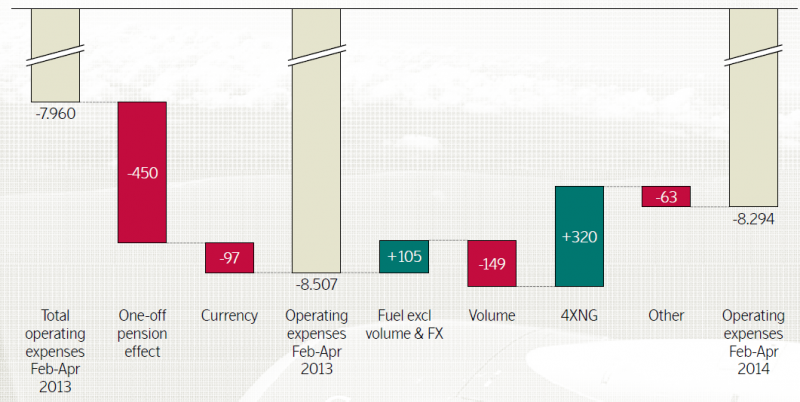 SAS points out that other European airlines have reported yield pressure and wider losses in the first quarter of calendar 2014. Nevertheless, it argues that is not just standing still and taking the hit, saying that initiatives to strengthen its customer proposition have helped it to increase its load factor and regain market share. 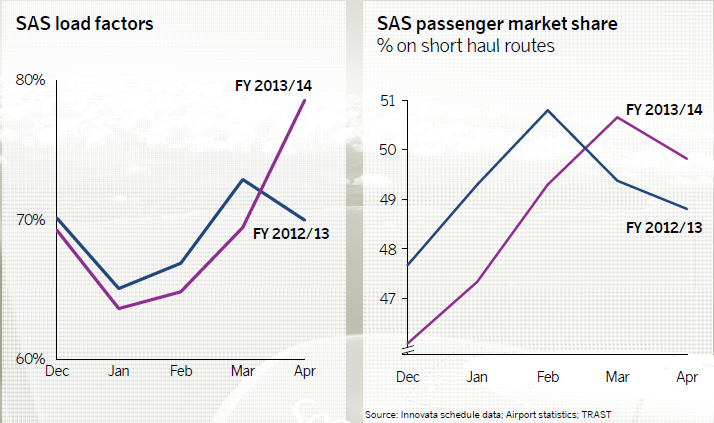 In addition, its cost restructuring programme continues to deliver unit cost reduction and it is recording improvements in aircraft utilisation, punctuality and cabin crew productivity. However, the deteriorating revenue trend has prompted Mr Gustafson to take further action in three areas. 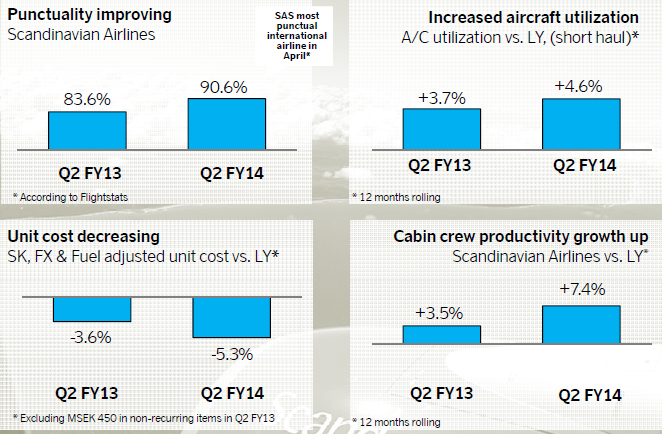 The first action is to set a target to achieve additional cost savings of SEK1 billion by 2015 and further savings by 2017, to be quantified this autumn. These savings will be on top of the SEK3 billion targeted by 2015 under the 4XNG programme.

The initial target will include the reduction of a further 300 white collar jobs, with a review of (and improvements in) areas such as sales and distribution, supply chain management, tech shop management, ground services and crew productivity. This will require a restructuring provision, which has yet to be quantified, but which will lower SAS' 2014 pre-tax result. 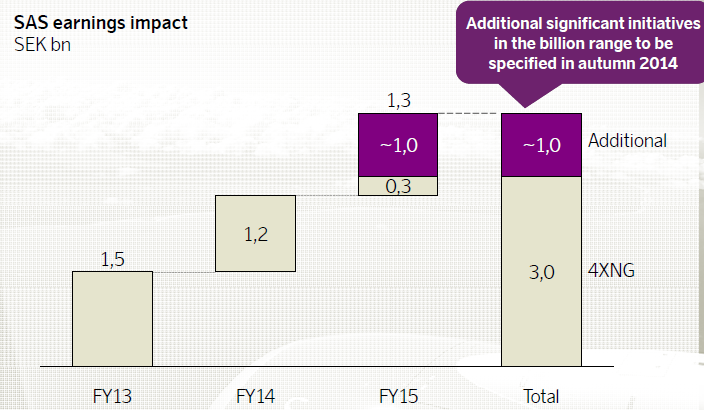 The battle for frequent travellers

The second area is what Mr Gustafson calls "wining the battle for Scandinavia's frequent travellers" through adjustments to the network and the development of SAS' digital platform to improve efficiency and grow customer satisfaction.

This will see an increased focus on point to point routes with high demand from frequent travellers, served by SAS' own aircraft, supplemented by wet leased capacity to serve thinner routes. The airline plans to capture growth in off-peak leisure demand through increased utilisation.

The long-haul operation will see new point to point destinations at Oslo and Stockholm and three additional widebody aircraft brought into the fleet in 2015/2016. A direct route from Stavanger to Houston will also be opened, serving oil industry demand.

SAS' third initiative will see it invest in aircraft, cabin upgrades and digital technology. It plans a total investment of around USD3 billion in aircraft, with 12 widebodies (four A330E and eight A350) due for delivery from 2015 and 30 narrowbodies (A320neo) from 2016.

The cabin upgrade will include new seats, including full flat beds in long-haul business class, and upgrades to interiors. This programme will amount to an investment of around SEK500 million and the first new cabins will operate in early 2015. Around SEK500 million will also be invested in the digital transformation.

SAS' worse than expected 2Q results put some pressure on its FY2014 outlook. It still expects a positive pre-tax result, but this is now only likely before the impact of the yet-to-be-defined restructuring provision. The key weakness in the first half of the year has been falling yields and it is difficult to resist the conclusion that SAS' own capacity growth may be contributing to the overcapacity environment that has caused this.

See related report: SAS Group has a weak 1Q2014 as predicted, in spite of cost cuts. Is it time for capacity cuts?

In an attempt to increase its appeal to Scandinavian frequent travellers, it is keen to offer a wide ranging network and it will start 53 new routes in 2014 as it increases ASKs by 3%-4%. Mr Gustafson seems reluctant to scale back on growth for fear of permanent loss of market share.

Perhaps the best clue to his thinking came on the 2Q conference call, when he told analysts: "Europe needs consolidation… I won't speculate on when that might happen and whether SAS will be part of it, but we need to make sure we are in a strong position to participate".

It seems that Mr Gustafson is attempting a tricky balancing act to make SAS attractive to a potential acquirer or partner: market share versus profitability. It's a brave tightrope walk.