European airline shares were mixed on Monday (06-Sep-2010), as European carriers reported improved passenger numbers but declines in load factor for Aug-2010. Light trading in the wider market due to US markets being closed also confused airline shares for the day.

SAS Group was flat. During trading, the carrier announced it divested its remaining 19.9% shareholding in Skyways Holding AB. The shares were purchased by Largus Holding AB, which already owns the remaining 80.1% of the company. The transaction is part of a number of divestments performed in line with the core SAS strategy that includes simplifying the corporate structure. The transaction creates a capital loss for SAS Group of approximately SEK40 (USD5.5 million).

British Airways (-0.4%) slipped after news cabin crew reportedly voted in favour of another strike ballot during a mass meeting held by British Airlines Stewards and Stewardesses Association (BASSA) on 06-Sep-2010. A total of 3,400 voted in favour of the ballot, while 1,700 abstained. However, Bassa represents 12,000 of BA's 13,500 cabin crew.

The ballot will need to be approved by Unite before it can go ahead. Unite national officer, Brendan Gold, stated the union is hopeful a meeting with British Airways next week will resolve the issue, but if not a ballot will go ahead and a new strike is “inevitable”. Mr Gold added the new ballot is likely to cover three issues: imposition of changes to work practices, the dismissal of 14 cabin crew for alleged offences committed during the ongoing dispute and withdrawal of travel concessions. Mr Gold commented that the staff dismissals were a “disgrace”. A time frame for the ballot is yet to be established but strikes are likely to be held over the Christmas holidays.

BA responded stating it will be in contact with Unite. It also commented that BASSA does not have the authority to call a ballot. CEO Willie Walsh stated that he is “not worried at all” about another possible strike. Mr Walsh added that while he hopes cabin crew do not launch another round of industrial action, the carrier is working to ensure it can continue operations in such an event.

Lufthansa (-0.3%) also slipped despite CFO, Stephan Gemkow, stating the carrier plans to pay a dividend for 2010.

Elsewhere, easyJet (+3.1%) and Vueling (+2.5%) were big gainers for the day, after reporting improved passenger numbers for Aug-2010 during trading. Ryanair (-0.3%) fell despite passenger numbers rising 12.0% for the same month. Cimber Sterling (-3.5%) suffered the biggest decline of the session. 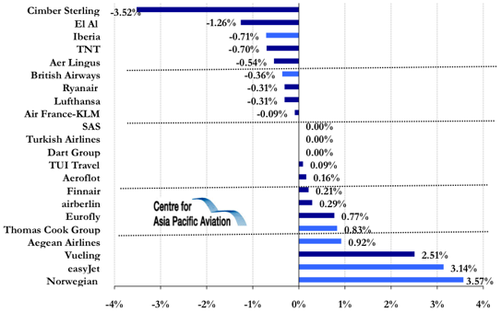