Another quarter, another fall in yield for Scandinavian Airlines, SAS. The Nordic region's largest airline reported a year on year decline in profits in 3QFY2014 and a fall into loss for 9M. It has made good progress with its cost reduction programme, but costs are not falling fast enough to offset tumbling yields and SAS remains one of Europe's highest cost airlines.

Healthy load factor gains demonstrate that SAS has some appeal to the Scandinavian frequent flyers that it desires, but price discounting remains a key feature of this appeal. Overcapacity in its markets has contributed to yield weakness, but its many LCC competitors are better positioned to provide the lower fares demanded by the market. In spite of some easing of the supply/demand imbalance, SAS expects continued yield pressure.

SAS' number one priority is an additional cost reduction programme, full details of which will be announced by the end of 2014.

Reported group revenues fell by 7.7% year on year to SEK10,967 million (EUR1,174 million), but the comparison with last year is distorted by the disposal of Widerøe, which was sold on 30-Sep-2013. Excluding Widerøe from last year's results, revenue actually increased by 0.7%. 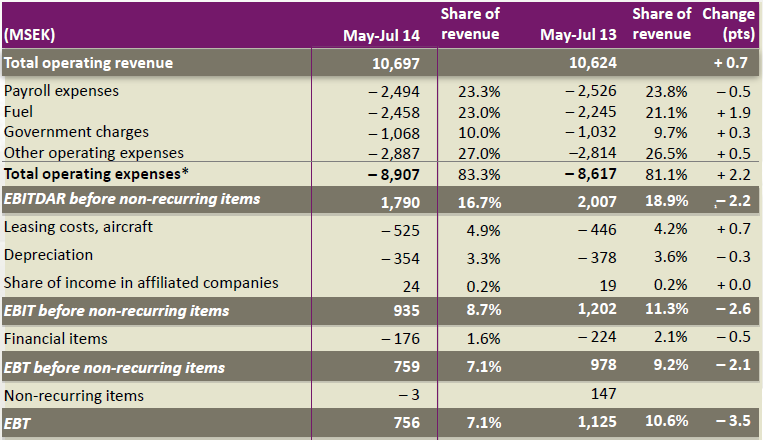 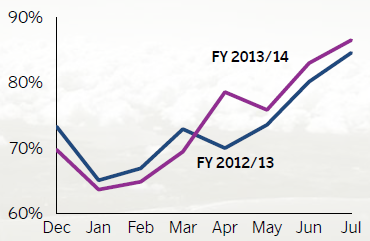 Capacity growth was strongest on Europe/Intra Scandinavia routes, where SAS increased scheduled ASKs by 9.7% in 3Q, and slowest on domestic routes (ASK +4.5%). On intercontinental markets, ASKs were up 4.7%, but RPK growth fell short of this, reaching only 4.0%.

SAS is more focused on short-haul than the major European network carriers, with more than two thirds of its ASKs operating in Europe and Scandinavia.

This brings it into frequent competition with LCCs, including those owned by the major groups. SAS' priority is to lower its cost base to make it more competitive, rather than to develop its own LCC.

CEO Rickard Gustafson told analysts on a conference call to discuss the 3Q results that he did not expect load factor to increase further, but that the airline aimed to maintain its high level through network optimisation. In the coming winter, he said that there would be a small decrease in capacity, but frequencies would be maintained.

This would be achieved partly through the increased use of wet leases to switch into smaller aircraft where appropriate. Wet leases are also being used to trial new routes, for example Oslo-Billund and Stavanger-Houston.

The overcapacity situation in Scandinavia, previously highlighted by Mr Gustafson, eased a little in 3QFY2014. According to data presented by SAS, compared with the same quarter last year, there were 0.8 million more seats to/from/within Scandinavia and 1.3 million more passengers. Nevertheless, in each of the previous four quarters, the additional number of seats had by far outstripped the additional number of passengers and he said "accumulated overcapacity [is] still significant".

SAS has been a contributor to capacity growth, but the biggest contributor has been Norwegian Air Shuttle (see chart below). In 3Q, airlines other than SAS and Norwegian actually reduced capacity and this was the reason for the trend reversing so that passenger growth exceeded seat growth. 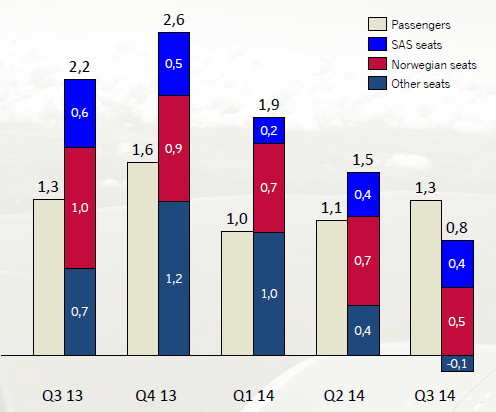 SAS is continuing with its efforts to attract and retain Scandinavia's frequent flyers, presumably to differentiate itself from LCCs, through what Mr Gustafson called "optimising the network". In 2014, SAS is launching a total of 40 new routes, has opened fast track security lanes in Bergen, Trondheim, Stavanger and Arlanda (T4 domestic). It has also improved lounge access and made changes to long-haul inflight menus.

These initiatives may have helped the load factor improvements that SAS has enjoyed since Apr-2014. In addition, the introduction of SAS Go and SAS Plus as its two new fare classes in short-haul markets has led to a 26% increase in the number of passengers in SAS Plus (the 'premium' fare category) in 3QFY2014 compared with 3QFY2013. The quarter also saw a 16% increase in the number of its EuroBonus FFP members flying with SAS.

SAS has plans to add further lounge capacity at Stockholm Arlanda and Oslo Gardermoen, to add more partners to EuroBonus, to open 10 more routes in 2015 and to expand and improve its digital customer communications platforms.

But SAS' currency adjusted yield has fallen 9.8% as it keeps discounting

Reported revenues were down by 7.7%, but, on a like for like basis (excluding Widerøe from last year's figures), revenues were little better than flat year on year, growing by 0.7% in 3Q, much less than the growth in ASKs.

Although initiatives to attract frequent flyers have had some success and load factor increased in the quarter (and in spite of slower growth in the market), yield took another tumble, falling 9.8% in 3Q and 9.1% for 9MFY2014 on a currency adjusted basis. Currency adjusted passenger revenue per ASK fell by 7.1% in 3Q, although this was a little better than the 8.5% fall in this indicator suffered in 1H (thanks to the load factor gains).

Currently, it seems that the only way for SAS to attract the customers that it seeks is through price discounting.

Mr Gustafson told analysts that he expected yield pressure to continue, although market capacity growth was expected to slow down. 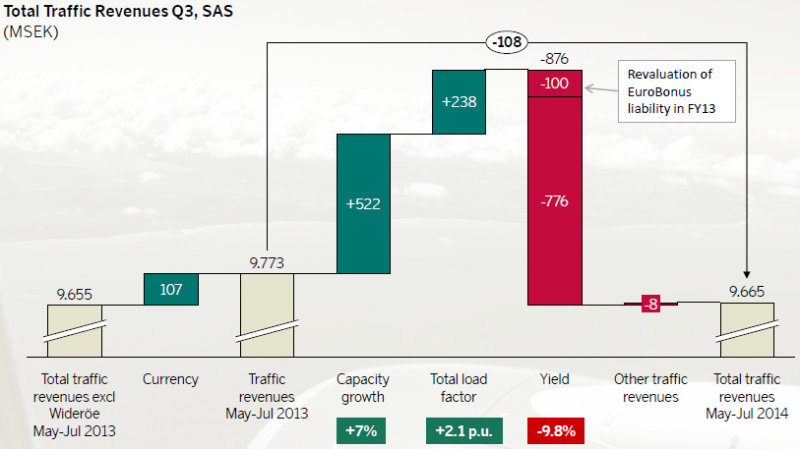 Reported costs before non-recurring items fell by 3.8% year on year, but increased by 3.7% if Widerøe is excluded from the prior year results. Either way, cost growth outstripped revenue growth, although the ex-Widerøe cost growth was less than the ASK growth. Reported fuel costs grew by 4.4% and non-fuel costs fell by 6.3%. Adjusted for currency and Widerøe, fuel costs were up 8.8% due to higher volumes and prices.

As previously announced, SAS will seek additional cost savings of SEK1 billion by 2015 and further savings by 2017. Full details of the additional savings will be provided by the end of FY2014, but will include the reduction of white collar headcount by around 250 full time equivalents, ground service efficiency improvements, a 50% reduction in operations for subsidiary Blue1 and the "right-sizing" of SAS' production model.

FY2014 will be worse than last year. Beware the next real downturn

SAS is still aiming to report a positive pre-tax profit figure in FY2014, before a provision for restructuring in connection with the additional cost savings. However, this target includes a one-off benefit of more than SEK1 billion in connection with changes to the pension scheme and so SAS looks very likely to report an underlying loss (in FY2013, its pre-tax result before non-recurring items was SEK775 million)

SAS' losses and year on year deterioration in profitability put it in the bottom half of the principal European airline companies in the first six months of 2014. The highly competitive market dynamics in Europe are showing no mercy to airlines that struggle to make a decent return.

Moreover, the global airline sector backdrop is still broadly one of a cyclical upswing. If SAS finds it difficult now, life will become much more difficult when the world moves into the next downturn.

At least it does not currently face an existential threat. The company's recapitalisation earlier this year has improved its liquidity and lowered its net debt. At the end of 3Q, its cash position of SEK6.9 billion was 37% of its past 12 months' fixed costs, well above its 20% target, and net debt fell over the course of the financial year by SEK3,225 million to SEK1,312 million.

Nevertheless, CEO Rickard Gustafson is very clear that more needs to be done to restore healthy and sustainable profitability. He is right to increase the focus on cost savings.