European airlines declined on Wednesday (31-Aug-2010) despite gains in wider markets, boosted by improved US consumer confidence data. Airlines were down as oil prices (+0.6%) continued their recent rebound, ending trading at USD74.70.

Norwegian (-3.2%), Cimber Sterling (-2.4%) and SAS (-1.5%) all declined for the day, despite increases in the Nordic share markets. During trading, it was announced that the airlines had reached a deal with Copenhagen Airport for a new price agreement, meaning the passenger charge for the airport's LCCT, CPH Swift, will be approximately 35% lower than the present passenger charge. SAS, Norwegian and Cimber Sterling represent approximately 88% of traffic at the airport.

Ryanair (+0.4%) was one of few airlines to gain for the day after announcing plans to close its Belfast City Airport base at the end of the current summer schedule on 31-Oct-2010, following the airport's confirmation that the public inquiry into the promised runway extension will be further delayed, thereby delaying yet again the launch of new Ryanair service from the airport to Europe. The runway extension was scheduled to be delivered in 2008 but has not been approved by the Northern Ireland Government, and will now be the subject of a delayed public inquiry, which puts back the runway extension to 2012 at the earliest. Ryanair operates five routes to the UK from the airport and had planned to launch longer haul services from the airport once the new runway was open. 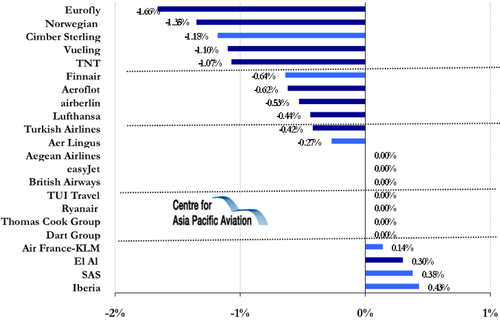